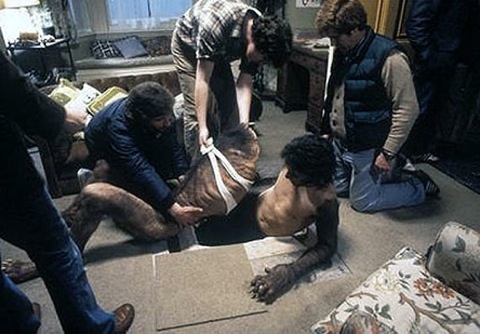 In the first of an occasional series we thought we would have a look at the story behind an on set photo and we thought we would start with a favourite of ours, the horror comedy, ‘An American Werewolf in London’ directed by John Landis. Here we look at the scene where David Naughton transforms into a werewolf in a tour de force of make up design by genius Rick Baker that had audience jaws dropping.

For the American Werewolf transformation scene lasting only a couple of minutes onscreen it took Baker and his team 6 days to film and perhaps even more surprising was that there were very few takes of each set up as each effect worked pretty much first time. Time was taken up more with the application of the various stages with a 4am call time for around 10 hours required to apply and 3hrs to remove and only about 10 minutes to shoot it on set.

That said there were days when Naughton found himself trapped underneath the floor of the set as the werewolf’s body was attached and blended to his upper body by spraying cold glue on his chest and applying layers of hair. The British crew somewhat in contrast to US crews were as supportive as you might expect telling Naughton not to complain as they had worked on David Lynch’s. ‘The Elephant Man’ previously and that John Hurt had had to wear that make up every day!!! 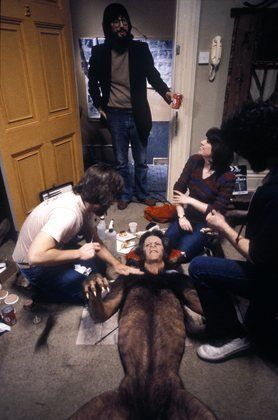 Many of the American Werewolf effects were actually simple in design but it was the actual materials that were to be pushed to their limit. Foam Latex was not elastic enough and Baker used a resin mixed to a weaker balance which made it more plasticised but would ultimately disintegrate. This allowed many of the stretch effects (hands ,feet and most remarkably the profile of the head elongating into a snout). Like so many of the best effects it was achieved by the simplest of ideas namely syringe like plungers using pressure where as one plunger was pressed down the other plunger would be forced out and stretch the hand or foot it was concealed in. It took months to experiment with but ultimately on the day it nearly always worked on the first take. 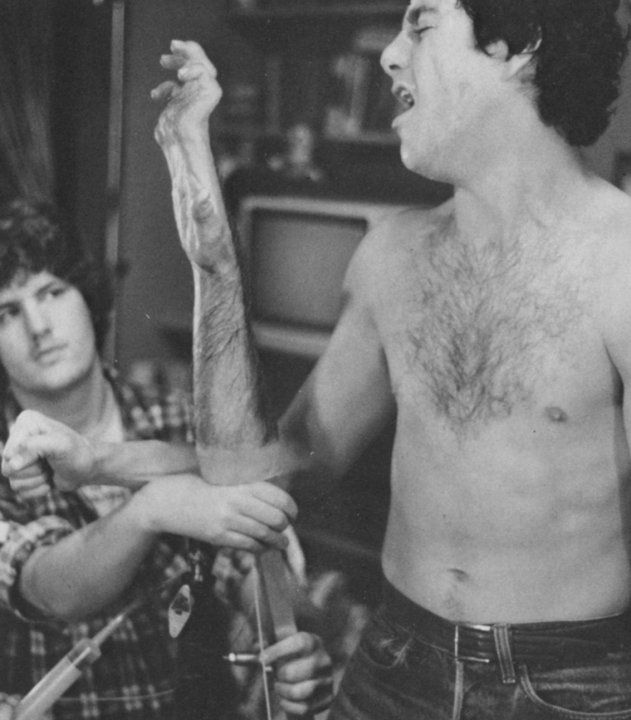 The growing of the hair was shot in reverse as Baker pulled the hair back through a piece of rubber which, when projected in reverse, made it look like it was growing.  Equally rather than build up the chest hair as the sequence progressed it was easier to shoot out of order and the chest hair was reduced down simply by trimming it back.

The pay off to the whole American Werewolf sequence was to be Naughton’s head extending into the wolf’s snout and the first intention was for the head to be shaking back and fore as it did so. The problem with this was that you didn’t see the effect properly hence the static profile shot. This was to be a model head and Baker knew right from the start that he would have trouble making the models eyes look as convincing as Naughton’s were. This was overcome by having the model change-o-heads eyes clenched shut which could be justified by the agony of the transformation. 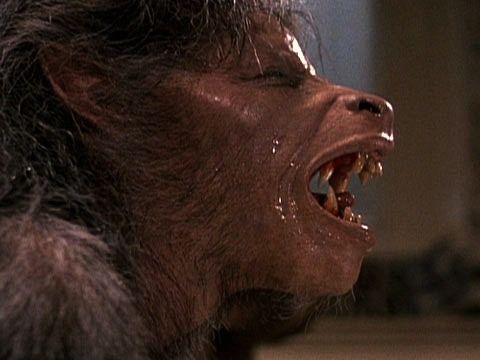 Landis had his American Werewolf and was delighted with what had been achieved and ended up showing much more of the werewolf than in retrospect he wished he’d had. Equally it set a new standard for make up and instigated the Academy Awards to introduce a new category for Best Make Up which Rick Baker obviously won and went on to win a further six times before retiring.