Despite only being 2’8’’ tall actor Verne Troyer was destined for big things. Yet his origins gave no hint as to his future stardom.

Born on January 1st 1969 in Michigan to parents who were both average size he spent his earliest years growing up in the Amish community with his brother and sister. Suffering from cartilage hair hypoplasia meant that though his head would be of normal size he was to have a form of short limbed dwarfism that left him with bow legs, a chest cage deformity and unable to fully extend his elbows.  The Amish treated him like any other person and he helped out feeding the farm yard animals and carrying wood and in keeping with the community his family travelled in a horse and cart only ever being driven in car when he needed to be taken to hospital.

The family eventually left the Amish and Verne Troyer graduated from Centreville High School in 1987. He began work as a telephone customer service assistant but by his mid twenties a friend put him in touch with the makers of the film ‘Baby’s Day Out’ where he was hired as a stand in and stunt double. The stunt work was to continue when he became a star as there was no one that could double for him. He worked as a stuntman in a small number of films including the Schwarzenegger film ‘Jingle all the way’ in 1996. That same year saw him start to get credited acting roles in ‘Men in Black’ and Terry Gilliam’s ‘Fear and Loathing in Las Vegas’.

But it was in 1999 that he won the role that would make Verne Troyer an international star playing Mini-Me in the second Austen Powers film ‘The Spy who shagged me’. Initially his character was killed off at the end but audiences at early test screenings loved him and he was soon to return for the third film in 2002. Unusually the role was mute. That same year would also see him almost die from alcohol poisoning and it was alcoholism that would haunt him for the rest of his life and eventually he checked into rehab in 2017.

The role that made him famous would also be the role that would cast a shadow across the rest of his career and he was forever identified as Mini Me.  It was by far the most successful role Verne Troyer would appear in and he would later appear with Mike Myers again in the critical and commercial disaster that was ‘The Love Guru’ in 2008, a film that would see Myers disappear from lead roles for years. 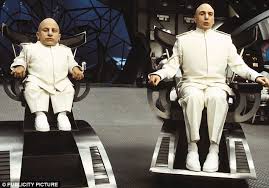 Verne Troyer’s  career would eventually see him reduced to appearing on reality TV shows such as the UK’s ‘Celebrity Big Brother’ as well as pop videos and forgettable TV shows. At the same time his private life was falling apart from alcoholism which exacerbated the bouts of depression he suffered. Yet he remained positive in support of charities and on one occasion when in the UK he heard of a children’s charity where thieves had stolen money and he sent the cause  a cheque for far more than had been stolen.

In 2004 he married but this lasted only a month before it was annulled and from 2007 his partner was actress and producer Brittney Powell.  But scandal followed him when, some years later, the website TMZ would circulate a sex tape of Troyer for which he quickly sued.

At present the cause of death was unknown but early reports suggest that he had contacted emergency services stating that he was suicidal bought on by his battle with alcoholism.

Verne Troyer was 49 years old when he died.