With the release of Colour out of Space it sees South African born director Richard Stanley return to feature film directing after a 24 year period. Albeit he has made a few documentaries in that time and segment of the anthology, ‘The Theatre Bizarre’ but having had success with 1990’s ‘Hardware’ labelled as a bit of a Terminator rip off it was a decent low budget killer robot film and he followed it up with ‘Dust Devil’ two years later a film that was beset with production problems including members of the crew getting lost in the desert location and a studio making their own cut of the film. But it was the infamous shoot for the 1996 version of ‘The Island of Dr Moreau’ that has gone down in cinema history as one of the most chaotic shoots known and was brilliantly retold in ‘Lost Soul’.

Starring Marlon Brando and Val Kilmer it was asking for trouble. Brando was an utter liability and was still getting over the suicide of his daughter but having not learnt his lines was getting them piped into his ear via a radio receiver until the receiver started picking up police messages. Added to this he decided that his character would wear an upturned ice bucket on his head and then painted his face white. Kilmer was an objectionable arse, bullying and obnoxious and deliberately burnt a crew member with a cigarette. The crew allegedly hated him but in fairness during the shoot he found out that he was getting a divorce only when he saw it on a TV news report. Both stars loathed one another and one day both refused to leave their trailers. The extras were hired from a nearby commune of hippies in the jungle who spent their spare time getting wasted on drink, drugs and copious amounts of sex. Brando took a shine to a midget extra (the pair became the idea behind Mini-Me in the Austen Powers films) who then used Brando’s support as an excuse to try it on with the female extras. It was a dream project for Stanley who had worked on it for years. After four days he was fired. Yet rather than slink off he got the make-up department to apply heavy prosthetics and he returned to set unnoticed. The film flopped and Stanley disappeared from film making for the next 24 years. 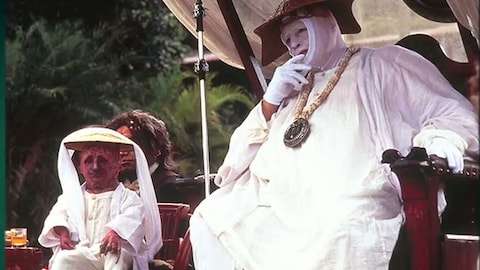 Production company SpectreVision were keen to work with Stanley knowing that he had co-written a screenplay of H. P.  Lovecraft’s book and their commitment to make COLOR OUT OF SPACE with Stanley was solidified in their first meeting.  But before they proceeded, like everyone else before them question on everyone’s mind when pitching the project, and, one day, premiering the film  was – what has Richard Stanley been doing all this time?

When they asked the question, no one could have anticipated Stanley’s response. Without pause, Stanley said, “Well, I’ve been looking for the Holy Grail.” The team laughed. “No, really, what have you been doing?” They asked. To which Richard repeated his answer; “I’ve been looking for the Holy Grail.” That’s when they realized he was serious. Richard went on to explain, in incredible detail, his belief that the Holy Grail was a black stone Aerolite that was the fragment of a meteorite that had slammed into earth many, many, years ago which had potentially been the basis of a number of religions. He then produced from his pocket a pair of black stones that were, in fact, meteorite fragments. To prove his point, he rubbed them together to show how they “bled” when friction was created between the two stones. According to SpectreVision, “…he literally made two dry stones “bleed” in front of my eyes.” It seemed like magic, but Stanley explained that these were merely alien metals that secreted some sort of high-density substance in the iron family. It was not lost on SpectreVision that this was a man who was proposing to make a film about a meteorite slamming into a family farm on planet Earth that brings an almost spiritual like change, for the worse, in this case, to the humans and all life forms that it comes into contact with. And here he was, after all these years, sitting in a café, explaining that the Holy Grail itself may have been a meteorite that changed humanity in so far as it led to the birth of many organized religions that survive to this day. In that moment, Richard Stanley made reality appear just as magical as H.P. Lovecraft’s fiction.

And that’s what Richard Stanley has been doing for the past 24 years?

Read our review of Colour out of Space HERE