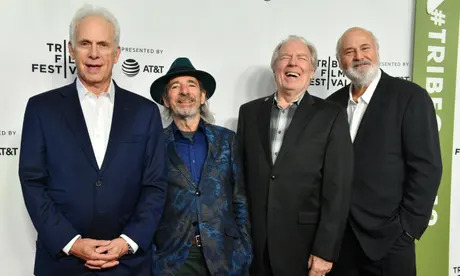 With the news of a sequel about to be made forty years after the original here’s what we know about Spinal Tap 2 as director Rob Reiner is in Cannes to get finance for the sequel. It appears that the original idea came from Reiner, Guest, Shearer and McKean were toying with the idea of a book. “It was going to be an oral history of the band,” says Reiner. “For half we’d be in character, and talk about the band’s lives and how they came together and what they’ve been up to. In the other half we’d be ourselves and talk about the experience of making the film.” But it soon became clear that there was so much material that they could make a sequel and like the original film Spinal Tap 2 will be entirely improvised around a story structure that’s been inspired by Martin Scorsese’s “The Last Waltz,” another rock documentary (that’s not a comedy)  about The Band’s “farewell concert” at Winterland Ballroom. “The idea is that the band hasn’t seen each other for 10 or 15 years and they come back for one more tour and one thing leads to another,” says Reiner

Spinal Tap has been a popular film for bands to watch on tour buses and Reiner is hoping that its popularity will attract current big name stars and singers to appear in Spinal Tap 2. The only person who wont be returning for Spinal Tap 2 is Tony Hendra as the band’s beleaguered manager who died in March 2021 aged 79.