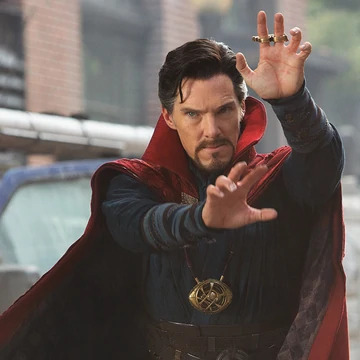 It’s taken six years to get a first sequel to the original Doctor Strange film and in keeping with what is now a well established Marvel tradition of end credit scenes. The mid credit being a pointer to where the franchise will go next and the end credit scene being  a comic throwaway and in that way Doctor Strange in the Multiverse of Madness is no different.

So its that Multiverse of Madness mid credit scene that has Marvel fans talking. With Doctor Strange’s romance coming to an end in the 2016 film the sequel has him still trying to overcome the break up with Dr Palmer especially now she’s getting married and that this sequel makes it clear that they were never going to be together in any of the multiverses. …….but there is going to be another woman in his life as the Multiverse of Madness mid credit sequence shows.

It’s when Doctor Strange is walking down that his name is called out by a white haired, purple jump suited woman who tells him about his incursions into the multiverse has caused chaos and she cuts into another reality revealing the ‘Dark Dimension’ asking him to help her fix it.

Now for the rest of us it’s a case of ‘Wow! That’s Charlize Theron!’ but in the scene her character name is not revealed but the end credits reveal it as Clea and what Marvel fans know is that she has a convoluted backstory with overlord Dormammu and her mother is his sister and that in the comics she has a sort of multiverse type marriage with Doctor Strange.

How much of this will play into the MCU is probably known only to Marvel mastermind Kevin Feige but Charlize Theron is an Oscar wining A-list star with impressive action credentials that include the Fast & Furious films, Atomic Blonde, The Old Guard and Mad Max Fury Road. A supporting actress she is not so it’s likely that she will headline alongside Cumberbatch in the next film.

Future Marvel films are thought to delve far more into the multiverse but whether there will be a big Phase Four team movie of all characters is unknown and Theron is a hugely in demand actress so tying herself up with Marvel might not be on the cards.

Read about how they built the Multiverse of Madness sets HERE