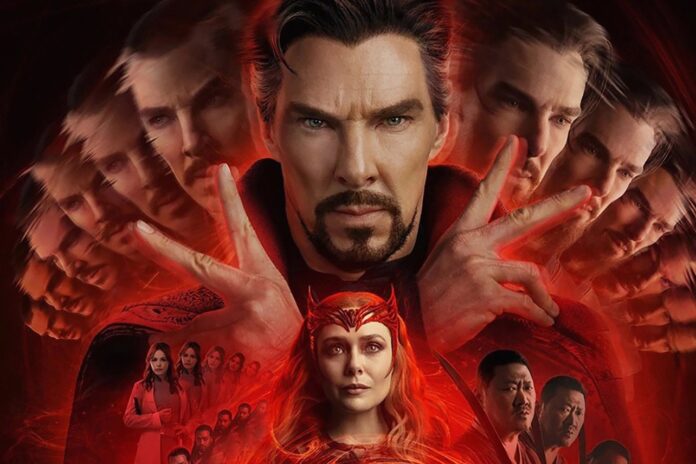 Not the story of Harold Shipman in an antiquated British court system but the latest Marvel blockbuster with Benedict Cumberbatch in the title role. It seems the character has not really been off our screens over the past few years having popped up in the Avengers Endgame and most recently with Spiderman No Way Out where he first got embroiled in the Marvel Multiverse and this first sequel to the original Doctor Strange film that gives him another chance to career headlong through the twisty-turny worlds which is where we first catch up with him alongside America Chavez (Xochiti Gomez) running away from some monstrous entity mangling all in its path as it goes after the pair of them. But is it a dream or a premonition of the future for Doctor Strange?

But the Doctor is still quietly pining for Dr Palmer (Rachel McAdams) a love interest that seems to been lost in the midst of all subsequent Marvel films and here he finds himself a guest at her wedding during which a gargantuan one eyed starfish crashes through the city streets in pursuit of the girl Doctor Strange had been running through space and quickly rushes to her aid. She’s the device that drives the plot – an ability to dream walk through universes with a power she has yet to fully harness but a power that is wanted by a powerful demon. In an effort to protect her he enlists the help of his old Avenger chum Wanda (Elizabeth Olsen) aka Scarlett Witch aka Amanda Holden’s alternate name should she ever play orphan Annie.

Wanda is not without her own issues. Lonely she too pines for love as the mother of two children she has in an alternate universe and America is her key and now Dr Strange finds what he hopes would be a help is now his adversary. It’s only Benedict Wong who returns to the sequel to help him out, (unlike Tilda Swinton who has changed both sex and ethnicity with Chiwetel Ejiofer now playing the role as The Ancient One ), that he can depend on in a series of relentlessly destructive CGI set pieces.

Doctor Strange in the Multiverse of Madness is helmed by Sam Raimi returning  to Marvel after 2007’s Spiderman 3 and brings his customary touches as well as nods to ‘Carrie’ and his own ‘Evil Dead’  films with this being a notably darker and gorier Marvel film with ghostly demonic souls raised from the dead, gouged eyeballs and of course the expected cameo from …well….it’s one of many that will delight fans along with a load of Easter eggs that will go over the head of anyone not well versed in Marvel mythology and there’s a neat sequence as Strange and America plummet through portals as they pass through the Multiverse in its various incarnations that the film makers have a load of fun using dinosaurs and a self-reverential pop art version. But it’s not without its faults. Wanda is reduced to a vengeful harridan of a mother, Wong is there merely to add to the action and Doctor Strange has little character arc in an at times slightly confusing storyline…….oh and as usual there’s the obligatory mid credit sequence and a comic end credit

Here’s a colleague’s and Marvel expert first thoughts just after seeing the film…..