When the synopsis to Willy’s Wonderland states that Nicolas Cage plays a quiet drifter there’s a certain disbelief that this will be the case after the last fifteen years or so of his potty performances but here, a quiet drifter he is, if you can call hurtling around in a sports car, all screeching tyres and screaming engines as quiet. At least that’s what he’s doing until he has a blow out and is towed to the local garage for repairs. However, like every tax averse workman, its cash only and having none on him the mechanic strikes a deal with him. He can have his car repaired and back in the morning on the proviso that he pays a visit to Willy’s Wonderland. Now to us that sounds like an invite to Jimmy Saville’s tracksuit bottoms but here it’s a long closed and semi derelict children’s funhouse where kids can have their birthday parties and be entertained by animatronic clowns and such like. 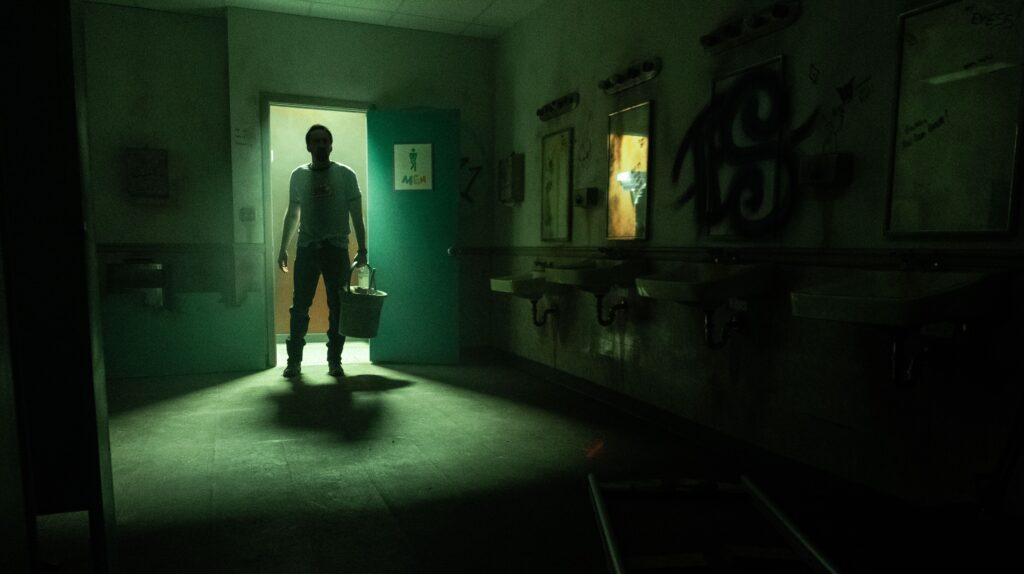 Resigned to working there overnight he’s quickly reduced from a leather clad, shades wearing petrol head to dish mop wielding, bleach squirting skivvy as he sets about cleaning the place, fuelled only by the fizzy drinks he’s bought with him. It’s something of a first too with a montage that, for once, isn’t a hero in training or an armoury of weapons being assembled but Cage tooled up with a bottle of bleach and a scouring pad as he cleans urinals – a bit of a glimpse into his acting future possibly. What he doesn’t know is that the animatronic life sized puppets are demonically possessed and murderous in intent and he soon finds himself their next intended victim.

Into the mix is thrown a group of friends led by Liv (Emily Tosta) and almost immediately you know that these friends aren’t going to see the end of the film with all the standard tropes present and correct even going as far as to include the line, ‘Let’s all split up!’ . Each fit a horror stereotype most notably the slut and the street wise kid whose hair looks like he’s trying to balance a large furry spider on his head. It’s Liv and her friends who know about the horrors within Willy’s Wonderland determine to burn it to the ground until they realize that Cage is inside and they must get him out first before the Puppets of Pain see him off. What could possibly go wrong? 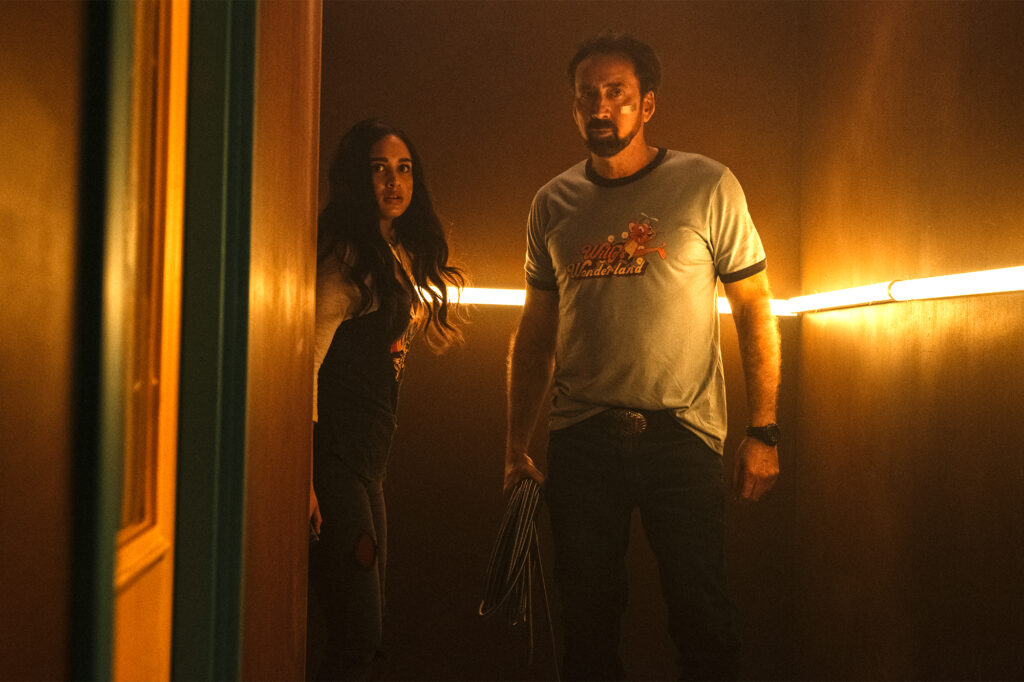 It’s a  back story that reveals Willy’s Wonderland to have been run by a paedophile so it’s ironic that Liv aka Emily Tosta is something of a Megan Markle look-a-like and it makes her anxiety riddled return to the party venue not too dissimilar to a visit to Prince Andrew’s house for his kids birthday. This is director Kevin Lewis first film in 14 years and he is only too aware of the sheer silliness of Willy’s Wonderland setting out its stall early on when Cage has a fist fight with a moth eaten mechanical gorilla. With a disposable cast it’s no surprise that it’s Cage who turns expectations on their head abandoning the usual self indulgent melodramatics that would put a soap opera star in pantomime to shame, he actually remains totally silent without a word making his earnings per word for the film far higher than that which Schwarzenegger was paid for the 16 words he uttered in the first Terminator film.

With the animatronics spurting oil rather than the blood which their victims will soon gush Willy’s Wonderland doesn’t take itself too seriously with some funny moments – a psychotic Mexican puppet with English subtitles is very funny in a film that is deliriously daft!