With Idris Elba (The Dark Tower) recently hinting at being cast as James Bond you know that one thing is for sure – he’s got a new film to promote. This time it’s his feature film directorial debut of the Brock Norman  novel Yardie. Starting in Jamaica 1973 the sunshine serves to shine on the dark underbelly of the island’s criminality with two opposing Yardie gangs in a shoot out that ends with tragic consequences for a child. For young D and his older brother they set up an open air dance hall on neutral ground to try and make piece between King Fox and his opposing gang leader. It a peace that lasts for a few seconds before D’s brother is shot dead. It’s a death he never really recovers form harbouring anger at the person who committed the murder and determines to get revenge. To that end he is taken under the wing of King Fox whose music recordings soon start to branch out into drug dealing.

Much of this first part had D’s voiceover which, though at times it comments on what’s happened, it also somewhat superfluously just reads out what’s already on the screen before disappearing altogether. 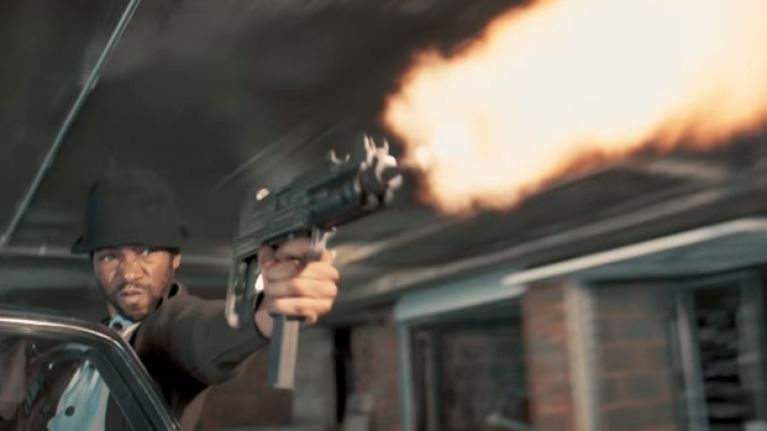 The bulk of the film takes place in London 1983 and much like the earlier part of the film Elba has captured the look and feel of the era extremely well and there’s a real sense of place about Yardie with London as a huge melting pot of cultures. Fox sends D (Aml Ameen) to London where Yvonne (Shantol Jackson) the mother of his daughter now lives and works as a nurse. But rather than being sent there out of compassion it’s because Fox wants a kilo of cocaine delivered to Rico played by Stephen Graham  with an outrageous though wholly convincing  Jamaican patois. Graham is always good in whatever he does but this is a role the like we’ve never seen him in before and is not a million miles away from Gary Oldman’s drug dealing Drexl Spivey in Tarantino’s True Romance  but without the dreadlocks and dodgy eye.

It’s here though that D’s motive’s become unclear and make him less than sympathetic when he decides not to hand over the coke but instead climbs out through the toilet window bringing with him all manner of troubles.

Though this is nowhere near as violent as might be expected in a film about a yardie Elba focuses perhaps more on the music and the dance halls which are brilliantly and convincingly recreated with DJ’s being more sympathetic perhaps because Elba has a second career as one himself.

One of its strengths is the authenticity of its dialogue and patois but that is also perhaps one of its weaknesses too because although it’s not too difficult to follow what’s going on sometimes the accent is so heavy as to be indiscernible. That aside the Yardie cast are uniformly good and Elba shows a sure eye for a culture that is all too rarely seen in mainstream film.