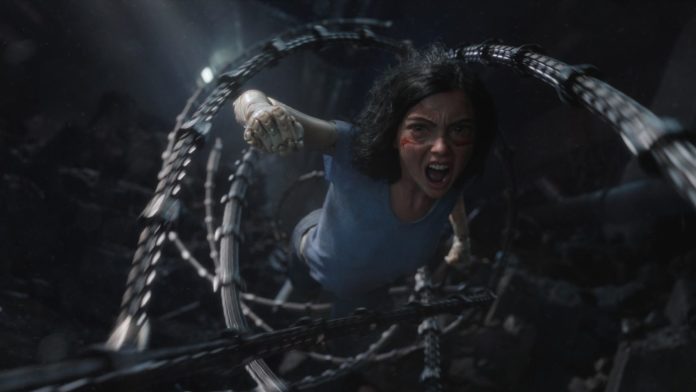 For Robert Rodriguez whose first film El Mariachi cost a meagre $7000 Alita is a monumental step up in terms of budget costing $200m. It’s hardly a surprise though as this was originally intended as James Cameron first post Titanic film that was put on the back burner when the technology had not caught up with his vision.

Based on a series of Manga graphic novels the film sets its period with the 20th Century Fox logo segueing into 26th Century Fox and a giant airborne city dumping a barrage of lo- fi technical waste on the appropriately named Iron City where Christoph Waltz’ Dr Ido is scavenging for spares for his surgery business repairing cyborgs and humans with robotic limbs.

So it’s when he finds the remains of a robot that he rebuilds it naming her Alita (Rosa Salazar) after his late daughter who was murdered in a botched burglary.  Now this being manga means that Alita has those huge eyes that make her look like those Bratz dolls or as we like to call them, ‘slut-barbie’. It’s these huge eyes which some may have a problem with because though it’s all easy enough to get used to for some it will be a distraction.  Cameron’s scripts are not renowned for their literary prowess and this is no different with perhaps only a momentary allusion to existential angst when Alita starts to wonder just who she is when she starts having flashbacks to galactic space battles and suddenly develops an astonishing fighting capability as she demonstrates  a working knowledge of the martial art of the be careful how you pronounce it, Panzer Kunst (which is actually German for armoured art…….nope us neither). It’s this first glimpse at her ability to kick ass that comes when she saves Dr Ido from several  bounty hunter cyborgs in an alley way. It the cyborgs that hunt those who scavage parts from other cyborgs for money and Ed Skrein as Zapan is one of the most murderous cyborg’s in a role that uses only his face of which there are several jokes about his concern for his  good looks.

Added into all of this is Dr Ido’s ex-wife Chiren played by Jennifer Connelly who always looks great and for the dad’s the costume department have dressed her for on scene in what looks like a trolley dash at Agent Provocateur. It’s Chiren who wants to get to the city in the sky and needing the funds has teamed up with Vector (Mahershala Ali in a very different role from Green Book) who, owing to the law of playing villains, wears shades throughout even where he’s indoors . Vector heads up a sport syndicate called motorball a psychotic activity that has players bumping each other off in the name of sport like a murderous version of cage fighting on wheels.

It all boils down to the technology inside Alita thought to now be extinct with Alita eventually on a quest to find out who she is and in the process falling in love with Hugo (Keenan Johnson) though quite whether he will bring in the female audience as DeCaprio did with Titanic remains to be seen.

Based on another source novel Alita has several of Cameron’s trademarks but at its heart is a simple love story with a female lead and a handsome hunk surrounded by absolute state of the art effects in 3D. However as impressive as the effects and 3D undoubtedly is there are no real drop your bacon sandwich moments as seen with all of Cameron’s directed films. Whilst it is exhilarating and exiting and wholly extravagant it’s also the sum of several other films notably Metropolis, Robocop, Blade Runner, Total Recall and especially Rollerball with even an occasional nod to Cameron’s own T2 (one cyborg’s injury heals like the T-1000) and Titanic with a moment between the two lovers which wouldn’t look out of place though won’t elicit the tears that it clearly hopes for.

Alita is ultimately a lesser James Cameron film directed by Robert Rodriguez that looks as impressive as might be expected.