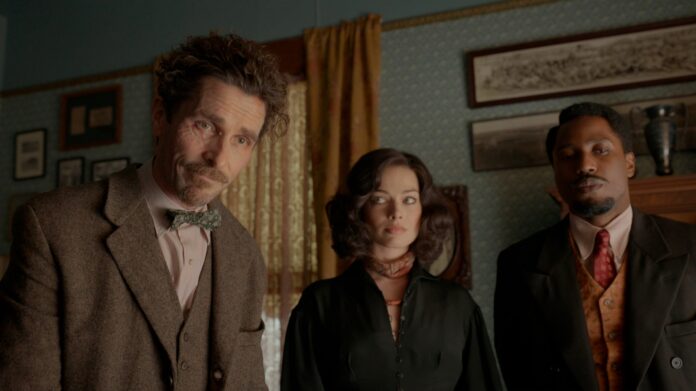 Amsterdam conjures up idyllic images of bicycles, fields of tulips and museums packed with the works of the Dutch masters. But that’s not quite the same for our Editor whose memories of Amsterdam consist almost entirely of unusual tasting brownies, an embarrassing rash and trying to explain to his wife a series of humiliating texts from a post op transsexual he claims never to have met (‘You’re fired!’ – Ed). Director David O Russell’s latest film about the city is equally something of a mixture of mystery purportedly, ‘A lot of this actually happened!’  as the opening titles would have it.

Starting in 1933 it temporarily whips backs to 1918 where Dr Burt Berendsen (Christian Bale) has joined the army who loses an eye in battle but having made friends with fellow veteran Harold Woodman (John David Washington) who himself has trained and qualified as a lawyer. During their wartime army service they had met Valerie Voze (Margot Robbie) a nurse  who had tended to Berendsen when injured saving the shrapnel she recovers from his body and creates her own idiosyncratic works of art. But with the three going on a jolly to Amsterdam (though the majority of the film is set in the US) it is her who vanishes only to reappear in their lives in 1933 when they are back in New York where Berendsen works supplying artificial limbs. All is not well for Berendsen and Woodman when they find themselves framed for murder when a US General’s daughter (Taylor Swift) is killed in a scene that will forever be a meme.

So just up to this point there have already been a number of big names in the film and it continues with Rami Malek as Valerie’s rich brother, Andrea Riseborough as a Bale’s stylish wife, Mike Myers as a MI6 agent but also popping up in a variety of cameos are also Michael Shannon, Anya Taylor Joy, Chris Rock, Timothy Olyphant, Zoe Saldana and most significantly Robert de Niro as a top military General whose help they urgently need. At the centre of this mystery is a plot by rich businessmen to overthrow President Franklin Roosevelt and install their own man, a retired General who they can manipulate for their own nefarious ends.  With De Niro’s highly vocal distaste for Donald Trump it’s easy to see the attraction of the project for him and director Russel has again attracted a hugely impressive cast. A saggy second densely plotted second act slows it down before the sobering facts of the real life story drag the story to its conclusion in a somewhat haphazard fashion. But overall this is an overlong  messy mix of mystery and leaden comedy (the ‘comedy’ of Bale’s false eye popping out never ends and is never funny enough to merit constantly repeating). The intended zany comedy never sits comfortably with the plot perhaps understandably so when the end credits make it factually clear that US fascism is still bubbling away though thankfully being suppressed – just about.

Here’s the stars at the European premiere in London’s Leicester Square…..