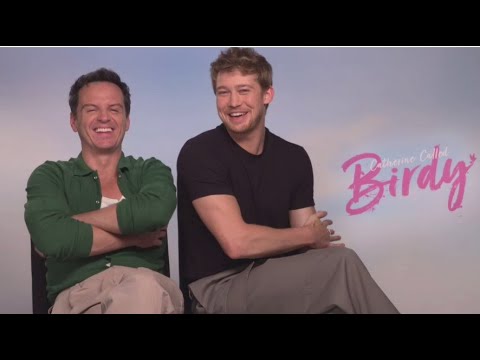 We were lucky enough to chat to Andrew Scott and Joe Alwyn about their new film ‘Catherine called Birdy’ a hugely enjoyable adaptation of the novel of the same name written by Karen Cushman. Starring Bella Ramsey in her first lead role the story follows the 14 year old ‘Birdy’  in medieval England navigating her way through life and avoiding potential suitors her father has in mind is great fun regardless of how old you are. Read our review HERE. There’s a great cast here too that includes Billie Piper, Paul Kaye, Lesley Sharp. Sophie Okonedo, David Bradley and Ralph Ineson too. And if you’re wondering why Catherien is called Birdy….well all is revealed in the film (unless you’ve read the book !)

Both Andrew Scott and Joe Alwyn have appeared in hugely successful blockbusters that have included 1917 as well as Bond film ‘Spectre’ and oscar winner, ‘The Favourite’ and we chatted to them about their mischievous actor, filming in a freezing cold 700 year old castle and Birdy’s belief that ‘Men are horribly duplicitous creatures’!

See what Andrew Scott and Joe Alwyn had to say here…..