When we pitched our script for Ant Man and the Wasp we were forcibly yet politely thrown out of the studios 9th floor window. In retrospect it was most likely to do with the villain in our script being a giant aerosol of insect repellant. Even our rewrite where we replaced our villain with a rolled up newspaper was met with equal derision. Instead the sequel to 2015’s Ant Man is a marked improvement on our own effort.

Paul Rudd (Ideal Home) returns as Scott Lang who now is under house arrest with an over eagar FBI agent keen to catch him out if he should ever leave his home. Separated from his wife who allows his daughter to visit him at home and there’s an utterly charming sequence where the pair crawl through a make shift cardboard tunnel that goes all over the house. It’s everything a Dad should be and is a precursor for how playful and inventive the film is.

Early on there’s a flashback to Michael Douglas inventor Dr Hank and his wife both shrunk to wasp size to save the world from a incoming nuclear missile but in the process Dr Hank loses her in the ‘quantum realm’ leaving her unable to return to normal size. It’s here that she had remained for decades.

His years in the making attempt to rescue her requires a hi tech bit of equipment that Pym needs for a device that he and his giant worker have built in an effort to return his wife to the normal world. He’s not the only one who needs that bit of kit because stealing it off the Wasp (Evangeline Lilly) is Ghost (Hannah John-Kamen) a stroppy teenager who dress likes an albino S&M enthusiast who also needs it to heal her own shape shifting condition but at the risk of Dr Pym’s wife never being able to return to the normal world.

Behind Ghsot is Dr Pym’s old friend and now adversary Dr Bill Foster (Laurence Fishburne) after a falling out from years ago. So, much like the first film the fun here is to do with the immediate size altering status of both Ant man and the Wasp with both able to shrink and run along the blades of knives thrown at the them or Ant man himself able  inflate to giant size.

They’re not the only ones because the inventive fights make use of items as various as salt shakers to Pez sweet dispensers becoming huge accessories to aid the pair as they batter opponents. It’s what sets the film apart from others in the Marvel stable with buildings shrunk to suitcase size and cars like matchboxes in inventive chases. 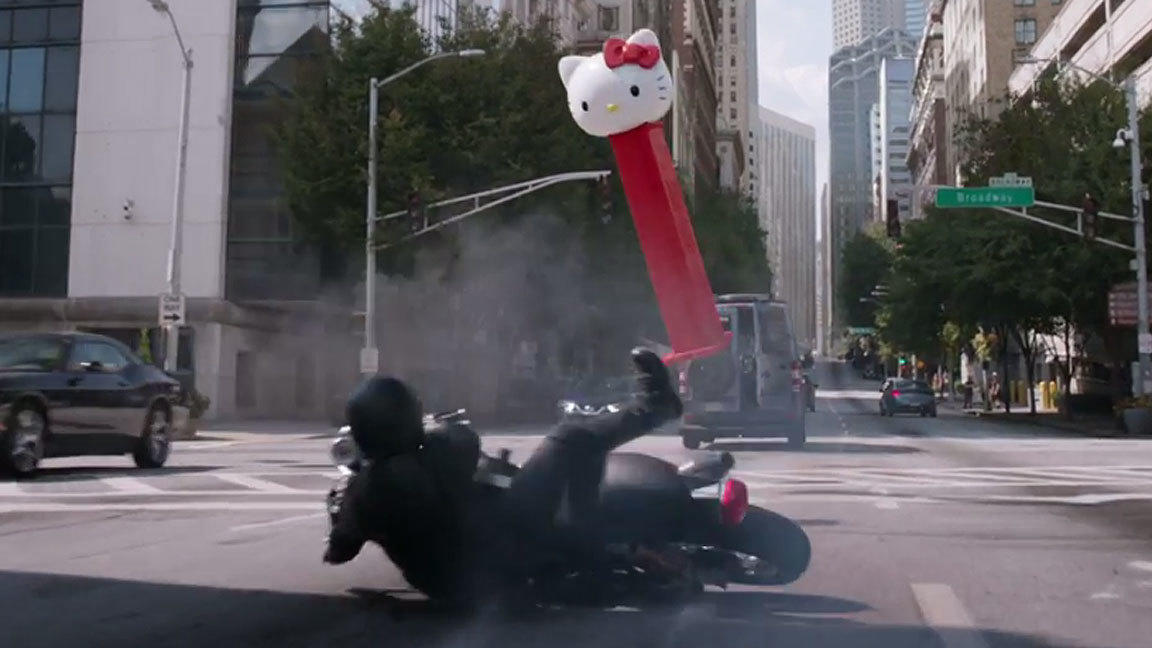 Rudd who has had a hand in writing the script is endearingly amusing with him name dropping his new BFF Captain America as to his new sidekick Wasp  and are reliably supported by Michael Pena and Walter Goggins once again in a bad guy role not dissimilar from his role in Tomb Raider. Whilst Ant Man and the Wasp is still entertaining it’s not quite as good as the first film but there is one moment which does set it apart and that is the mid credit sequence . For once it’s a brief scene which has the whole audience gasp in an unexpected payoff and is worth the wait (although the very very end credit scene is not worth hanging around for).

Here’s the Ant Man and the Wasp trailer…….

Here’s the cast introducing the film at the London premiere…..