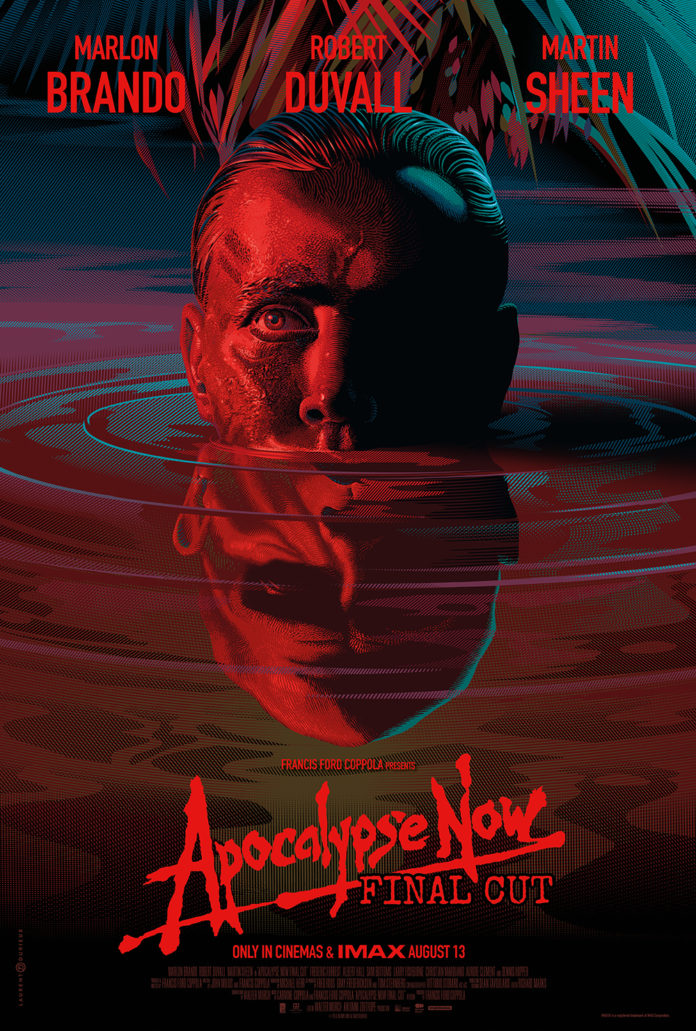 When a director says, ‘My film is not about Vietnam, it IS Vietnam’ it smacks of pretension and a lack of self awareness yet that is what Francis Ford Coppola said about ‘Apocalypse Now’ at the Cannes Film Festival in 1979. However after viewing of whatever version you see, of which this Final Cut follows after Redux and the original theatrical version, he was not far off in his assessment. Apocalypse Now was clearly a huge undertaking and after you watch the documentary ‘Heart of Darkness’ directed by his wife Elinor that you realise that yes, he was right, because the story behind the making of Apocalypse Now Final Cut its a wonder how it ever managed to be filmed being something of a miracle in what was probably one of the most arduous shoots ever. 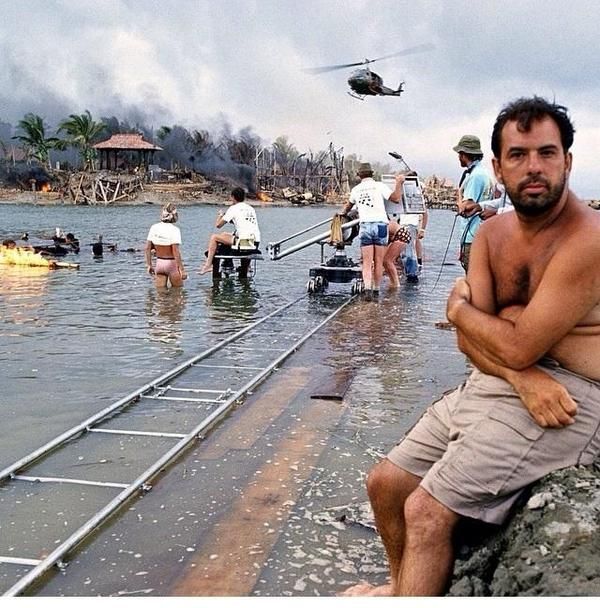 Loosely based on Joseph Conrad’s ‘Nostromo’ , a book that the great British director David Lean was intending to film in his later years, Apocalypse Now follows a US army officer (Martin Sheen) in Vietnam tasked with the mission to ‘terminate with extreme prejudice’  Special Forces Colonel Kurtz (Marlon Brando) who has gone rogue amongst the natives where he regards himself as a god.

It was a project that Coppola had wanted to film way back in the late 60’s but the Vietnam war was a highly contentious issue and none of the studios wanted to touch the script that he and John Milius had written. So with the script left in his bottom drawer he went on to make a few other films. Fortunately those films turned out to be The Godfather , The Godfather 2 and The Conversation. The first film won him a Best Screenplay Oscar, the second film won him a Best Director and Best Film Oscar and the last film earned him further nominations. With critical kudos and millions in his account the time was right to get Apocalypse Now made. It was to be his biggest budgeted film to date and it almost broke him.

Locating to the Philippines, as it looked most like Vietnam, the country was also providing him with a load of military vehicles supplied by General Marcos (his wife is the one with the infamous shoe fetish). With Harvey Keitel in the lead role production began of what would end up to be a massive and unintended 238 day shoot.  One of the many quotable lines from the film is Marlon Brando’s, ‘The Horror….the horror’  and it proved remarkably apt. The first of the horrors was the decision after a few weeks of filming to recast Keitel for Martin Sheen and consequently having to reshoot all the scenes again. It was the first of a catalogue of mishaps, errors, and incidents beyond the productions control. After this it only got worse – Sheen suffered a massive heart attack, the military aircraft would be diverted midway through scenes to fight the Communists in another part of the country, Brando having taken a $1m up front for the role decided to pull out and not return the money before changing his mind and then turning up overweight and totally unprepared demanding lengthy discussions with Coppola for days without anything being shot. Over schedule Coppola remortgaged his house, his vineyard and emptied his own bank account to get the film completed. It’s no wonder that Coppola was on the brink of suicide.

Filming having started in 1976 then took a couple of years to edit before the film was ready to be released yet, still unfinished, it was entered into competition in Cannes. When it was finally ready it was by anyone’s standards an incredible experience. Apocalypse Now Final Cut has so many astonishing moments, scenes and dialogue that it pretty much became the definitive Vietnam film. From the village attack by helicopter as March of the Valkyries blares out, the real life village slaughter of the bull, the napalm decimation of the jungle to the tune of The Doors ‘This is the End’, Sheen’s head resurfacing from below a pool of water, Brando’s Colonel Kurtz emerging from the shadows,  the imagery is rich. 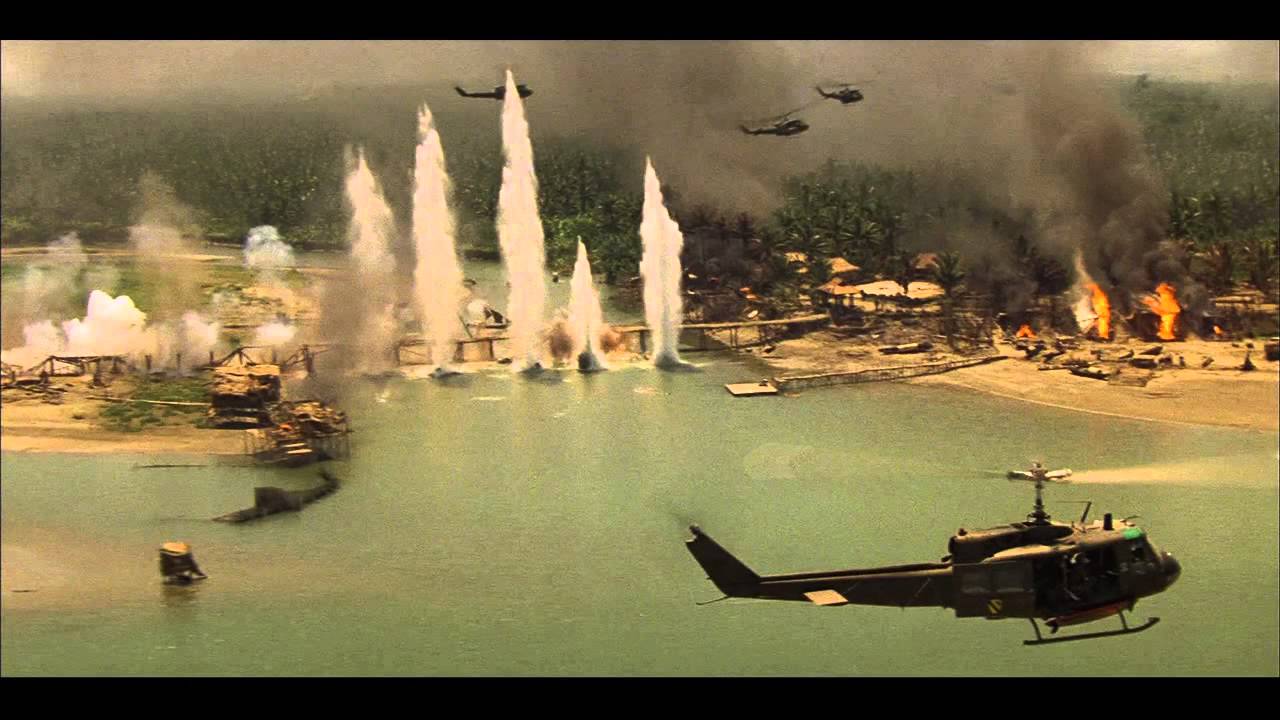 Added to this are many of the performances of which Brando’s towers over the film but it’s Robert Duvall’s bomb happy Lieutenant uttering the film’s most famous line, “I love the smell of napalm in the morning!’ that vies with Brando’s ‘ The Horror….the horror’. But  Apocalypse Now Final Cut had a number of other great performances that includes a 14 year old Laurence Fishburne , a manic Dennis Hopper, a coolly calm pre-Star Wars Harrison Ford and even Coppola himself has a fleeting cameo amongst  the explosive battle scenes as a news crew director. The film was a monumental achievement winning Coppola the Palme D’or even though the film had not been completed when it was shown. It put him in that most rare of categories  – directors who had won the Palme D’or twice (having already won for The Conversation in 1974). It was the first of a glut of awards and nominations the film would eventually earn culminating in another Oscar win for Best Cinematography and  Best Sound and earning nominations for Best Film , Best Director, Best Screenplay, Best Art Direction and Best Editing as well as one for Duvall as Best Supporting Actor. 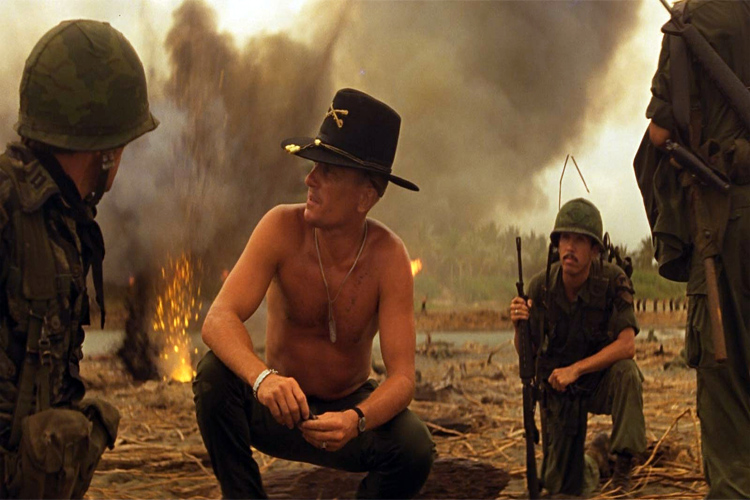 The 1970’s had been a brilliantly creative decade for Coppola and Apocalypse Now Final Cut was arguably his last truly great film of both his career and the 1970’s – with perhaps only The Godfather 3 and Dracula the only films to get anywhere near his artistic peak. By any stretch of the imagination Apocalypse Now Final Cut qualifies as one of those films you must see at least once in your lifetime. Now forty years later Coppola has assembled probably the definitive Home Entertainment release that sets the benchmark for other classic films. In an extensive four disc blu-ray  collection just about every facet of the film is covered. Startng with a specially filmed introduction by Coppola’s followed by the film itself with an optional directors commentary. Further discs have interviews with co writer John Milius plus a huge array of featurettes about the filming including lost and additional scenes, the editing of the films one million feet of footage, the sound design plus a load of other featurettes going into remarkable detail. One of the highlights is Heart of Darkness possibly one of the greatest ever documentary’s about the making of a film. There’s also a Q&A between Coppola and  Steven Soderburgh as well as unseen footage, and an intriguing featurette about the history of the films various versions on Home video as well as a storyboard collection, a huge photo archive plus all the trailers, posters, radio spots and press kit photos. But this only scrapes the surface of just how much there is on the discs

Apocalypse Now Final Cut has taken 11 months to clean and restore the films 300,172 frames resulting in a superb transfer with a brilliant Dolby Atmos soundtrack ideal if you have a home cinema sound system and this 40th anniversary release is how landmark films should be treated for Home Entertainment release.