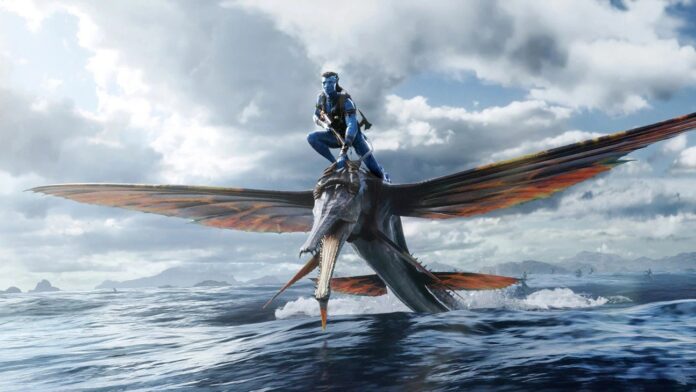 When you’ve written and directed the biggest box office earner of all time then the studio are going to want a sequel and Avatar The Way of water is the first of four intended sequels that James Cameron has lined up (the third film is already shot and is in post-production for a Christmas 2024 release). So after the events of the first film Jake (Sam Worthington) is now a Naa’vi, the nine foot humanoid creatures that live on Pandora. Having found love with Neytiri (Zoe Saldana) they have a family of four children two of which are a kind of hybrid with the giveaway being that they have four fingers rather than the pure Naa-vi having three.

Their idyllic life as forest people at one with nature is soon endangered with Jake’s former military boss Quaritch (Stephen Lang) himself now in Naa’vi form and hell bent on revenge leading an elite team of his soldiers to hunt down Jake regarding him as a traitor responsible for wiping out half his troops at the end of the first film. The family flee for safety finding it amongst the reef people, sea dwelling Naa’vi with a turquoise hued skin. And whereas Jake’s forest dwellers have the flying creatures of the sky the reef people have the sea creatures as theirs. So whilst Quaritch and his troops embark on a hunt for Jake we have a second act where Cameron exercises his green credentials as the new family on the reef learn to work with the creatures of the sea befriending an enormous whale like creature in a plot point taken directly from the Lion with a thorn in his paw children’s tale. And whilst the two tribes of Naav’vi form friendships and develop their ocean skills it’s all building up to the inevitable mano–a-Naavi between Jake and Quaritich.

Like so many films Avatar The Way of Water has been a long time coming – thirteen years in all – and James Cameron’s sensibilities have tempered over the years and appears to have become more mellow than the stories of his demand on set manner has suggested. In the past ten years he has become vegan, pushed for sustainable energy use solutions, has developed technology to explore marine life and oceans and now lives in New Zealand with his wife and five children and those interests are increasingly at the fore in this first sequel.  As might be expected with the directors oeuvre the advance on technology is on point and with the second act being marine based the water scenes especially those underwater are astonishing with a clarity of picture that is superbly realized. His scripts have always had strong central female characters and though its Jake that’s front and centre Neytiri is fiercely protective of her children and the bond between parent and child is something that Cameron has developed with strong emotional bonds between the on screen family and may well be a reflection of his contentment in his own life having been married for twenty years with his fifth wife. And it’s his own interest in conservation is reflected in several key moments – the barbaric techniques used to hunt Pandora’s whales by a particularly callous Australian ship’s captain is clearly a criticism of the few countries that still carry on the practice and the casual despatch of a sea animal by one of the military is a critique by a director with an avowed love of animals.

Why Terminator 3 is better than you think

But Avatar The Way of Water is not without its issues. The 3D is as state of the art as might be expected but here it adds little, something that so many of the subsequent films also stumbled with after jumping on the 3D band wagon. The majority of the film is that of Pandora and the Naa’vi and despite the leaps in technology there is a feeling that this all looks similar to a PS5 game with the animated sequences between the game play so it is refreshing when there are scenes with humans and Sigourney Weaver puts in a fleeting appearance and perhaps the most sympathetic is Jermain Clement as a scientific engineer with a disdain for the whaling ship captain and though Kate Winslet is the cast reuniting with the director after Titanic she is unrecognisable as a Naa-vi and whereas in the first film where the film flipped back and fore between the real life actor and their alien avatar means there’s a slight disconnect here. Added to this is Cameron’s usual script template for his epics where the second act adds to an overlong film where relationships are developed, we see the Naa’vi commune with nature and plot points are set up that will pay off in the third act and there’s an occasional voiceover that is superfluous with Jake explaining emotions on screen rather than commenting about the onscreen action (it’s probably Goodfellas that is one of the best exponents of this over the past thirty years). James Cameron has lost none of his ability for scale and spectacle and Its that third act that fans of the director will likely enjoy most as the director has lost none of his ability to orchestrate carnage on a grand scale.

Watch the Avatar The Way of Water trailers HERE