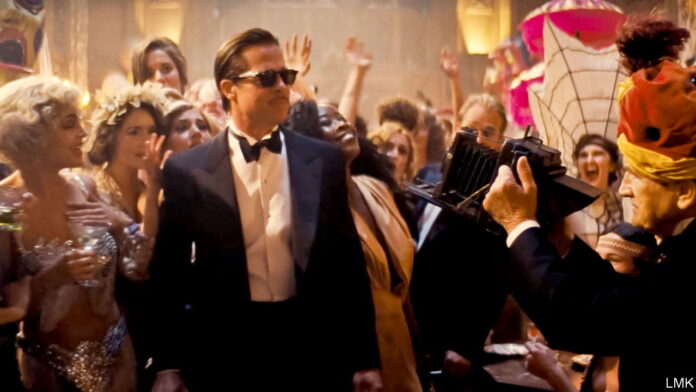 With a Best Director Oscar for only his second feature film, ‘La la Land’ Damien Chazelle returns to a far more decadent and darker era in Hollywood history hence the Babylon of the title. Right from the start he sets out just how depraved early Hollywood was with a debauched party at the home of a studio boss which Manny Torres (Diego Calva), eager to break into the movie business, delivers an elephant that lumbers around the superstar party like Alison Hammond gate crashing a BAFTA awards do. But Manny also helps Nellie LaRoy (Margot Robbie) an aspiring starlet, crash the party, literally, driving her car into a statue outside the house before gaining access to the shenanigans inside. Behaving outlandishly she catches the eye of the execs and when tragedy strikes an actress at the party Nellie unwittingly but delightedly finds herself filling the actresses role in a silent film.

Margot Robbie at the European premiere of, ‘Amsterdam’

Also at the party is Jack Conrad (Brad Pitt) a silent movie star changing wives as frequently as his underwear but whose career is about to take a downturn with the advent of the talkies. In that respect Babylon takes several nods to the classic musical, ‘Singin in the Rain’, overly so by the end. Though Pitt and Robbie are the stars of the film the narrative also ties in several notable supports – Elinor St John (Jean Smart) a well connected gossip columnist taking notes from the side lines and Sidney Palmer (Jovan Adepo) an African American trumpeter signed up by the studio only to be humiliated in a ‘blackface’ scene. There’s also a tremendous turn from Tobey McGuire as a sleazy gangster who takes Manny down a dark and increasingly unsavoury rabbit hole like some tinsel town version of Dante’s inferno. It’s a sequence that wouldn’t be amiss in a David Lynch film and Chazelle also draws influence very obviously from Baz Luhrmann, no bad thing in itself, with several of the party scenes a whirling dervish of devilry set to music and owes much to editor Tom Cross and is in keeping with the tone of Hollywood hedonism.

Why did this actor do ‘blackface’?

Pitt and Robbie are excellent in their respective roles, Robbie especially as the rising starlet from the street who can’t leave that behaviour behind even at the expense of irreparably damaging her career. Likewise Jack who, though a star of the silent screen, soon finds that he can’t keep up with the talkies. For both of them the system will chew them up and spit them out without a moments thought and little seems to have changed even today in a notoriously fickle industry.

Chazelle has certainly done his research into old time Hollywood decadence with nods to various notorious incidents the most obvious being the infamous Fatty Arbuckle party rape that finished his career (although he was later acquitted). Running at three hours this is epic storytelling and there are a number of brilliant extended sequences featuring several characters that build to climactic moments making this is arguably Chazelle’s best film to date.