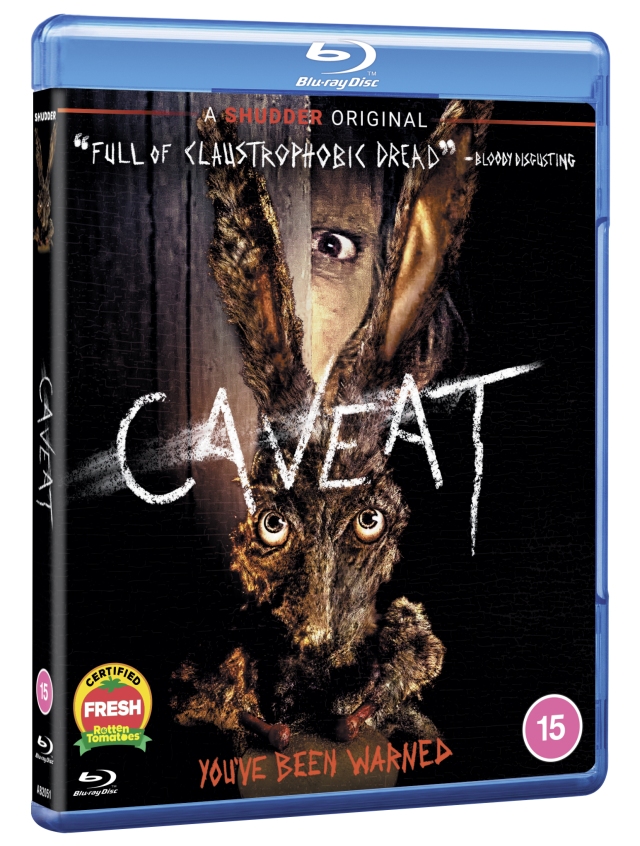 Whereas Blumhouse has established themselves for theatrical horror releases it is streaming channel Shudder that are making inroads into the genre with a variety of films within the genre and their latest, Caveat, is one of their better offerings to date

Amnesiac drifter Isaac (Jonathan French) struggles to recall his recent past after a traumatic event, but shifty ‘friend’ Barret (Ben Caplan– Murder on the Orient Express) offers to help him back on his feet with a profitable babysitting job. All he has to do is look after his adult niece (Leila Sykes). That Isaac doesn’t pick up on this sounding a bit odd should surely be a pointer that he needs further medical help. And let’s be fair all of us who have suffered at the hands of landlords when we were students know they can’t be trusted which is exactly the case here when Isaac is taken to the isolated house which is plagued by a gruesome past which has left Olga psychologically disturbed with her spending her head in her hands in much the same way as the Queen must do whenever Andrew says he’d like to clear his name and do another TV interview. Arriving at the house Isaac finds out the £200 a day he’s too earn has a caveat when Barret tells him that he must wear a leather harness and chain restricting his movement to certain rooms in much the same that the Queen now keeps an eye on Andrew that alarm bells must surely be ringing in Isaac’s head. Once in the harness and left alone with Olga, a terrifying game of cat and mouse ensues, and Isaac must fight for survival amid the unsettling resurgence of his own memories.

Caveat is written and directed by Damian McCarthy in his feature film debut and has embraced the low budget and at times has captured some highly unnerving scenes shot in a deliberately low key manner that heightens the creepiness of what’s hidden in the house. Running at a brief 88 minutes there’s enough here to keep you on edge with enough of a mystery to keep you guessing as to what happened in the house and how.  In turn creepy and compelling there’s enough to keep you hooked to the end which for some may not quite be the climax hoped for but McCarthy is a director to keep an eye on with this promising much for horror fans if he stays in the genre.

The Caveat blu-ray has a limited selection of bonus features including both a directors and producer’s commentary both of which have some very good moments and insights into the problems of shooting on a shoestring and how they were overcome and the disc also has a storyboards comparison. Caveat promises much and delivers several extremely effective goose bump inducing scares that will please fans of the genre

Caveat is released on blu-ray on 21st February 2022