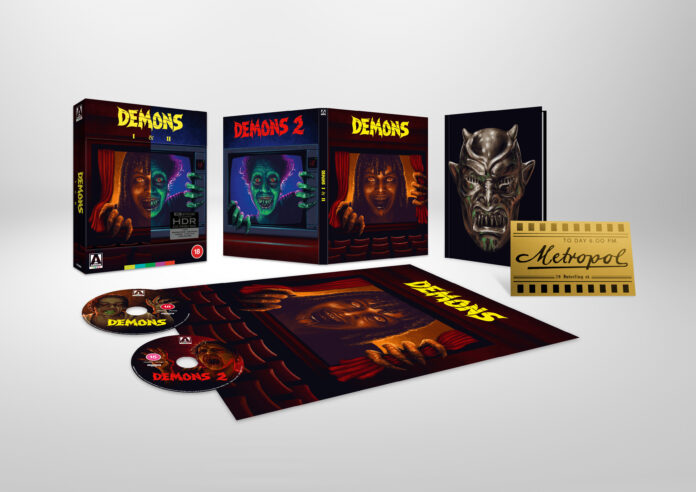 Writer, director, producer – Dario Argento wore many hats……which is just as well as he sports one of the worst haircuts ever seen for such an integral figure to the horror genre. Producing was an area that by the time of 1985’s Demons he only tentatively had moved  into perhaps most importantly with Dawn of the Dead, a movie that Argento produced because having he wanted to see a sequel to Romero’s original zombie classic Night of the Living Dead.  But Argento was something of a self publicist having established himself as a highly influential director of Italian horror and heightening his profile with an early 70’s TV series.

By 1985 he began to branch out in earnest into producing nurturing talent but still with his flair for the macabre indelibly stamped on his protégés work.  Demons was one such film. Directed by Lamberto Bava, son of Mario another influential Italian horror director, the film was co-written by Argento and featured a random group of people who are invited to the screening of a film by a man with half his face covered in silver foil like some Poundland Terminator handing out flyers.  It’s Cheryl (Natasha Hovey) who accepts the invite and takes one of her friends along to join an eclectic mix of cinema goers that includes an aggressive Mr Lover Man stereotype with two girlfriends, a pair of frat boys and a young woman who bizarrely takes her blind father to see, or more rightly, hear the film. But the movie they go to see reflects what is about to happen when one of the audience members becomes possessed having cut themselves when wearing a mask they find on display in the foyer. Let the carnage commence as the audience find themselves trapped in the cinema with rabid demons! 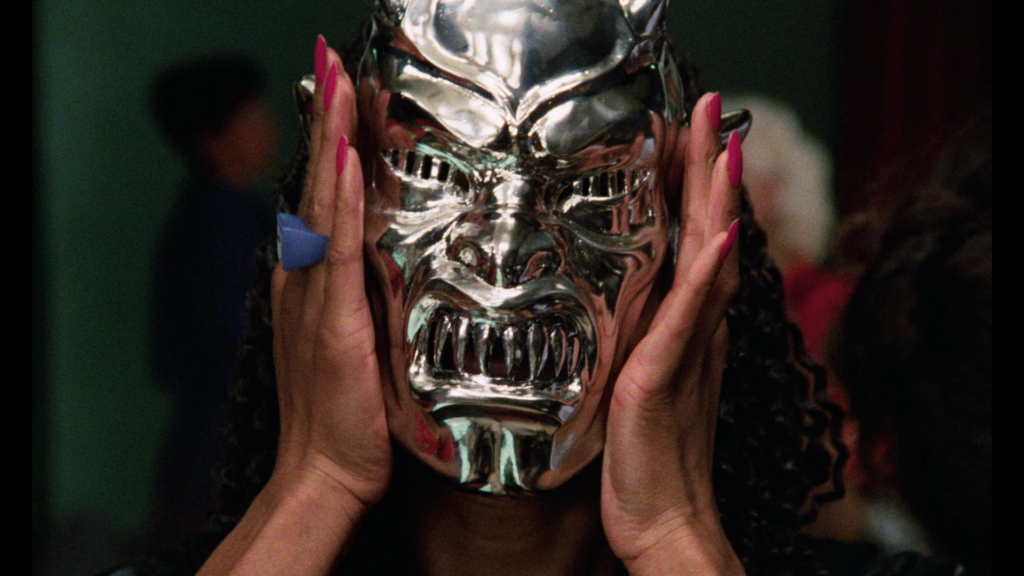 It’s a hokey set up with the audience members merely being fodder to be despatched in an inventively grisly manner  care of the effects team.  As a horror premise it’s an ideal set up and is effectively a showcase for make- up effects though it’s important to remember that this was four years after Rick Baker’s ground breaking and Oscar winning effects in An American Werewolf in London and here the Demons, rather than bleed red blood, seem to leak green gunge like they’ve been vacationing at Chernobyl. 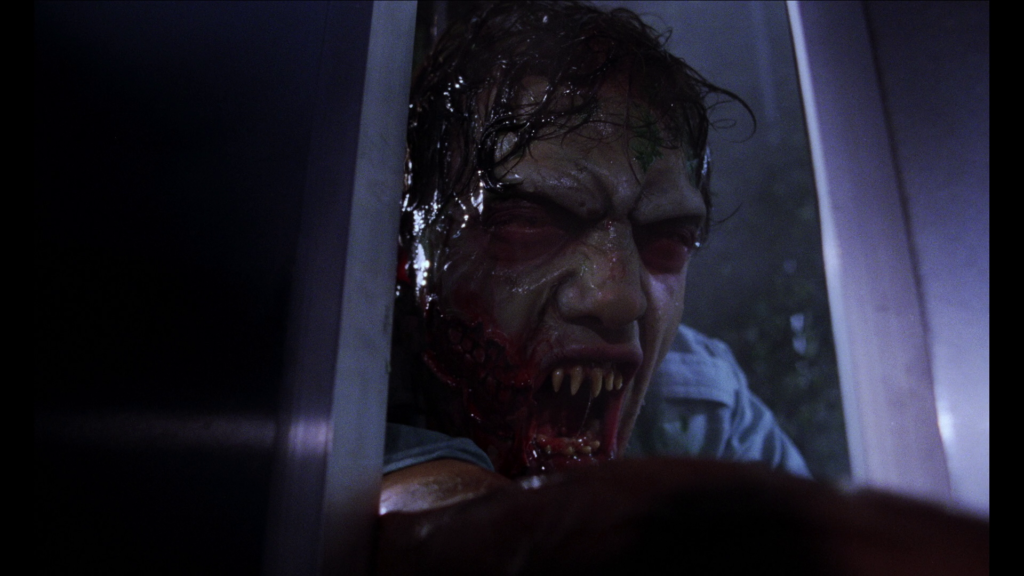 Argento had promoted many of his usual team to more senior roles on Demons and though he was hands off letting Bava go his own way though Argento’s name headlines above the films title in the poster and goes as far as even having posters for his own films in the cinema foyer. But Demons was far more commercial than Argento’s own catalogue and the film was a hit with Demons 2 quickly following the next year with the carnage this time transferred to a high rise block of flats. 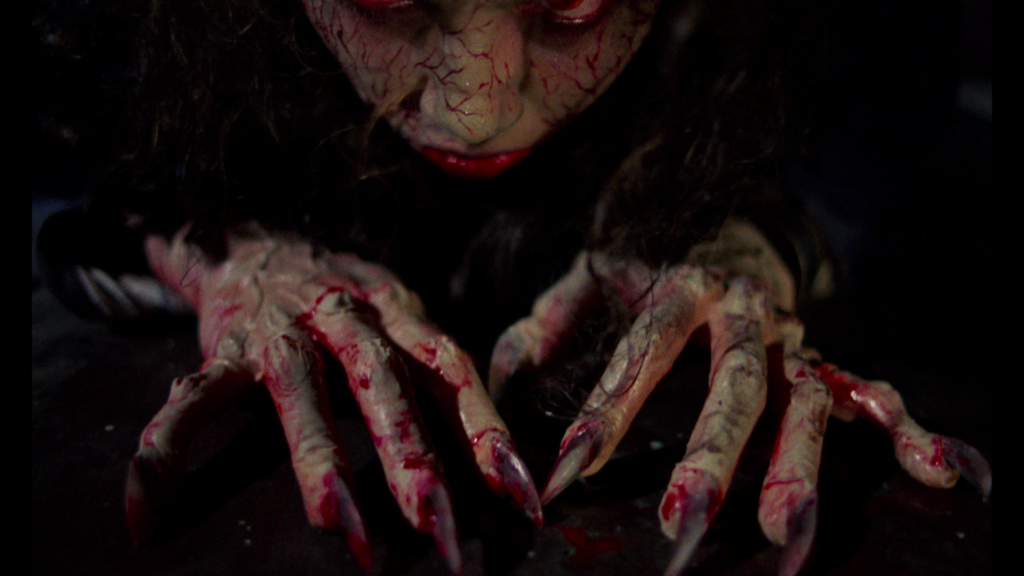 Demons and Demons 2 is now released on blu-ray in a brand new 4K restoration with a load of new bonus features alongside some archive featurettes from previous versions of the discs.  Demons has two versions of the film: the full-length original cut in Italian and English, and the slightly trimmed US cut, featuring alternate dubbing and sound effects – we stuck with our preferred Italian version. There is also several commentary – the first by a pair who do some sort of podcast but far better is a new director’s commentary by Bava along with his make-up effects artist Sergio Stivaletti . There’s an equally good archive commentary too with both and joined by composer Claudio Simonetti and actress Geretta Geretta.  There’s also a very good video essay on Argento’s career as a producer as well as an archival interview with him. Less successful is the archive featurette interview with Simonetti – no real explanation as to why some of the pop stars of the day are on the soundtrack and its bizarre watching a group of thuggish punks driving around listening to 80’s pop duo, Go West! There is of course the usual trailer which have a novelty value as the art of cutting a trailer has advanced in leaps and bounds over the years. 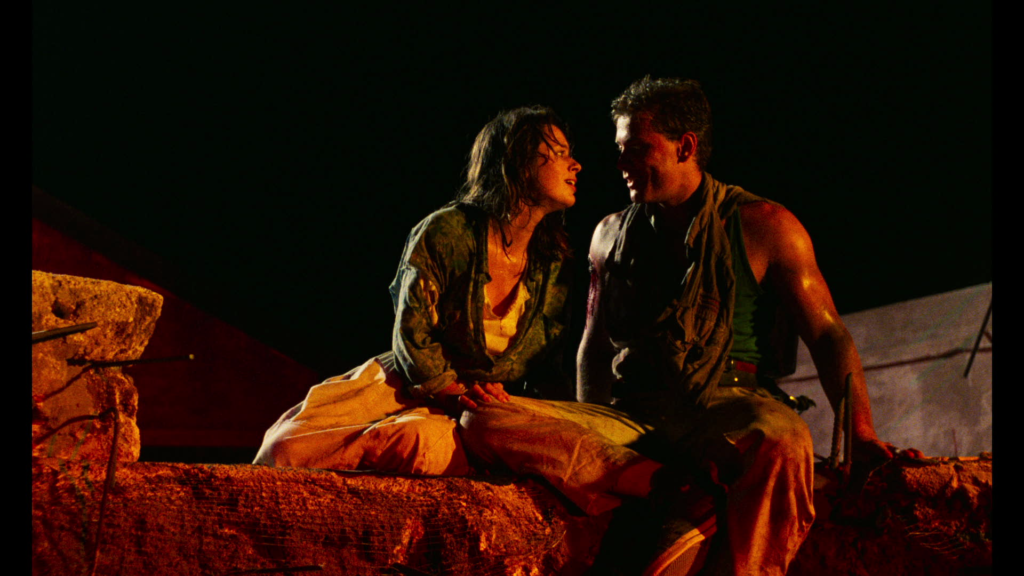 The Demons 2 disc has a commentary by critic Travis Crawford and a second archive commentary with Bava  & Stivaletti which has a fair bit of anecdotal background to the mayhem on screen for a sequel.  There’s a very good archival interview with Stivaletti about the creature carnage he created and a History of Italian Horror is very good for those wanting to expand their knowledge of a country that bought so much, often controversially, to the genre. Far less successful is a somewhat pretentious video essay about the space and technology in the film which seems to be read out with all the enthusiasm of someone reading out their own death warrant.

For Italian horror completists this is a must buy and for those new to the genre the films are entertainingly camp, if gory, introduction to Italian horror.