Formerly Michael Bassett the director is now known as MJ Bassett since identifying as transgender and some may draw their own conclusion in the title of latest film, Endangered Species, which MJ directs and co-wrote with his daughter Isabel wrote. Shot In Kenya the story centres on Jack Halsey an employee at an oil exploration company who takes his wife Lauren (Rebecca Romijn) and his step children Noah (Michael Johnston) and Zoe (Isabell Bassett) on a dream safari holiday. As if Jack isn’t uptight enough as he tries to conceal his own secret from his wife he also has to contend with the antagonistic Zoe bringing her boyfriend Billy along, an irritating bohemian soap dodger type and into the mix is also thrown the recent revelation that his son is gay. Things go awry when Jack has taken financial shortcuts and the intended safari is impacted when they have to take their battered rented camper van out on their own into the wilderness park. 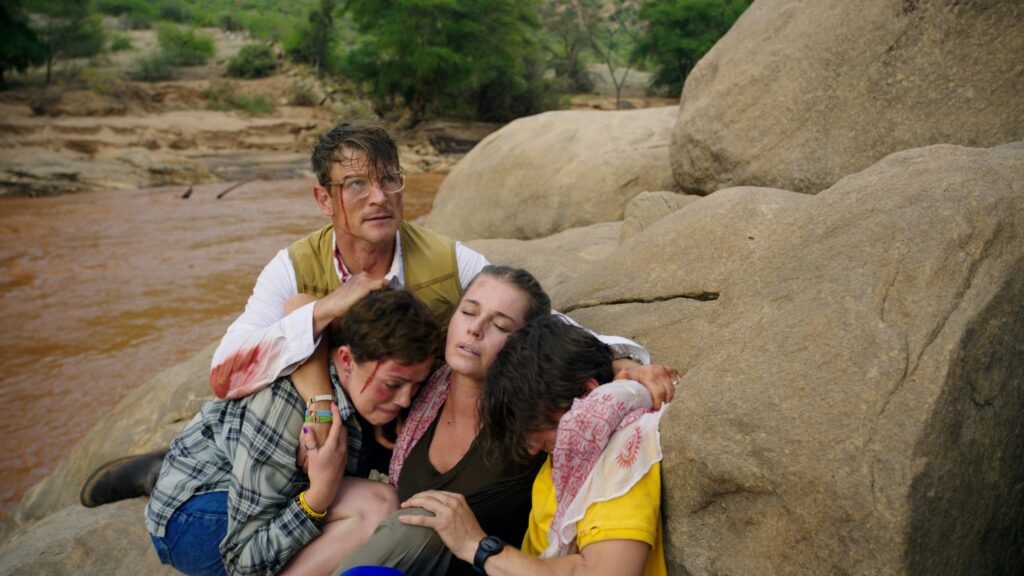 What could possibly go wrong? Well as this is a survival film the answer is everything, starting with a rhino flipping the van over leaving Jack with a badly injured leg and a pack of ravenous hyenas lurking nearby as well as a gang of poachers led by Jerry O’Connell, only too keen to cover up their own illegal activities. The family unit, already at breaking point, soon starts to disintegrate with audiences left to guess who if anyone will survive and how. It’s only too obvious who the endangered species really is.

Shot in a Kenyan National Park over the course of just 18 days it’s not without its issues – the mobile phone not working in an emergency inevitably crops up, Romijin, whose character is a nurse and presumably has been struck off if her first aid is anything to by here and the CGI animals look like…well….CGI animals. The disc has a decent array of extras that includes interview with all the main stars with some interesting anecdotes although in an age of #MeToo it is somewhat alarming to hear Jerry O’Connell advise that anyone wanting to appear in an MJ Bassett film will need to wear knee pads. Mercifully he goes on to explain that it’s due to all the action scenes.  MJ himself provides two commentaries – one solo and one being with actor Jerry O’Connell.

Endangered Species is an enjoyable enough B-movie in an exotic location and Bassett keeps things moving along leaving you to guess who will become a lion’s safari snack.