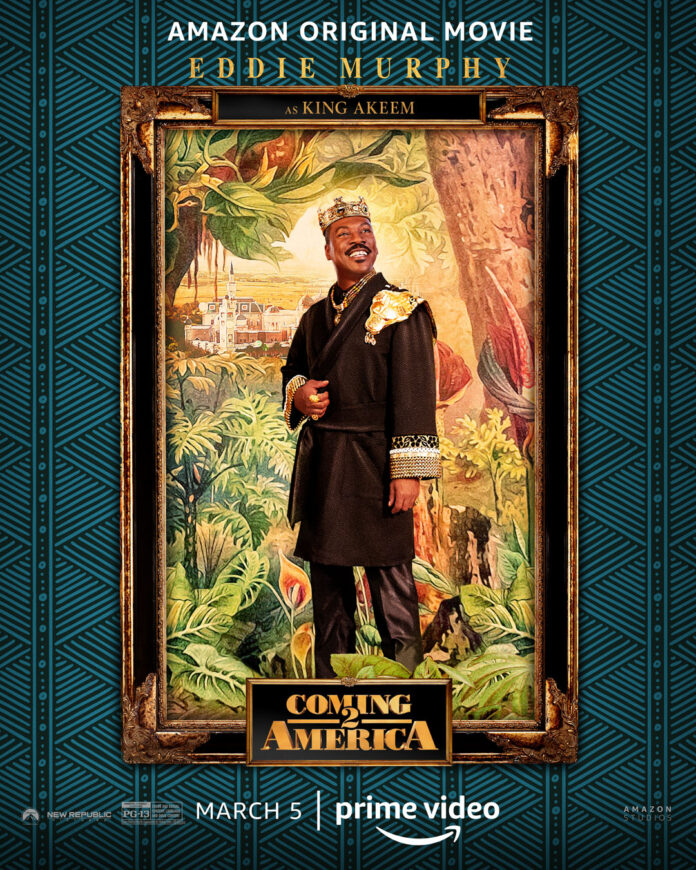 The journey to bringing COMING 2 AMERICA (read our review HERE) to fruition began with a phone call from Murphy to screenwriter Barry W. Blaustein, who, along with his writing partner, David Sheffield, has collaborated with the actor since his early days on Saturday Night Live. In addition to COMING TO AMERICA, on which they served as co-producers, the duo also penned screenplays for Murphy’s box-office hits including BOOMERANG, THE NUTTY PROFESSOR and THE NUTTY PROFESSOR II: THE KLUMPS. For COMING 2 AMERICA, Murphy created the characters, while Blaustein and Sheffield crafted the story and co-wrote the screenplay with Kenya Barris 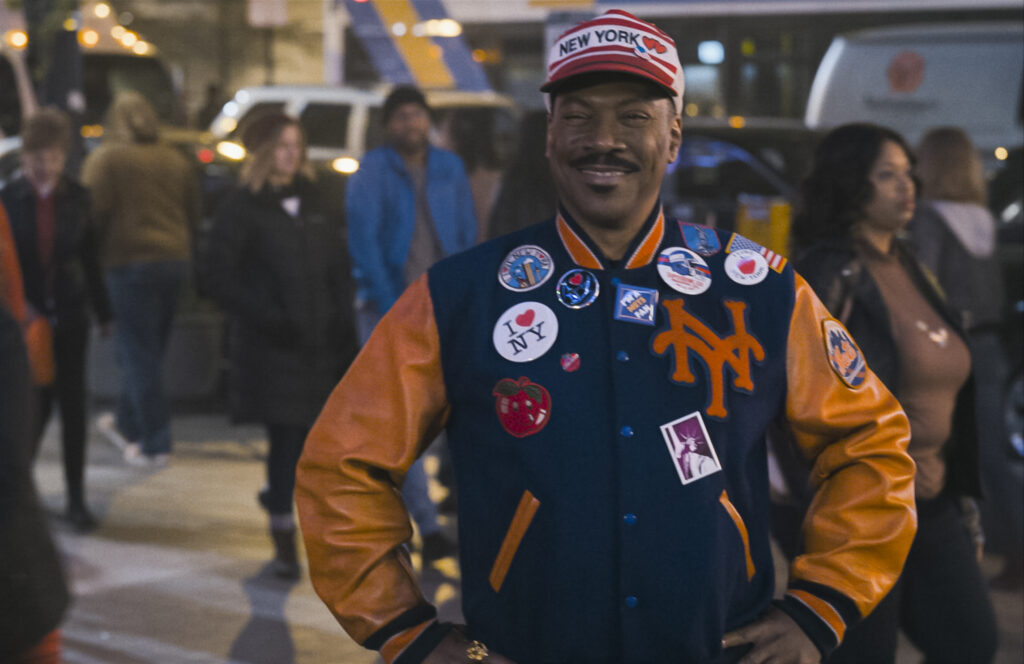 “I got a call from Eddie, out of nowhere, and he said, ‘I think I have a way of doing the sequel,’” remembers Blaustein. “After he gave me a brief synopsis of the idea, I was interested, and he said, ‘I want you and David to write it.’” That was four years ago. David Sheffield remembers their initial conversations with Eddie Murphy, about shaping the story. “Early on, we talked about how everyone would want to see what’s going on with Akeem and Lisa and we decided that they should be happily married, and we gave them three daughters. We also planted the seeds about there being a feminist statement with the oldest daughter assuming her rightful place and Kenya Barris took that and ran with it. He did such a great job and we’re honored to share a credit with him.”

The goal was to expand the story but also bring back as much of the original cast as possible. “For Eddie and Arsenio, I think the film just builds off of the friendship they’ve had forever. It was also fun trying to figure out how to put all the different characters back in there and we tried to include everybody. If you were in the original movie for five seconds, we thought, ‘We’ll try to get you in there,’” laughs Blaustein 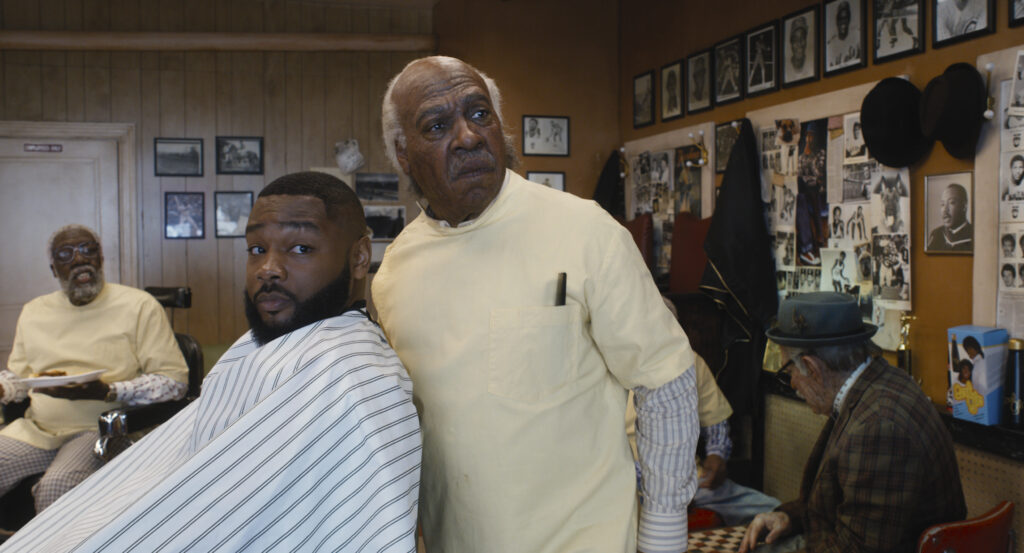 And there certainly could not be a sequel without Reverend Brown (Hall), Randy Watson (Murphy) and his legendary band, “Sexual Chocolate”, or the My-T-Sharp barbershop crew, who are still cutting up and clipping hair on the same block, in the same spot, despite all of the gentrification in Queens. Seeing Soul Glo hair products displayed around the shop makes it seem as though time has stood still for Clarence and Saul (Murphy), Morris (Hall) and Sweets (Clint Smith), but they’re not short on sharing their flagrant opinions about current events.

COMING 2 AMERICA was filmed in Atlanta, Georgia, on the Tyler Perry Studio sound stages beginning in August 2019. And whether the setting was the Joffer palace, the My-T-Sharp barbershop or General Izzi’s compound, creating an authentic look and feel was a collective effort. 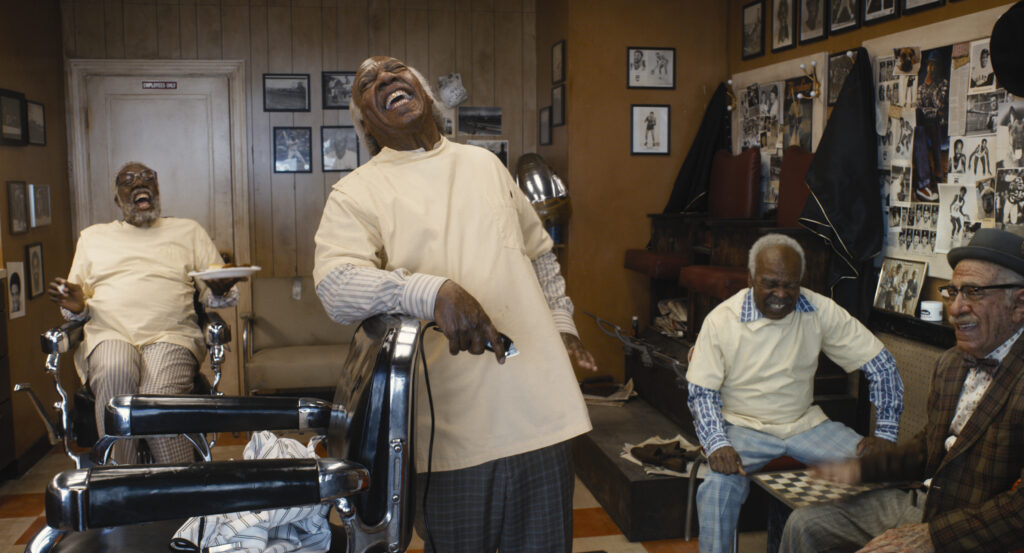 For the barbershop scenes, Williams’ focus was on making sure the actors had room to move around, so remote control cameras were used and every shot was storyboarded. Also, it was his first time working with Murphy in prosthetics, which was a learning experience. The prosthetics – skin, noses, teeth, you name it – were the creation of make-up artist, Mike Marino, for whom working on COMING 2 AMERICA was both a dream realized and an opportunity to honor his childhood idol, Rick Baker, who did the make-up for Murphy and Hall’s variety of characters in the first film. “Duplicating the make-up for all of those characters that are so famous was almost impossible, like trying to paint a replica of the Sistine Chapel,” notes Marino, “but we were up for the challenge.” Part of that challenge was factoring in how the barbershop crew, Reverend Brown and Randy Watson might have advanced in age over 30 years. That required testing colors, selecting sizes and shapes of facial features and experimenting with silicone, which is a departure from the foam latex that was used back in the day. “Silicone allows the actors the flexibility to really move their faces around and make different expressions.” At his studio is where Marino conducted the testing and also, photographed makeups. After taking mental notes and sending in photos, he saw where some tweaking would be required. “There were minor things that we changed, like making a nose bigger or smaller or even making a character’s hair darker,” he says. “We’d immediately go back and make those adjustments and when we felt that everything was right, we’d come to set and glue makeups on Eddie and Arsenio to make sure everything looked good.

Along with the barbershop crew, Marino also created the look for the new character, Baba, brought to life by Hall. “Baba is sort of a shaman, wizard kind of guy, a psychic, and Eddie had this idea to make him look like the witch doctor from Shaka Zulu. A fellow artist, Mike Fontaine, and I came up with a way that Arsenio would not only not look like Arsenio, but we’d push him to look like a weird crypt keeper kind of guy.” Hall chimes in. “Craig is great for creativity and I was lucky enough to talk him into letting me play Baba,” he says. “Overall, the set was a laugh-off and everybody was funny. It was like a competition. I wish I was Craig Brewer because he was sitting in the best seat, just watching all of us comics being ourselves, with no censors, every single day!”