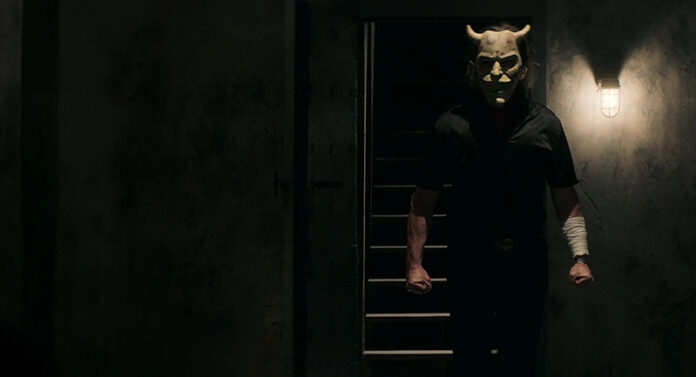 Director Scott Derrickson, writer C Robert Cargill and actor Ethan Hawke reunite after their success with 2012’s excellent horror film ‘Sinister’ and now reunite again as director, writer and actor for The Black Phone based on a short story by Joe Hill, son of Stephen King. This has several of the horror hallmarks of many of his father’s works and is set in an isolated location with a trapped figure in the same way as the excellent Misery. Set in 1978 the trapped figure here is a teenage boy Finney (Mason Thames) who has been abducted by a man called The Grabber which for once is not the nickname that married women use for Boris Johnson. The Grabber is a child serial killer played in disturbing fashion by Ethan Hawke. Ashen faced, top hatted and wearing shades he kidnaps kids off the streets into the back of his van having rendered them unconscious. Finney becomes his fifth victim regaining consciousness in the basement of The Grabber’s house with only a small, out of reach window, a grubby mattress, a toilet and of course The Black Phone that has long been disconnected and yet it still rings.

For once the person ringing is not someone claiming to be from Amazon Prime or Microsoft offering to repair your computer but the voices of The Grabber’s previous victims giving Finney sometimes obscure clues as to how he can escape. But whilst Finney tries to figure out how he might be able to escape before time runs out for him the police, led by two stereotypically inept detectives, are investigating Finney’s disappearance, and there’s little sign of the town’s police department throwing every resource into finding them. Instead they seem to pay undue attention to the dreams of Finney’s sister Gwen (a brilliantly ballsy and occasionally potty mouthed Madeliene McGraw) and her psychic dreams about where Finney and The Grabber might be as well as what happened to the other kids who went missing. It’s Finney & Gwen sibling love that is one of the strengths of the film, united  often in fear of their widower father drowning his sorrows in alcohol at the death of his wife, their mother, and taking out his frustrations on the kids in a couple of distressing moments. A scene where Finney cries in fear and anger a hard watch and it’s no easy feat for a child actor to carry off effectively but Thames is especially convincing.

As seen in Sinister director Derrickson is good at pulling off some jump scares ( that lawnmower moment in Sinister being one of several standout moment in that film) and The Black Phone has its fair share with one in particular moment having the audience we saw it with screaming out in fright.  Thames and McGraw are good and Hawke as the killer is chilling wearing a two piece mask with either the lower or upper part absent and Hawke’s face is largely obstructed throughout and yet he still conveys fear. Though the victims fate is clear there seems to be an unmentioned sexual motive to The Grabber often stripped to the waist and clutching a belt to beat and torture his victims.  Whilst the two detective’s roles are largely that of the inept cop variety there’s also some levity introduced with Jeremy Davies looking and sounding like Jim Carrey at his most psyched and for a film with such a child abduction / murder plot feels an out of place distraction.