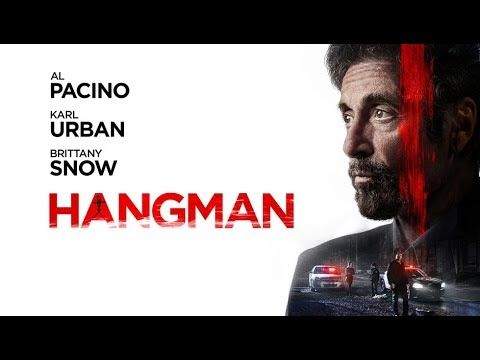 So we’ve had board games Cluedo, Battleship & Dungeons & Dragons turned into movies. Heck, even Ouija has been a film with a sequel. There’s even a movie version of Scrabble on its way but ‘Hangman’ is the latest to get a spin with none other than Mr Hoo-ha! himself Al Pacino. He’s actually the sidekick who comes out of retirement to help his old partner Karl Urban, a widowed cop,  find a serial killer who carves a letter into his victims chest and then strings them up in the style of the Hangman game. We’re no expert but surely paper and pen would have been easier.

Directed in a pedestrian manner by Johnny Martin an ex stuntman who cast Nicolas Cage in full on mental melt down mode for his previous film but here has gone one better with Al Pacino in terms of acting royalty. Pacino is now 78 years yet doesn’t look it here (that hair looks suspiciously luxurious, bouffant and without a hint of grey) his recent run of films have hardly been impressive with instantly forgotten titles like The Pirates of Somalia, Misconduct, Danny Collins, The Humbling and let’s do our best to forget the lamentable Adam Sandler comedy Jack and Jill, a career low for all involved.  Hangman is not going to change that run of duds. Whilst Pacino leaves his Hoo-ha-ing behind settling instead for a grizzled drawling of his lines it’s the sort of role he can sleep walk through and so he does.

As a serial killer film Hangman struggles and fails to escape the shadow of Seven and Silence of the Lambs and Joe Anderson gives a one size fits all performance as the shouty killer. The only spin on the genre is the inclusion of Brittany Snow (who found success with the Pitch Perfect franchise) as a far from believable Pulitzer Prize winning reporter who follows them round and ultimately gets in the way and puts herself in danger. So it’s no surprise that she gets caught up in the killer’s grand design. Hangman didn’t get a UK theatrical release and is released straight to VoD but as a thriller it fails to escape the clichés of the genre. So we have a foot chase where people run for no real reason except to be chased yet as they’re running away are shouting, ‘I didn’t do anything!’. Really? So why run then? Fleeing suspects slide across car bonnets rather than the far easier option of running round them and an endemic of daily killings that is all across the news but is left to two cops to solve rather than a team of detectives.

It’s a shame because Pacino at his best is on fire and Karl Urban has been good in the recent Star Trek reboot and was great in the 3D version of Dredd (now there’s a film that does deserve a sequel)  but here the pair of them have little chemistry with a run of the mill script whose twist in the tail is ho-hum rather than hoo-ha!