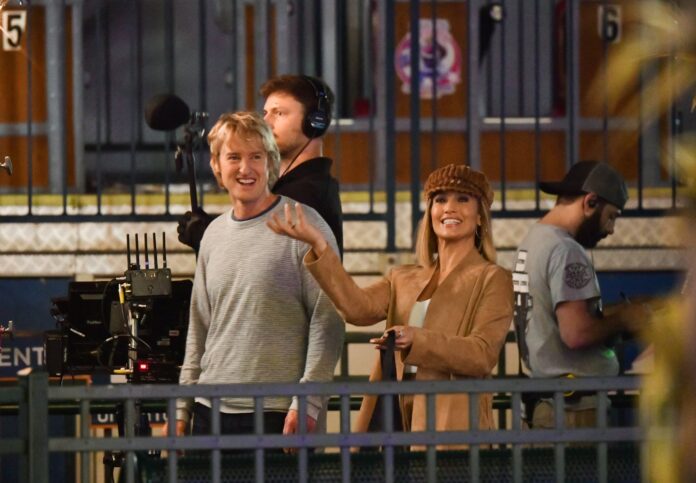 In an era of social media where nothing can happen without it popping up somewhere on digital  media it was only a matter of time before a film like Marry Me was going to be made. With J-Lo as Kat Valdez  half of the sexiest celebrity power couple on Earth with hot new music supernova Bastian (Maluma, in his feature-film debut) are about to be wed before an audience of their fans in a ceremony that will be streamed across multiple platforms. Inevitably it goes awry and she ends up with divorced high-school math teacher Charlie Gilbert (Owen Wilson) who has been dragged to the concert by his daughter and the film follows the travails of their union

When producer Elaine Goldsmith-Thomas first heard the idea for Marry Me seven years ago, she immediately saw its potential as a fresh, relevant romance for our modern age: A 21st century Roman Holiday meets Notting Hill. “It felt like an event, as well as like a movie I’d want to see,” Goldsmith-Thomas says. And, having worked with Jennifer Lopez for years, beginning with 2002’s Maid in Manhattan, Goldsmith-Thomas saw an opportunity to allow audiences backstage access to the machinery and reality of modern fame. “To make a movie about modern celebrity—to juxtapose who the public thinks a celebrity is with who she actually is as a person—interested me,” Goldsmith-Thomas says. “Being partnered with one of the most famous people in the world, and knowing her differently than anyone else knows her, is an honour and sometimes frustrating,” on occasions when Lopez is mischaracterized, misrepresented or misunderstood. “I know Jennifer as somebody who likes to sit around in sweats and eat popcorn and watch movies,” Goldsmith-Thomas says. “So, this film allows audiences to discover the human behind the image. It was a delicious opportunity.”

Despite the specificity of the life that Lopez’s Kat Valdez leads in the film, and the unique barriers that divide her world from the one that Owen Wilson’s Charlie Gilbert inhabits, the film speaks to universal themes and ideas. “Life isn’t about what happens when you fall, it’s about what happens after you stand,” Goldsmith-Thomas says. “That’s what defines you. You can’t be afraid to take chances because sometimes trying what is new is the answer. I hope this movie gives people hope, a few laughs, a song that’s stuck in their heads and a reminder that there’s a romance to trusting the universe. It’s never too late.”

Jennifer Lopez immediately connected with Kat and the film’s themes on multiple levels. “I understand this life,” Lopez says. “The film is literally going behind the veil of what it’s like to be a celebrity. This is also the first time that I’ve been able to make an album with a movie, which has been a dream of mine. It’s the first time I’ve done a movie with music since Selena, and in that film, they used Selena’s voice, so I never got to sing myself.” She was also impressed by the depth of insight in the script by John Rogers & Tami Sagher and Harper Dill. “There is no filler in this movie; everything has a real purpose and real fun to it,” Lopez says. “It’s a musical, so I’m taking romantic comedies, which I love, and my performing and my dancing and my singing, and putting them both together for the first time. That’s been exciting for all of us.

Director Kat Coiro’s was coming off of hit shows including Netflix’s Dead to Me, Showtime’s Shameless and FX’s It’s Always Sunny in Philadelphia and was drawn to the depth of the script, which made it stand apart from other romantic comedies. “I was struck by a few things, especially the classic feeling of the story,” Coiro says. “It feels like an old-fashioned rom-com, but infused with a modernity, especially in regard to social media and celebrity and fame.” The fact Marry Me includes nine original songs only heightened her enthusiasm about the film. “Everything I’ve ever done is music-centric, so to pair with Maluma and Jennifer was exciting,” Coiro says.

As fantastical as the premise for the film may seem at first, Coiro says, many of the greatest true love stories we’ve heard in our lives often started in improbable, or impossible, ways. People separated by war who find their way back to each other years later, random encounters that reconnect people decades or continents away from where they first met. When it comes to love, nothing is truly impossible. “When you start asking people how they met their partner, you’ll hear these stories that seem like everything had to line up for that relationship to happen,” Coiro says. “Beneath all the wildness of this story, these are just two people meeting and falling in love, which happens every day.”

That perspective on the film was exactly what Lopez and her fellow filmmakers were looking for. “Kat had a real vision for what this movie could be,” Lopez says. “She was also fantastic to work with throughout the development of the film. It was a big movie to shoot in the number of days that we had to shoot it, and she did an amazing job. People are going to love her work in this.”

Lopez, as both the film’s leading lady as well as a producer, brought every aspect of her experience at the height of the entertainment industry to bear on making the film into a true romantic event for audiences. “Jennifer is a consummate performer and producer,” Goldsmith-Thomas says. “She has had her eye and her ear and her heart on this film—her imprimatur is all over it—in the music, in the dance, in the costumes, in the look, in the casting. She has been with me side-by-side in the formation and then the reformation of what this film has become.”