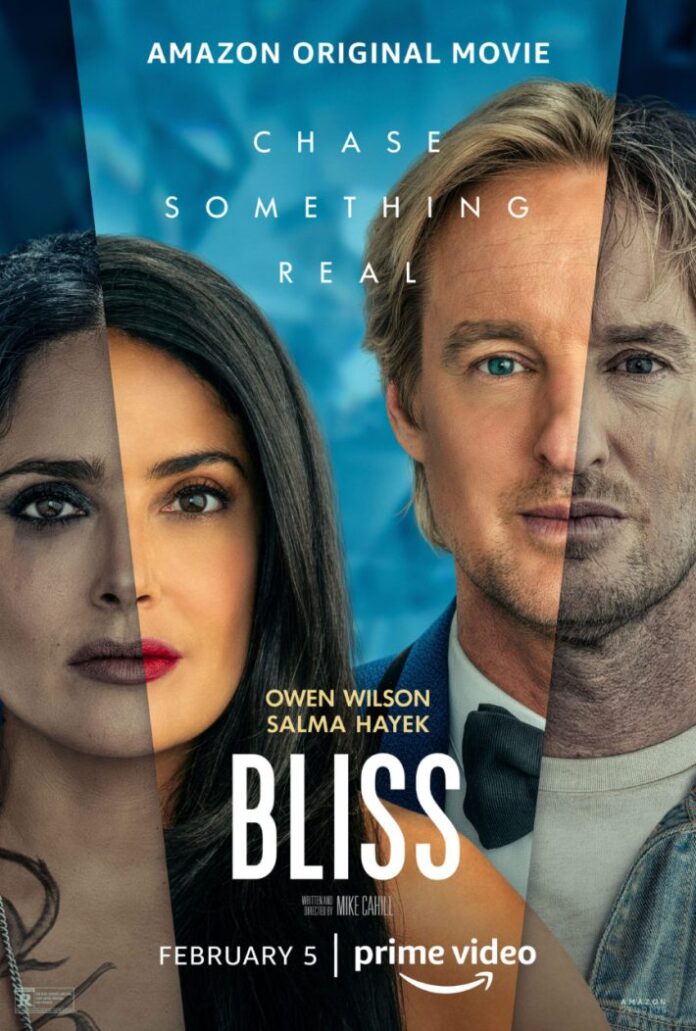 After Tenet with its mind bending time travel we now have Bliss a mind bending love story with a far smaller budget that stars with Owen Wilson working for a company called Technical Difficulties, a hint at what he will shortly have to contend with, where he seems to have spent most of his time sitting in his own office drawing pictures of indeterminate dream locations. Maybe it’s because being recently divorced he’ still hurting and when his daughter rings up asking if he’ll attend her graduation as much as he wants to go he doesn’t want to rock the boat with his ex-wife by doing so.  Distracted and non committal it all gets worse when he’s called to his boss’s office and in a surreal twisted he gets fired but accidently kills his boss.

It sets the film up for the quirky and unexpected and it continues to be so when he meets Isabel (Salma Hayek) soon afterwards. Living off the streets she seems to be a bit of a looney tune with her assertion that they are living in a computer simulation it only when she shows an ability to control people’s actions with a wave of her hand. It’s an unexpected power not readily associated with those unfortunate to be living on the streets  and the only  power that Bonkers Barry who sits outside our office block has is to be able to soil himself at will.  But convinced that there’s more to Isabel and her mantra that nothing is real than he thought Greg goes along with her able to assume these powers himself and there’s a dreamy sequence at a roller disco with them eliminating the pushy show offs there.

It’s not long before Isabel’s computer simulation theory turns out to be true ….or is it because Bliss is a Mike Cahill film, a writer-director whose last feature film, Another Earth, also had a challenging but ethereal story line.  Thrown into this is his daughter Emily (Nesta Cooper) desperately searching for her Dad who never did turn up to her graduation and when she does manage to speak to him he ‘s lost all track of time as he flits back and fore between life on the streets with Isabel and an alternate reality where they both live in a beautiful sun kissed Mediterranean town. For both Greg and the audience  it’s a question of which, if either, is reality. 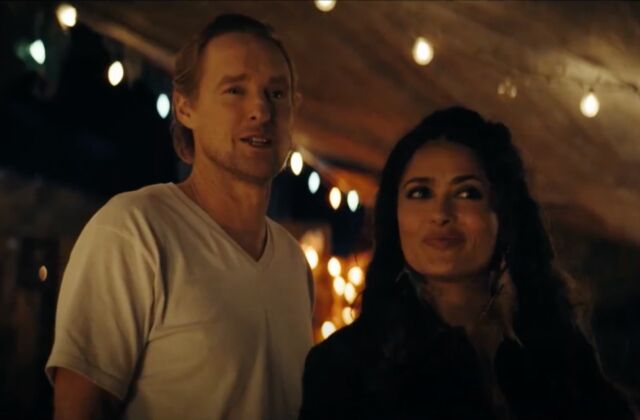 Owen Wilson, who’s becoming a bit of an impressionists favourite after Christopher Walken, has the tone of voice suited to a character bewildered by his surroundings and what’s happening. Equally Salma Hayek is ideally cast too but  at times when she delves into her crazy Hispanic woman act its unintentionally comic and undermines more serious moments. Simulation theory is not a new concept covered most famously with The Matrix trilogy (and we’ll soon have Rodney Ascher’s intriguing documentary, ‘A Glitch in the Matrix’) but when Greg tells Isabel, ‘It starting to feel like you’re making this up as you go along’ might well have an audience agreeing.

Perhaps better known for light comedy Owen Wilson has been branching out into drama and his  2017 drama ‘Wonder’ with Julia Roberts was very good but Bliss for many might be too ironic a title for audiences.

BLISS is released on Amazon Prime Video from 5th February 2021.