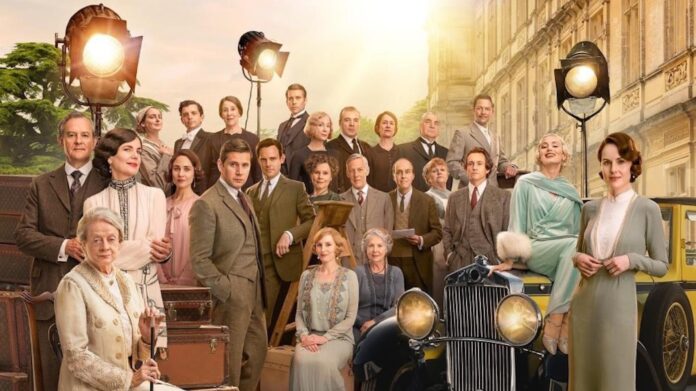 After the huge success of the first film we now have a sequel with Downton Abbey A New Era and this time the building is in need of attention. Derelict and falling apart we’ve not seen such a wreck on screen since Judy Finnigan left This Morning. But it’s the leaking roof and diminishing funds that sees the Earl of Grantham (Hugh Bonneville) allowing what he calls ‘ghastly’ film people using the venue as a location  (whether this is an in-joke by screenwriter Julian Fellow we’ll never know). So it’s not long before director Jack Barber (Hugh Dancy) arrives with his leading man, the rakishly charming Guy Dexter (Dominic West) and leading lady, the drop dead gorgeous Myrna Dalgleish (Laura Haddock) neither of which are quite the image of their silent film screen image characters.

At the same time Dowager Countess (Maggie Smith) learns she has inherited a villa in the South of France from an aristocrat she had a dalliance with years previously. The Earl along with Lady Mary (Michelle Dockery) are invited by the aristocrats son to arrange the handover of the venue much against the will of his widowed mother who uncharacteristically for the French doesn’t immediately surrender the property. But it’s an ulterior motive that the son has invited the Earl over with a bombshell revelation.

Downton Abbey A New Era is now set in the late 1920’s and freely borrows from other films set in a similar era most notably the pilfering of the main joke in the classic ‘Singin’ in the Rain’. Maggie Smith doesn’t quite get the showboating ride she normally has with her character who seems older than the Abbey itself and the new characters are fun with Dominic West’s actor striking up a close friendship with Barrow the butler and Hugh Darcy’s director developing a fondness for Lady Mary

Julian Fellowes script for these ensemble films gives everyone a look in and its perhaps Alex McQueen, one of our great comic actors best known as Neil’s father in ‘The Inbetweeners’, who gets the supporting role that steals every scene he’s in as an officious sound recordist. But the cast featuring as it does a wealth of much loved British actors are all clearly at home with their cosy roles in what is a cosy film that’s highly enjoyable.

Read our review of the first Downton Abbey film HERE