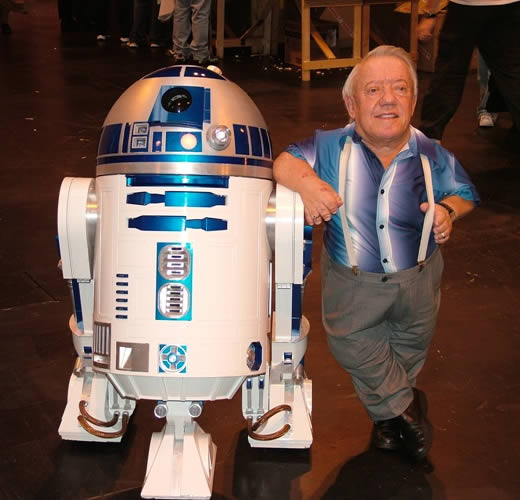 Only 3ft 8inches ( 112cm) tall Kenny Baker was to make an enormous impact on the film world in a role where his face would never be seen. As the robot R2-D2 in Star Wars and its subsequent films he achieved worldwide fame but his roots were anything but glamorous.

Born on August 24th 1934 near Birmingham his parents were a draughtsman and a dressmaker who themselves performed in their own dance band until they separated during the Second World War and Baker was taken into care by a Christian charity who helped children with disabilities and he was schooled in Kent until he was 16 where he was approached by an American producer about working in a performance troupe which in turn got him further work in panto as well as work as a clown for Billy Smart’s circus where he teamed up with fellow performer, the similarly sized Jack Purvis and formed a double act who joined him in auditioning for Star Wars for George Lucas. It was a role he initially turned down not wanting to be stuck in what was little better than a dustbin on legs in sweltering heat when they were to shoot in Tunisia. His mind was changed when he knew that Sir Alec Guinness was also to be in the film and figured that if such a gifted actor was to appear then who was he to turn down the film. It was also an immense help to Lucas as he couldn’t use kids to play the role as they weren’t strong enough to rock the robot from side to side when needed. His friend Purvis was also cast as the chief Jawa. Together with Anthony Daniels as C-3PO they would form and enduring and loveable screen partnership. Unfortunately it was not a mutual friendship off screen with Baker purportedly incensed by what he perceived as Daniels snootiness and the pair have spent much time sniping at each other over the years through numerous interviews and Baker when asked about attending a reunion once said, ‘It depends. If you invite his lordship, the one with the golden balls. If he comes, I won’t be there!’

Both actors found the roles difficult due to the costumes where the heat and discomfort was intense. Baker played other roles in the franchise which included an Ewok along with his beloved wife, Eileen, who also played one of the teddy bear like creatures. But again th costumes were turmoil to perform in as actors were unable to see out of the masks which kept steaming up and if they fell over it was difficult to get up gain without help.

Despite the acclaim and fame the character bought him the robot R2-D2  was not his favourite role but rather it was as a group of dwarf pirates in Terry Gilliam’s superb children’s fantasy, ‘Time Bandits’ that he enjoyed playing most saying, ‘The director Terry Gilliam’s such a nutcase, he’s so enthusiastic, you can’t help enjoy it. It was just a fun film to make,’

Baker worked with many respected directors including David Lynch on The Elephant Man, Mike Hodges on ‘Flash Gordon’, Milos Forman in ‘Amadeus’ and Neil Jordan in ‘Mona Lisa’ as well as the infamous 1978 Star Wars TV holiday special.

He had two children with his wife who passed away in 1993 and it was Darth Vader himself or more rightly Dave Prowse who was beneath the black helmet, who convinced him to do the fan conventions and it provided him with regular income and he loved to meet the fans freely admitting that, ‘It’s like a party. We meet up in the hotel, have a meal, get drunk and then meet the punters the next day with bleary eyes’.

For some years he suffered from respiratory problems and lived in Preston where he was cared for by his nephew and when not working the Star Wars convention circuit was content to watch wildlife documentaries.

Apart from one previously mentioned exception he was loved by all he worked with and it’s George Lucas who summed up his appeal as being ‘a real gentleman’.

The making of Finding Dory…….