Principal photography for “Godzilla vs. Kong” took place in Hawaii in the U.S. and in Queensland, Australia. Both were transformed to help bring to life the story’s settings, realistic and fantastical, from battles on land and at sea, and a breathtaking Hollow Earth that might be the very origin of the Titans. Wingard’s creative team included director of photography Ben Seresin, editor Josh Schaeffer and VFX supervisor John “DJ” Desjardins, along with production designers Tom Hammock and Owen Paterson and costume designer Ann Foley. 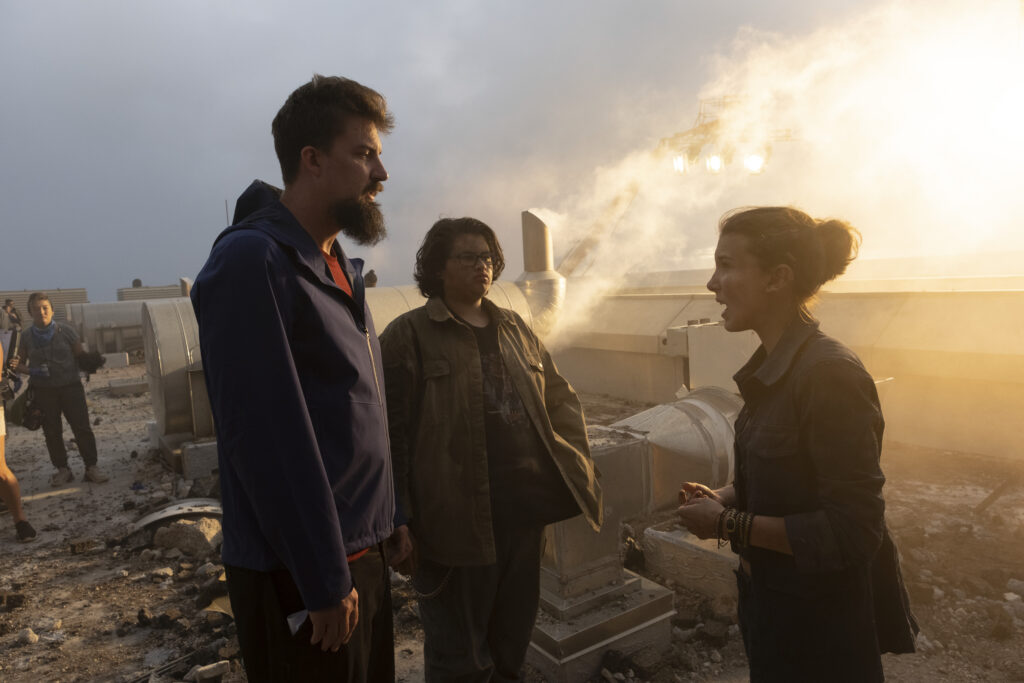 Beginning in Hawaii on the island of Oahu, the designers utilized the wilds of the region’s jungle environment as the Pacific Ocean’s uncharted Skull Island biodome where Kong and Jia reside, observed by a legion of Monarch researchers and scientists. The Hawaii Convention Center served as a variety of interiors for both Monarch and APEX. Additional locales in the area used for filming included Lanai Lookout, the Kapolei Stages, Sand Island State Park and various addresses in the state capital of Honolulu and throughout the island for their super size sets.

The USS Missouri Memorial in Pearl Harbor and a portion of Kalaekoa Airport doubled as the transport carrier that ostensibly journeys Kong across the sea to his new home. The site served a critical sequence in the story, which came about because, as Wingard relates, “We asked ourselves, ‘Where have we not seen these characters battle before?’ We’ve seen them fight in the city, in the jungle…all types of surroundings. But we realized we hadn’t seen them in a battle in the ocean.”

“Hawaii was fantastic,” Hammock states. “It could be a bit crazy at times because the weather would fluctuate, and you never know what the volcano’s going to do. We literally scouted the movie and then the volcano started erupting and lava covered a bunch of the locations we’d fallen in love with. So you’re always at the mercy of the elements there.”

Moving to Australia’s Gold Coast, the company accomplished some location work as well as the majority of its stage work, with super size sets that featured the transport ship’s bridge—including an outdoor water tank—Monarch’s outposts and mission control, Antarctica “exteriors,” the busy streets of Hong Kong, the cockpit of the APEX Heli-Craft, and the massive Hollow Earth. 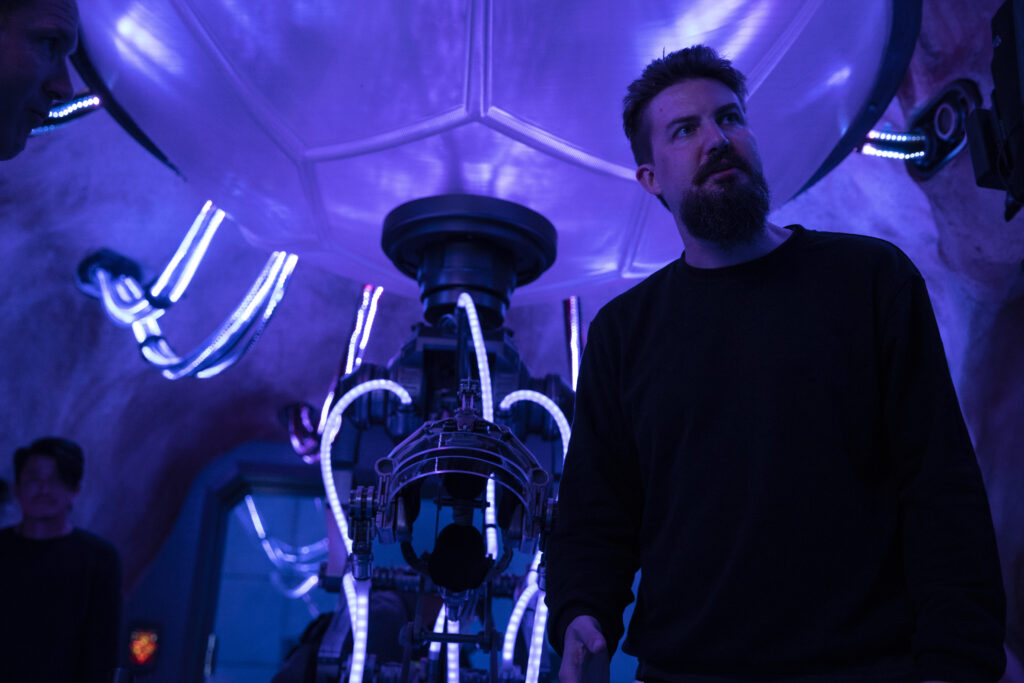 Producer Eric McLeod says, “Australian crews are among my favorites. This was my third film in four years there, and many of the same people have worked on all three. On a film of this scale and magnitude, it’s really about facilities available and the people you hire who can deliver on the project, and I just think Australia has some of the best of both in the world.”  Wingard concurs. “Shooting in Queensland was fantastic. Great stage space, incredible crews, and so many interesting locations, from jungle to cities you can basically find whatever you need there. ‘

One of the most critical of the super size sets in the film, according to Hammock, was “Hollow Earth’’. ‘To me, it was the biggest challenge from a design aspect. We developed it with Adam’s mantra of wanting to do as much of it in camera as possible. That really drove everything: starting to look around the world at different geology, different forests that were unique, thinking about what we could actually get in camera as a base that might not look totally familiar to the audience, and then what could we build in visual effects on top of that in-camera base. Hollow Earth ended up having that slightly familiar but also has a slightly alien feel to it. We didn’t want to go too far with it, because it is still of this world, but you want it to be distinctive.

“We split Hollow Earth up into parts and were looking at, for instance, lighting references that our cinematographer, Ben, could work with as well,” he continues. “For example, from Hawaii we were looking at the lighting in lightning storms that occur over volcanic eruptions and what the lighting’s like in that, and then combining that with Australia’s rainforest. Part of the advantage of being in Australia was we were able to draw inspiration from real rainforest areas that have living fossils, like Wollemi pines, and then also look at unique geological landscapes and combine all that inspiration together into the landscape of Hollow Earth.”

Paterson adds that much of the visual inspiration came from the notion that “we imagined there would be a central core that generated some sort of photosynthesis power that supported the living things.” To that end, he says, “An artist, Michele Moen, did a lot of paintings for us, and we brought in a lot of reflective colours that you would find in an opal. For example, the handle of Kong’s sceptre is almost opalized, as fossils often can be.” 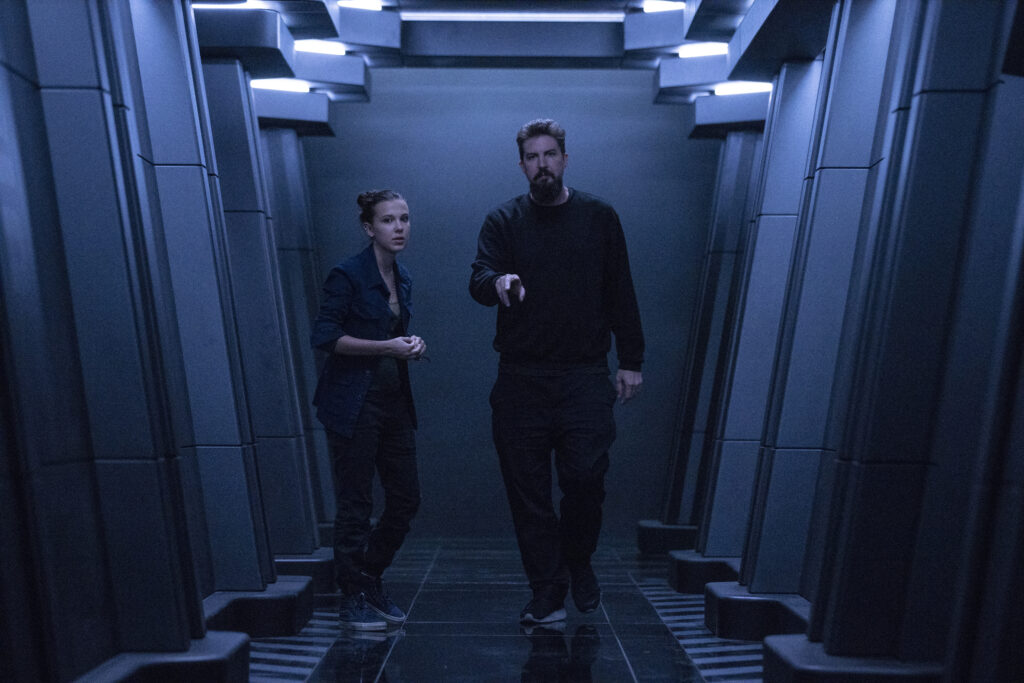 Producer Alex Garcia feels that “the journey through Hollow Earth is spectacular. Adam came up with these concepts, along with Tom and Owen, of this world that really exists on top of itself. Gravity reverses as you go through the middle of it and there are structures that meet one another in the sky. And there’s also peril in every corner. There are creatures that we’ve not encountered before, that our characters in the films have not encountered before. As they approach the centre of Hollow Earth, going through a myriad of different landscapes and challenges, they get to this primordial site that is evidence of some kind of civilization having been there and as they enter it, it becomes clear that this is likely where Kong’s ancestors came from. There’s a massive temple with ancient markings, as well as evidence of a great battle having taken place. It’s an incredibly emotional moment in the film.”

Putting the scale of the space for the super size sets in perspective, Paterson offers, “Because the Titans are so much bigger than human beings, the temple, for example, is probably 40 times the size of St. Peter’s Basilica, which is already enormous. Without making every shot a CG shot, we wanted the set to have the ability to progress some of the human storyline—how the scientists from APEX and Monarch view the landscape, and so on.”

Despite Hollow Earth’s many unique opportunities to relate scale and scope, Paterson says that, from his perspective, ”I think probably the biggest challenge was the Hong Kong streets. Without giving too much away, Godzilla and Kong fight, and because of that they destroy large parts of the area. We built a physical set, which we were planning to build outside, but we decided we would bring it inside because of weather issues and lighting issues. That said, I think that the sequences came out really well.” The designer also managed to economize quite brilliantly. “Every set that we had already built and filmed and had pulled apart went into making the rubble for that set,” he smiles.