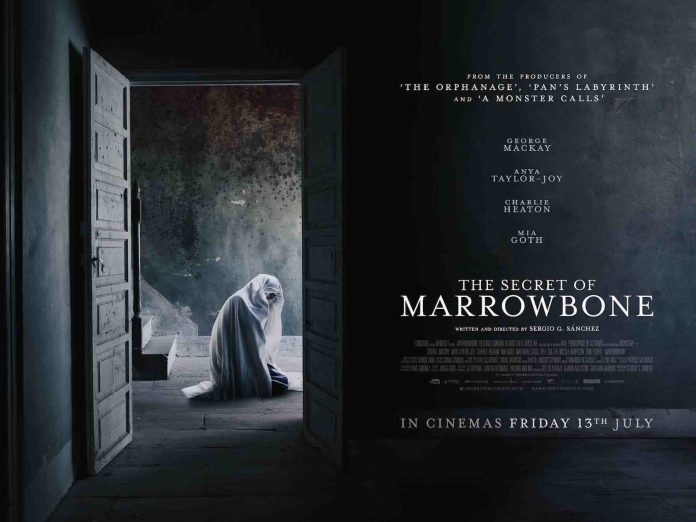 Marrowbone or more correctly bone marrow is that delicious meal that dog’s love to munch on. There’s  nothing more that an old dog loves to munch on than a bone which is why we were surprised that Marrowbone is not about our Deputy Editor’s adulterous ex-wife and her bedroom shenanigan’s.

Anyway what the film is actually about is a young man Jack (George McKay ) and his three younger siblings led by Allie (Anya Taylor Joy) who live in a huge somewhat delapidated old house with their Mum. All would be fine if it were not for the fact that Mum is dead and has been for quite some while and whilst the children are desperate to stay together knowing that they will be split up if their secret is discovered.  For the young children, protected only by their older brother, it’s upsetting enough and at one point a young child distressingly cries out, ‘I want to be with Mummy!’ Unfortunately at this point his mum is already six feet below in the back garden.

Whilst their predicament is precarious enough as it is what compounds the danger is that there is a sinister presence in the house and it’s not Deputy Editor’s ex-wife wearing a mashed avocado nightly face mask.  Written and directed by Sergio G. Sanchez  this is his feature film debut having previously written The Orphanage and The Impossible both for his fellow Spanish countryman director J A Bayona himself no slouch in the super creepy,  super scary department having cooked up some decent set pieces in this year’s Jurassic World Fallen Kingdom.

Sanchez has constructed some decent scary set pieces in Marrowbone and staircases and attics play their fair share as locations to spook the audience . Whenever a character makes that classic movie mistake of going somewhere on their own you know something bad is going to happen and when it’s a young child it only heightens the suspense.  Equally there’s an utterly charming sequence where the youngest boy stands in his late mother’s bedroom pining for her as he looks round looking at her clothes and smelling her perfumes. It’s a sweet sequence offering a moment of relief from the creepy sequence which is only a scene away.

Marrowbone is a directors film more than an actors who are there merely to facilitate the shocks and as such the film owes much to Sanchez’s own The Orphanage as well as Psycho too which is no bad thing and his use of a low-fi sound track which rumbles through the seats instills some of the set pieces with an impending sense of dread.  At one hour and fifty minutes it’s a little overlong and fails to set its era as clearly as it should but for Sanchez this promises a bright future in the genre.