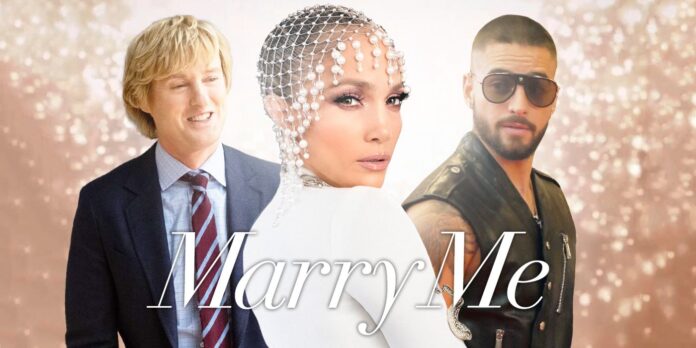 It’s hard to imagine J-Lo on a night out getting tipsy as at the centre of J’Lo’s new film is a song that seems to be about such an experience as she coos about Merry Me, Merry Me, Merry Me. Turns out she’s saying, ‘Marry Me’ which is more in keeping with the thrice married songstress rather a big night out in the Old Kent Road getting leathered on WKD and bringing up a bag of chips in the gutter. Marry Me has the song singing super star as a song singing superstar Kat Valdez engaged to song singing superstar Bastian (Maluma) and the film’s title is a duet that they perform in a live streamed concert where they will also get married.  It’s the sort of tasteless idea lacking any decorum that you expect a desperate influencer to come up with for a few more likes.

It’s only when a clip of Bastian kissing a one of Kat’s staff goes viral during the concert that sees her calling him out and instead picks out divorcee dad Charlie (Owen Wilson), who is at the concert with his teenage daughter, whose Marry Me placard he is holding. Called up onto stage he finds himself marrying her and it must be have been a relief that it wasn’t an Ozzy Osborne gig invited up to dine on bats  – perhaps that’s what happened at Wuhan. With her manager Colin (John Bradley – looking like Matthew Broderick’s chunkier brother) trying to pay him off and get the marriage annulled but Kat is having none of it. So the film follows them getting to know one another in the hope that love will blossom but the path of true love is obstructed when Bastian comes back on the scene and tries to woo her back.  Bastian comes over as the overly confident, somewhat arrogant Mr Lover Man though frankly his character would be better placed on a poster campaign warning women not to leave their drinks unattended. This is real life singer Maluma’s first film and it’s an unusual move for his people to let him take a role of a love rat so some kudos is due to him.

As a seemingly mismatched couple Lopez & Wilson are engaging especially Wilson as a maths teacher dedicated to his pupils with Kat making unannounced appearances at his after school maths club classes. Bizarrely, though she has paparazzi initially following their every move, the films soon dispenses with them highly unlikely in an age of social media when even Gemma Collins can generate headlines for confusing the box opening on Deal or No Deal with Christmas Day. Wilson has a light comic touch and is sincere in the role despite there being a blink and you miss it joke about his appearance Kat’s constant instagram streaming with a fan asking, ‘What’s with his nose?’. But Marry Me, based on a graphic novel , has the feel of a vanity project and a rather cynical one at that with a load of songs presumably that will appear on J’Lo’s latest album and though her character is pleasant enough there are egotistical moments when Kat attends Charlie’s prom night with him and, without being asked, just gets on stage to sing to the students.

It is worth remembering that J-Lo has turned in decent and at times awards nominated performances in films that have included the excellent Out of Sight and Hustlers. Marry Me is light weight stuff in the extreme and is really one for the fans and their unfortunate boyfriends dragged along preferring to see her in Anaconda than anything else.

Watch the Marry Me trailer……HERE

Read how J-Lo got to Marry Me…….HERE