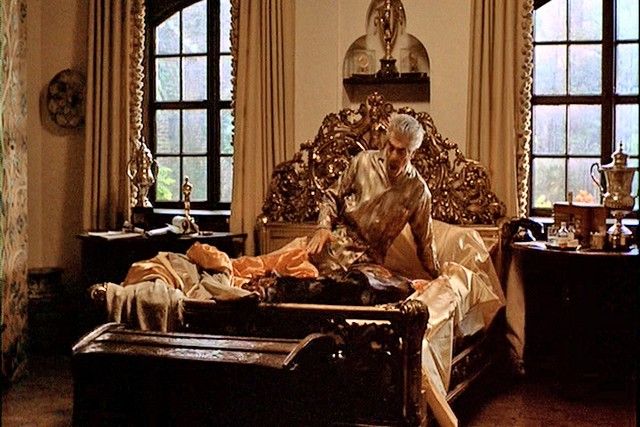 The stories of director Francis Ford Coppola’s experience of making The Godfather are many and varied but the scene that is perhaps most remembered is that of studio head Jack Woltz having knocked back the Corleone’s consigliere request to cast Johnny Fontaine in the studios new film only to find that they would make him an offer he could not refuse. It was not so much an offer more an implied threat when Woltz wakes up one morning in his huge bed to find his hand sticky with blood and the bed sheets saturated too and as he sweeps back the bed sheets to reveal the decapitated head of his beloved $600,000 horse on the mattress. It was a scene to demonstrate that the Corleone family could get to you at any time in any place. Cinema audiences were shocked and there was a sizeable number of people who demanded to know if the horses head was real. It was.

The prop department had made a fake horse head at the insistence of the studio but Coppola was displeased with it telling them that it just didn’t look real. So it was an art director who went to a dog-food manufacturer in New Jersey and picked out a horse that was to be euthanized.

In the book the horses head is found on a bed post but in the film its slow reveal under the bed sheets was dramatically more interesting. It was the mock horse head that was used for rehearsal as actor John Marley rehearsed the scene. Ready to shoot Marley’s hand. silk pyjamas and bed sheets were dressed with the fake blood and the horses head placed at the bottom of the bed ready to be unveiled. Unknown to Marely was that the mock horse head was now replaced with the real horse head which had been packed in ice and was now placed in the bed ready to be revealed. The story goes that during the first take his bare toe touched the head and he lost control and those screams at what he had touched and what he saw were all too real.

Further takes, as is the wont of filming, required more takes and the props men, between takes would lift the heads from the sheets and put it between the ice so that it would not break down as the hours passed.

The scene became iconic in a film that remains one the one the greatest ever made and was rewarded with three Oscars including Best Film. Paramount studios were pleased, Coppola was now A- list and Brando’s reputation was temporarily restored but it did not please one person That person was Frank Sinatra who allegedly inspired author Mario Puzo to create the Johnny Fontaine character. Sinatra was incandescent with rage at the what he felt was a personal smear and verbally abused author Puzo in a restaurant who had now moved to Hollywood to work and the singer went on to successfully sue the BBC in 1972 for suggesting that he had been the inspiration for Fontane.

The fake horse head was auctioned in 2013