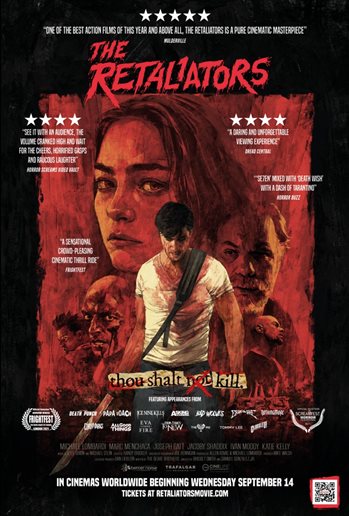 The Retaliators opens with a voiceover proclaiming, ’Sometimes it’s best to keep evil alive’ so it’s not unreasonable to expect a cameo appearance by Simon Cowell somewhere along the line, So with a title of The Retaliators could this be a film about dumped X-Factor contestants? The answer is No but what the film is still about vengeance as preached by widowed dad and pastor John Bishop (Michael Lombardi) to his congregation.  His ‘turn the other cheek’ sermonizing is prompted by a recent personal experience  when a bully boy costumer (played by ‘Clerks’ star Brian O’Halloran) who purloins the pastors Christmas tree at a local market. It’s clearly not a season of goodwill further witnessed when drug dealing, bald bad guy Ram Kady (Joseph Katt)  bludgeons a rival dealer to near death shoving him into his car boot. But things get worse at a petrol station where Ram encounters Bishop’s daughter Rebecca who hears the suspicious sounds from his boot that seals her fate too.

It’s what prompts pastor Bishop to revaluate his ‘turn the other cheek’ ethos and Jed, a local detective (Marc Menchaca) muddies the moral waters asking if he would want a minute alone with the man who murdered his daughter. Jed has his own reason for asking this as his wife was also killed by a biker gang also with bald heads and big beards looking like they have their heads on upside down (most of the gang are played by members of heavy metal band Five Finger Death Punch and Tommy Lee puts in a fleeting appearance too) seen in a prolonged flashback. But it’s Jed who has taken the law into his own hands having set up a Retribution Ranch out in the woods where he takes the conflicted pastor. What we get is a sort of Bruce Campbell as Ash style survival with the biker gang and a collection of not-really-zombies running amok and where the splatter factor is ramped up to the max in an outrageous finale hinted at when a wood chipper is glimpsed that you just know will end up not binge used for what it’s really intended.

The Retaliators has a gloriously bloody carnage filled climax to please horror hounds and there’s the occasional nod to the slasher films of the 1980’s notably Evil Dead but there’s a whiff of Hostel too with the special effects earning their salary with, at times, inventively campy kills in an enjoyable exploitation flick.