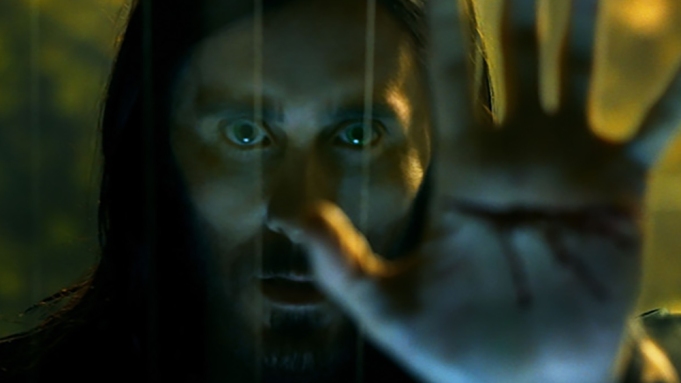 After the mixed reaction to his Joker on Suicide Squad Jared Leto gets another chance to play a comic book character and this time its Dr Michael Morbius who has been suffering from a rare blood disease since childhood but whose brilliant mind saw him become an acclaimed doctor having invented a blood substitute. Right from the start Morbius is a lank haired, pasty faced guy who might look more at home at an Emo convention than in a scientific laboratory where he also keeps a whirling cauldron of bats that he captured in Costa Rica in the film’s opening scene.

His blood substitute has bought him a Nobel prize and also a degree of relief to his needy childhood friend Milo (Matt Smith) who also suffers from the same blood disorder necessitating crutches to walk so when he finds that Morbius has discovered and injected himself with a possible remedy for their condition he’s keen to get a dose of the elixir too. It’s hardly surprising having been confined to a chair and tended by their childhood doctor played by Jared Harris looking like Derren Brown’s older brother and when Milo and Morbius walk down a busy pedestrianised street it’s like an audition tape for Monty Python’s Ministry of Silly Walks.

Morbius is reluctant to let Milo have a dose of the potential cure having found that the side effects transform into a vampire sucking the life out of anyone he sets upon in a manner not dissimilar to Amanda Holden marrying Les Dennis. That’s not the only problem he has having set up his personal laboratory on a ship when he finds himself transforming into a vampire and slaughtering all the security guards draws him to the attention of the police investigators Simon Stroud (Tyrese Gibson). Now a wanted man Morbius flits around New York looking for an antidote to his vampiric desires unable to resist draining his laboratory fridge of substitute blood plasma in the same way that George Best must have relished a wedding reception’s welcoming tray of drinks. By now it’s all got increasingly daft with Morbius setting up his own lab in a low rent counterfeiting factory where it seems you can also make blood plasma.  It’s not only the police that he has to contend with but also his friend Milo who gets his hands on the miracle cure and now parades around the city in pin stripe suit and like Morbius has a face which the visual effects team constantly change more times than Katie Price’s plastic surgeon.

The central characters Jekyll and Hyde dilemma is never really explored and though there’s a decent enough first act but falls quickly prey to the same issue as the recent Venom Let there be Carnage with a broadly flat narrative which is building towards the inevitable climatic smack down and the obligatory mid credit sequence that points to a possibly intriguing set up for a larger scale multiverse.