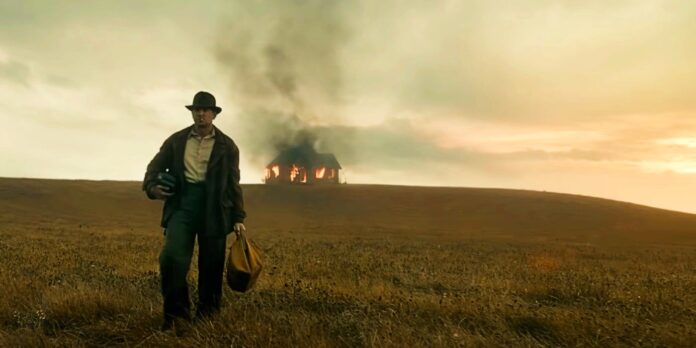 It seems that whenever someone wins an Oscar their follow up film is nearly always a monumental let down but that is not the case for Guillermo Del Toro’s Nightmare Alley a passion project and a remake of a 1947 film noir rather than a documentary about the work done by Katie Price’s gynaecologist. Bradley Cooper is Stan a drifter who right from the start is a wrong ‘un having dumped a corpse in a derelict building and set light to the place he goes on the run and falls in with a travelling group of carnies,  a freak show of bizarrely deluded entertainers like some sort of precursor  to the Britain’s Got Talent auditions. Del Toro has cast a host of his favourite actors including Ron Perlman but also Willem Dafoe, Toni Collette and Rooney Mara amongst others. Stan He falls for Molly (Mara) who become his  on stage assistant and later co-conspirator when they leave to set up their own act after he discovers a knack for being a faux psychic.

Two years later the pair have developed an act for wealthy audiences which includes a well connected psychologist Lilith (Cate Blanchett) whose own work enables her to see that their act as little more than a clever reading of appearances and verbal clues. In that respect they both have an insight into people who are all too willing to believe and give up personal stories – the difference here is that Lilith despises Stan preying on the vulnerable in order to relieve them of their money. Nonetheless the pair along with Molly team up for the big con as they set their eyes on the hugely  wealthy widow played by Richard Jenkins pining for his late wife

This is typically noir territory and when Stan is warned by another carny of the dangers of the tricks he will master that will soon have him believing that he does have a genuine power so you know he is heading for a fall and that fall, when h it does arrive, is perhaps a disappointment in that its clear what and how it’ll come. At 140 minutes Nightmare Alley is also a little too long for what should be a snappy film noir and yet despite the length there are underdeveloped characters played by the big name actors and unexplored relationships most obviously between Stan and Molly. But this aside there is much to enjoy here from the starry cast who give there all to the most stunning production design sumptuously photographed  and it’s never dull making this one of Del Toro’s best films in an already impressive catalogue.