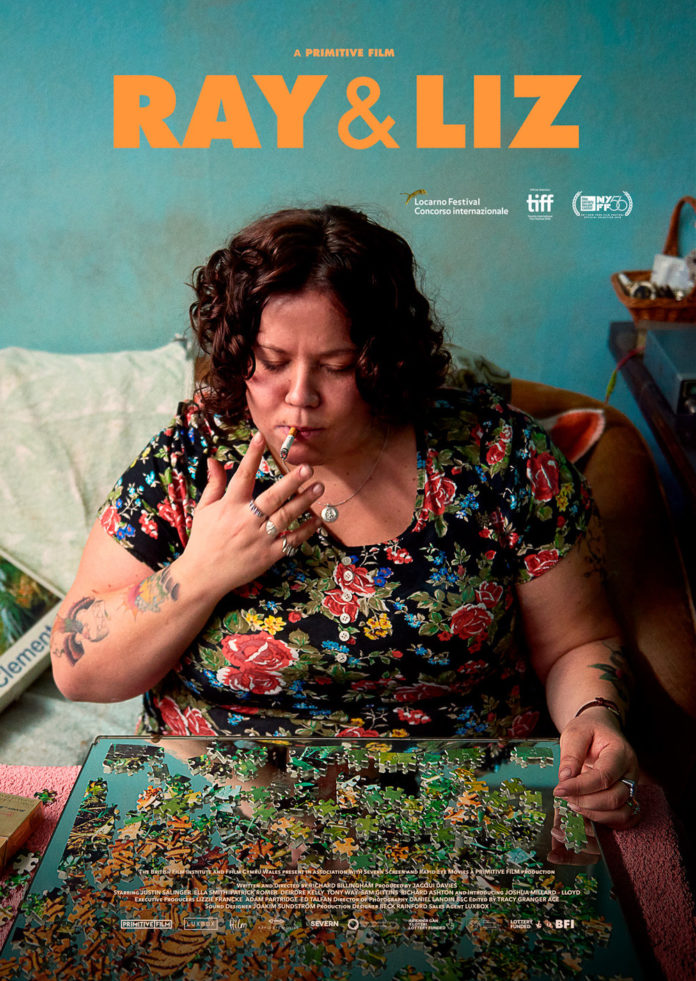 Few if any are familiar with Ray and Liz the untold love story of actor Ray Winstone and monarch Queen Elizabeth II but that’s solely because we just made it up. Instead Ray & Liz is the debut feature by artist turned writer director Richard Billingham loosely autobiographical film about the parents of two young boys that flits back and fore between them raising the boys firstly in a Birmingham end of terrace 2 up 2 down house but starts off with Ray, now an old man living on his own in a high rise flat never leaving the flat sleeping most of the day with only a neighbour coming in to drop off 2 litre bottles of what looks like ropey homebrew which Ray happily wolfs down amongst the squalor. It’s a bleak start to a film that gets ever more so with his brother Soft Lawrence, a bit simple and terrified of Ray and Liz lodger Will (Sam Gittins)  but nonetheless agrees to baby sit for their toddler son whilst they go shopping. Played by Tony Way, Lawrence is a timid simpering man and Liz warns him off looking for a stash of booze in the house that she’s bought with Ray’s redundancy money. So when the conniving Will arrives with Lawrence now on child minding detail what unfolds is arc rah moment that you can’t take your eyes off as it gets worse. Tony Way might not be a household name but you’ll know his face (he was Lizbeth Salander’s hacker friend in David Fincher’s version of  Girl with the Dragon Tattoo) and its a shame that he’s not seen more often as he’s great in the role. But it’s an opening salvo in how feckless Ray and Liz are as parents and as the children get older their parents get ever more bereft of any parenting skills with Liz, a chain smoking harridan and Ray now redundant with no drive and seemingly no willingness to get off his arse and get a job content instead to make Liz cups of tea and watch as she goes about her sewing or jigsaw puzzles with no regard for their kids at all and it seems inevitable that something truly awful is only ever just around the corner. Director Billingham has painted a depressing yet all too real picture of parents all too familiar from newspaper headlines. With no money they’re constantly looking for handouts but seemingly only to buy Liz more cigarettes or feed the menagerie of animals (throughout the film they have pets galore which they seem to treat with similar disregard). Their flat is run down with wallpaper peeling and the kids having to feed themselves usually with pickled cabbage sandwiches and without the boys even being noticed when they’ve gone out all night despite their youngest not even being in double figures age wise. It’s little surprise that starved of love he hugs a friend’s mother when she shows him a smidgeon of concern and it’s compounded even more when his brother asks a visiting social services officer if he can be put with foster parents only to be told. ‘No’.

Actress Ella Smith is great as the monstrous self absorbed Liz whilst Justin Salinger is fine in the underwritten role of the young Ray whilst Patrick Romer has slightly more to do as the old Ray. Very much in the Mike Leigh / Ken Loach school of film making this is at times a brutal and bleak watch yet sadly all too plausible.

Here’s the Ray and Liz trailer…….