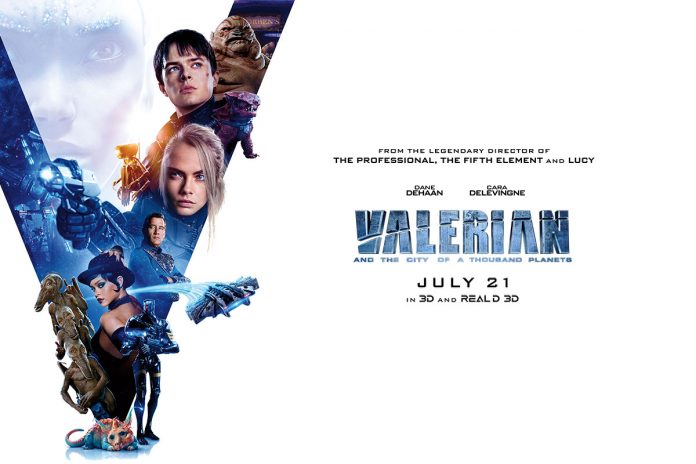 So here’s the final blockbuster of the summer, the much anticipated Valerian reputedly the most expensive European film ever made and much has been made about it bombing at the box office in America. It was hardly surprising as this is very European in sensibility and is likely to find more of an audience here than in the States. After all Spielberg’s animated version of Tin Tin fared little better in the US but was more appreciated in Europe.

Prospective audiences should ignore all the negative press and go into this with an open mind because it all starts well enough with its opening scenes way back in 1975 as space stations lock together and astronauts from different countries greet each other all set to David Bowie’s Space Oddity. It’s a montage that extends to modern day and far beyond into the 28th century with alien life forms greeting each other for the first time on a massive space station – the city of a thousand planets. It’s a stylish sequence which sets the tone for the rest of the film yet also flags up what will be a flaw in the film – it’s just too long.

Dane DeHaan, who has something otherworldly about him anyway, plays Valerian, a space operative partnered with Laureline  (Cara Delevingne) lounging around in a beach idyll and its Valerian who craves after her imploring him to marry him and which she rightly is reluctant to do because of his extensive list of previous female conquests. Frankly Valerian comes over as a bit of a sex pest and its Laureline who has the upper hand here throughout resisting his less than obvious charms.

There task turns out to be to identify just who or what has started wiping out a race of peace loving aliens whose pets have the ability to poo pearls which for some reason is implicit for keeping the universe safe and aliens living in harmony. What follows is a not always coherent plot which frequently goes off at tangents to no obvious benefit save to show off a variety of worlds and aliens before getting back on track.

Based on a series of well regarded French comic novels this is undoubtedly visually opulent and was a childhood favourite of director Luc Besson who has written the script too. What follows is his usual strong female role (though not strong enough it seems to be in title as the books do) and, yes, Cara Delavingne is perfectly fine in the role but perhaps less so is Clive Owen who looks uncomfortable throughout with the stilted dialogue. Owen is a great actor but just doesn’t seem to get the roles that would catapult him into the A list and this is another one to add to that list. Similarly for Ethan Hawke who plays some sort of pimp to the far better served  Rihanna who plays a shape shifting ‘exotic dancer’ and her first appearance is enthralling as she seamlessly segues between live action and CGI.

This is typically Luc Besson with an especially good set piece early on set in two parallel universes which is wildly imaginative but the film never really matches this as the plot unfolds ending with a somewhat cliched climatic scene which involves the tiresome countdown clock ticking away to armegeddon which you know is never going to happen.

Perhaps outraged at the huge budget this is not the disaster that many are making it out to be and the money is all on screen with some stunning visuals but never allows the images long enough to be appreciated. This is a full on CGI fest which to some will be irksome but for most part this is highly imaginative and original.