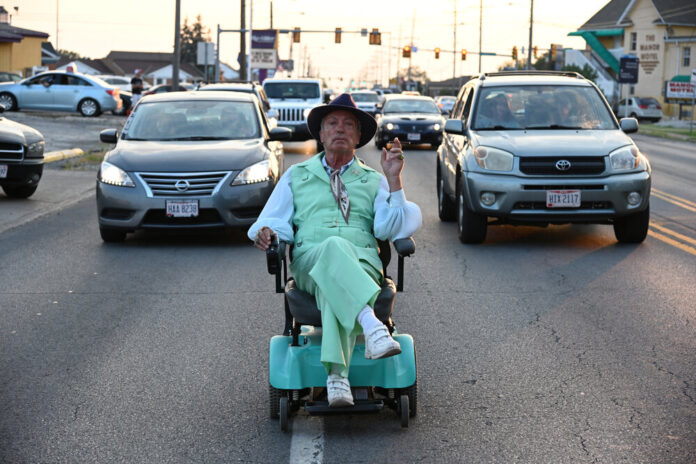 A singing aviary is an unlikely premise for a film as is the case here as there’s not a swan in sight banging out 70’s hit ‘Chirpy Chirpy Cheep Cheep’. Instead this is the Swan Song for Pat Pitsenberger (Udo Kier) an elderly camp hairdresser from Sudonsky, a small tie in Ohio who bursts onto the screen in the spotlight of a stage in all his camp finery but the reality is that this was a recollection from a long time ago as Pitsenberger or Mr Pat as everyone calls him is not confined to a room in a claustrophobic retirement home taking covert  solace in More branded cigarettes that he is banned from smoking and meticulously folding napkins he’s taken from the homes dining area. Dressed in saggy trackies and dreaming of his dearly loved late partner David he’s a bird trapped in a cage.

His life as a flamboyantly gay hairdresser is another country but he soon finds himself travelling there when the lawyer for a former client, Rita Parker Sloan (Linda Evans). Rich , republican and rotting having recently died. Her last wish was for Mr Pat to do her hair for the funeral. It’s not easy for him as she had ignored David’s funeral yet the $25,000 she has bequeathed in her will as some sort of amends if he does her funeral hair. In a similar way to David Lynch’s ‘The Straight Story’ this sees the elderly Mr Pat set off on foot, hitchhiking where he can, after the lawyer refuses to loan him an advance to buy materials to do the job. It’s his journey that finds him encountering a variety of people who remember him that includes the former home he shared with David but now flattened, his former business premises now a black women’s hair salon and an about to close gay bar where he frequented and occasionally performed in drag and still managed to be more convincing as a woman than Gemma Collins. But he also faces his old nemesis Dee Dee (Jennifer Coolidge)  a former employee of his whose betrayal when she left taking his clients with him still stings.

As Pat Pitsenbarger Udi Kier is sensational in a stand out role in a career that has had him playing just about every character trait known. He is splendidly bitchy that’s partly a defence about a world that has long moved on and with which he is no longer familiar, ‘I wouldn’t even know how to be gay anymore!’ he says. Jennifer Coolidge, probably best known as Stiffler’s mum in the American Pie films,  unusually plays a straight role here and is very good perhaps let down a little by the script in a scene when she finally meets Mr Pat which should have had more bitchy zingers flying around from the pair of them. There’s an unexpected appearance from Linda Evans in an extremely rare screen appearance looking no different from how she was remembered from her Dynasty days and it’s that soap opera aura that encapsulates her role here. Ultimately though Mr Pat still has a bitchy barb for most people it’s a cover for how he looks back on his life in the town and that he should let bygones be bygones but there’s a final moment where Mr Pat can still raise a smile. Swan Song is absolutely Udo Kier’s film and his characters struggle to make a world that a younger LGBT+ generation owe at the very least some acknowledgement