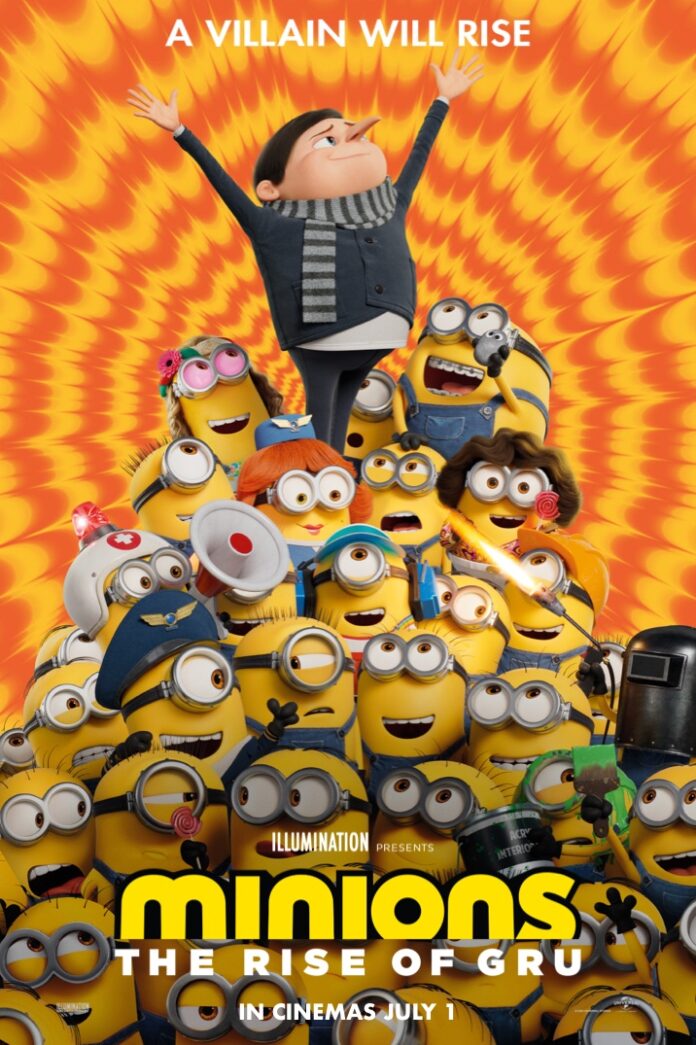 Delayed due to the pandemic we now have the fifth Despicable Me / Minions film aka Minion The Rise of Gru this time going back to the mid 1970’s where Gru was a budding supervillain at age 11 ¾ and wanting to be part of the Vicious 6, a collective of super villains led by Wild Knuckles, a moniker that’s never explained and presumably can only refer to what he was doing with his hands as a teenage boy. It’s him who steals a powerful amulet from a lair deep in the Jungle with nods to the opening scene of Raiders of the Lost Ark only to find himself double crossed by the rest of his gang of evil doers and left to his presumed death

In awe of the Vicious 6 Gru applies to join only to be laughed out of their lair underneath a San Francisco shop, Criminal Records. But to prove his worth he steals the amulet from the gang with the aid of the minions only for the yellow tic-tacs to lose it to an easy riding biker. So it is Gru and the minions attempts to recover the amulet and in turn pursued by the Vicious 6 (now 5) that takes up the rest of the plot with the minions learning martial arts from an acupuncturist and Gru developing his supervillain skills and making the acquaintance of Nefario a sort of surreal version of Bond’s Q (the titles for Minions The Rise of Gru are a direct homage to those of the Bond franchise) with an array of surreally devilishly devious devices.

That the film is intended as a Minions film is something of a misnomer as unlike the first spin off film they very much play second fiddle to Gru here and in that respect this could be Despicable Me 4. As ever the design of the film is enjoyably inventive and those old enough to remember Chorlton and the Wheelies may find the pointy chinned heads of several of the characters not dissimilar from Fenella the Witch in that series. It also falls prey to the celebrity voice syndrome because here though Alan Arkin as Wild Knuckles gets a significant role the Vicious 6 are voiced by Jean Claude van Damme, Dolph Lundgren, Danny Trejo and Lucy Lawless and yet barely have a few sentences between the lot of them to such a degree that really one actor could have voiced all of them with no noticeable difference.

The Minions have been one of the most enjoyable knockabout animated comic creations of recent years and there are a few easter eggs for the eagle eyed but the knockabout slapstick of the previous Minions film is unfortunately reduced here with an overall running time of 88 minutes which barely has enough plot to fill even that time. But that aside this is enjoyably daft even with the thinnest of plots and kids will love the continued silliness of the minions.