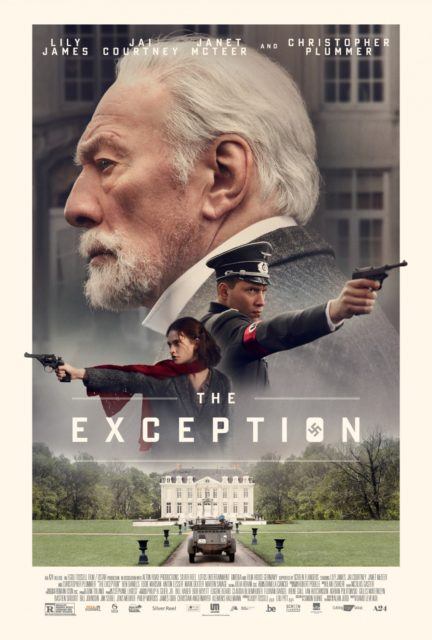 We’ve had quite a few war time based dramas this year including Bitter Harvest, Churchill, Dunkirk & The Promise and the latest addition is ‘The Exception’.  This is one of those true stories about secret agents and double crosses and has Jai Courtney as a German Captain appointed to protect Kaiser Wilhelm and his wife who reside in their Dutch mansion as World War II battles on.  It’s made quite clear to Courtney that there is to be no fraternising with the staff so obviously the first thing he does is get jiggy with one of the maids Lily James in one of the least romantic scenes of seductions we’ve ever seen. If the script is anything to go by it  appears that using the line ‘Take your clothes off’ works like magic although our Editor begs to differ having had his face slapped more times than Gary Glitter’s been stopped by customs officers at a Thai airport.

Courtney’s captain as head of security has to keep his ongoing relationship with the maid secret made all the more awkward for him when he finds that she is also Jewish. Against this he also has to contend with an officious local Police inspector, a vain Kaiser, his power keen queen and the imminent arrival of Himmler with a duplicitous plan which Courtney is entrusted to enact whilst at the same time aware that there is a spy in the household.

Jai Courtney has appeared in a load of action films that have included Die Hard 5 (or whatever its official title was), Suicide Squad & Terminator Genysys none of which had any critical acclaim and all of which featured his head photo-shopped to look like a potato although that could just be too many pre- film drinks on our part. His appearance has something of Tom Hardy about him and here he’s half way decent having to contend with a script with some outrageous exposition, (‘Himmler, Hitler’s head of security’). The script too veers between throwing in some f- bombs for modern audiences whilst at the same time it has characters use a somewhat po-faced ‘copulation’ instead. For the ladies Courtney gets naked probably because after Lily James has gone topless he possibly felt he would be contractually obliged in the name of equality. Lily James riding high after the success of Baby Driver is fine and Christopher Plummer and Janet McTeer are always watchable as the Kaiser and his wife desperate to regain their position in the German Empire and behaving as though they are still relevant to Hitler whereas its clear to all that their fiefdom extends no further than the garden of their home. Perhaps with this in mind it’s odd that the Kaiser is left on his own to chop woods in the gardens with no guard which seems which to be a spectacularly poor bit of close protection by Courtney as head of security for the household.  Himmler, an utterly despicable person, did have a somewhat comic real life appearance so when the always dependable Eddie Marsan does turn up in his best Himmler outfit there is something a little bit ‘Allo Allo’ about it all.

It’s an intriguing story but directed by David Leveaux, with an exceptional background in theatre production, has made a thriller that’s not as tense as it should be. Perhaps this will be an exception for any future thrillers he might make.