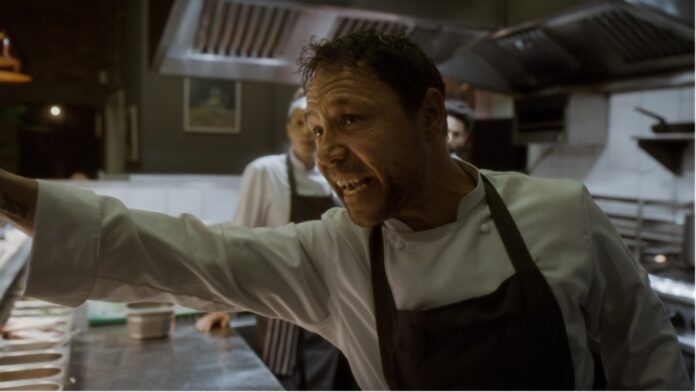 Every restaurant critic must surely look back on their careers and wonders just how much vengeful chef’s piss they’ve consumed in their career but the restaurant in Boiling Point as headed up by Andy Jones (Stephen Graham)  is one that is catching the attention of Londoners. And yet it takes a knock after an unexpected visit from an environmental health inspector who docks them two of their five stars. It’s the start of things hotting up in the kitchen and an early indicator that tonight things will get worse at the restaurant. Andy’s already got personal issues with his ex-wife and his child  who he barely sees and in fairness a chef’s hours are hardly conducive to a smooth home life but his right  hand woman in the kitchen is Carly (Vinette Robinson) who battles to keep a lid on his temper and  prevents him from taking it out on the junior staff. His other chef Freeman (Ray Panthanki) is far less forgiving of Andy’s lack of punctuality and disregard for keeping the books which has been the reason for the loss of two stars. 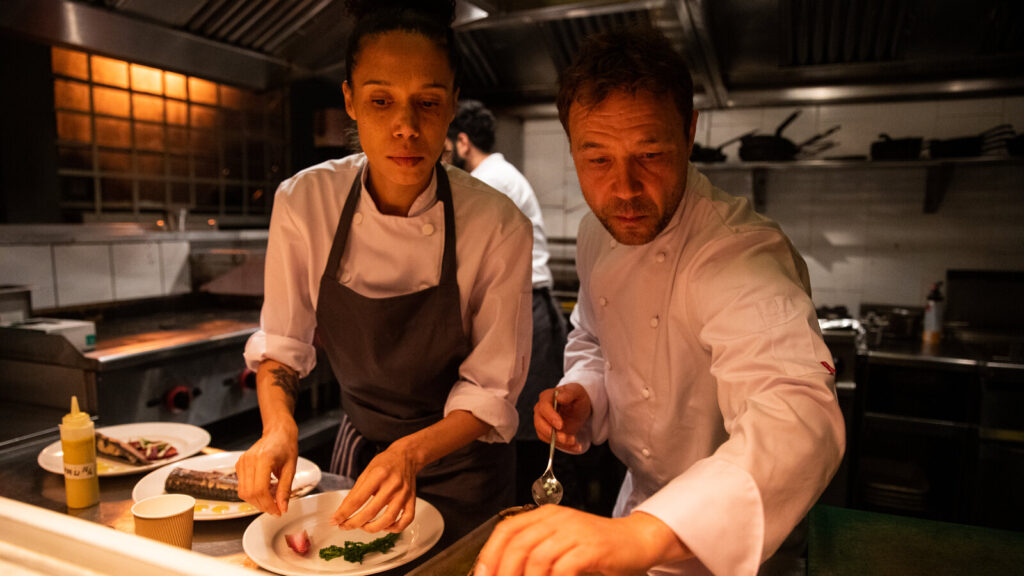 But Andy’s domestic problems are matched with his business problems. The loss of stars is only the start and is further exasperated with the visit of a celebrity chef Alastair Skye (Jason Flemying on good form) whose arrival catches him off guard especially when he brings along a top food critic and Skye clearly has an agenda. Thrown into the cooking pot also is a waitress is holding down the job whilst she tries to make an acting dream come true, another waitress has to deal with an arrogant bore of a customer, a young French chef at the restaurant is still finding her feet having only been there for a week, a young pastry chef is self harming, a bus boy is more interested in drugs than his work and the manager Beth (Alice Feetham) is increasingly out of her depth pandering to that curse of the digital age, the instagram influencer and like most of them, the tosser …. sorry influencer….is ill informed and just looking for freebies ignoring Andy’s exquisite menu instead wanting him to cook him steak and chips. It’s these characters who dip in and out of the narrative which make it such a tapestry of storytelling even if there are the occasionally obvious set ups most notably the customer with a nut allergy. The tension in the restaurant and kitchen is palpable.

Written and directed by Phillip Barantini this is engrossing with never a dull moment and never lets up and like Sam Mendes ‘1917‘ this is all done in one fluid take with no trick cuts or edit points. With the camera whisking in and out of the diners and kitchen it’s a piece of technical virtuoso work matched  by the always good Stephen Graham and an excellent supporting cast building towards a climactic moment. Boiling Point is mesmerizing with both cast and crew at the top of their game .