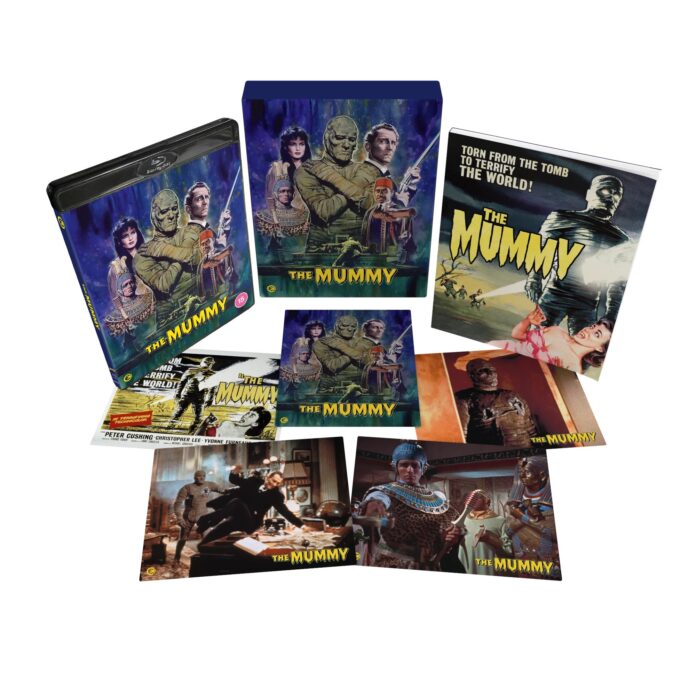 Hammer had had a run of successes with gothic horror that had included 1958’s Dracula and The Revenge of Frankenstein both of which were co-productions with Warners and Universal who had form when it came to classic movie monsters. Box office for each film had done so well that Universal were only too happy to allow Hammer the rights to remake The Mummy (1959)  as well as Phantom of the Opera and The Invisible Man.

Hammer’s version of The Mummy (1959) had Christopher Lee as the title character with a story set in 1890s Egypt where a team of British archaeologists, John Banning (Peter Cushing), his father Stephen Banning (Felix Aylmer), and  Uncle Joseph Whemple (Raymond Huntley) discover the untouched tomb of Princess Ananka (Yvonne Furneaux). Inside the tomb, Peter discovers The Scroll of Life and, when he reads it aloud, he unknowingly brings the mummified body of the high priest Kharis (Lee) back to life… Three years later and the group have returned to England, unawares of the nefarious consequences of their actions. A follower of the same Egyptian religion unleashes The Mummy to exact grisly revenge on the despoilers of the sacred past. As it edges nearer to exact its revenge, can anything save them from its relentlessly vicious and vengeful mission?

The studio were keen to throw in a bit of romance so a flashback to Lee as the high priest Kharis was included which studio head Michael Carreras was only too happy to include so happy that it was rumoured he shot extra footage of topless handmaidens in those same scenes unknown to director Terence Fisher.  Along with Peter Cushing Hammer had their top trio in the film with Lee co-starring  (in their fourth film together) and Fisher directing and the film performed well at the box office. Unlike the Universal films though this was a colour film….. lurid colour with violence galore and it marked a kind of halcyon era for Hammer establishing a reputation for highly enjoyable horror before the studio at the end of the sixties when their output was becoming a little campy and overtly sexual as it competed with the end of an era, competition from Amicus films and the dawn of a far more gritty decade of directors such as Scorsese, Coppola and DePalma.

This blu-ray release of The Mummy is an excellent disc primarily for a superb transfer of a film that represented a studio on the rise with three of its star names Cushing, Lee and Fisher who became synonymous with Hammer’s output.

This is another Second Sight release with their usual love lavished on this limited edition blu-ray release that includes:

Second Sight have furnished this with their usual array of excellent extras and a commentary from cast and director would have been the big selling point for the disc but with all of them having passed away many years ago its left to an academic and thought these can offer an insight they’re never as good as a cast/crew commentary who were involved in filming throughout. Nonetheless The Mummy is and remains one of Hammer’s best horror films.