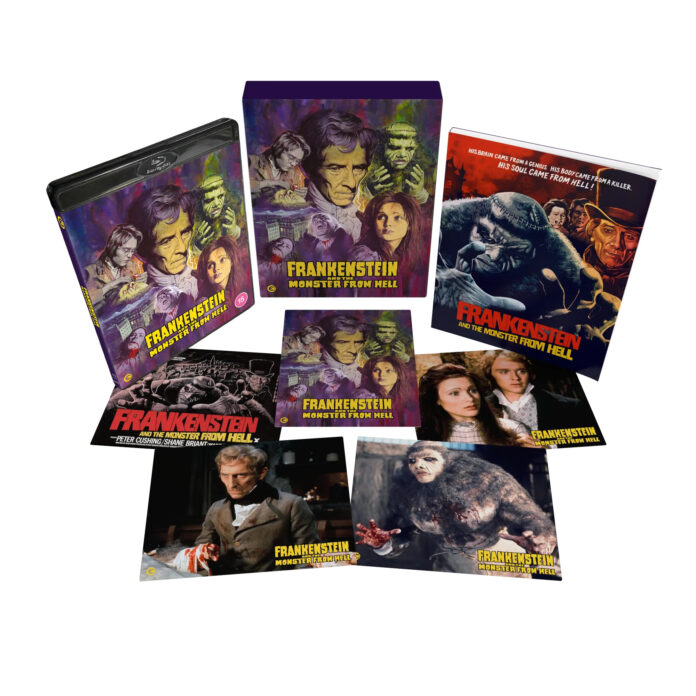 By the 1970’s the times they were a changing and this was especially true for Hammer. Their gothic horrors were starting to fall from favour with audiences and though the fans still loved the studio the wider cinema gong public were moving on to modern horror. Hammer would often finance their films with larger studios in exchange for US distribution but the US majors were beginning to reign in their overseas spending. Nonetheless the studio, despite the disdain which 1970’s ‘The Horror of Frankenstein’ was greeted with, pressed on with another Frankenstein film and cast Peter Cushing and hired the great director Terence Fisher for what would be his last film for Hammer.  Frankenstein and the Monster from Hell would be the last of Hammer’s eight Frankenstein films and the seventh for Cushing as the Baron.

Frankenstein and the Monster from Hell finds a young doctor, Simon Helder (Shane Briant ) who is committed to an insane asylum where the legendary Baron Frankenstein supposedly perished after being found experimenting on stolen corpses. He is quickly taken under the wing of mysterious Doctor Victor (Peter Cushing). But Simon quickly realises that there’s more than meets the eye with Doctor Victor, and that Frankenstein is alive and well and is continuing his macabre experiments…

Shot in 1972 but due to distribution issues the film was not released until 1974 by which time modern audiences tastes in horror had changed dramatically with a raft of ground breaking films led by The Exorcist and The Texas Chainsaw Massacre. So Frankenstein and the Monster from Hell and its gothic setting, despite some gruesome killings and graphic medical experiments, seemed dated almost immediately and paled in comparison with contemporary set horrors where there were no mythical monsters but rather satanic demons or serial killing humans. The film made a modest profit but was as nothing compared to The Exorcist’s $441m haul and Oscar nominations. 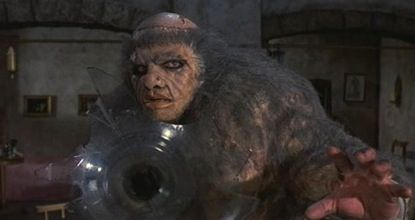 But that’s not to say that Frankenstein and the Monster from Hell is not enjoyable if not a bit campy and featured several Hammer regulars notably Madeleine Smith as well as a pre Star Wars Dave Prowse. Prowse had been appearing in a raft of films that ranged from Carry on Henry to Kubrick’s A Clockwork Orange and having played Frankenstein’s monster previously here he would play the ‘Monster from Hell’ which looked a little like the unholy union of Guy the Gorilla and a monk trying to apply eyeliner without a mirror. The cast give it their all and was the type of film that would sit comfortably in BBC2’s renowned late night Saturday horror double bill ( although unfortunately it never was shown in that slot).

This is a Second Sight release who, as ever,  have lavished it with bonus features that include:

The academic commentary is somewhat dry and ..well, academic so it’s the archive audio commentary which is a better listening experience with cast members Shane Briant and Madeline Smith sharing a load of anecdotes that makes this an essential extra for Hammer fans. Good too is the featurette on director Terence Fisher whose last film this was as director and was pivotal in many of Hammer’s best films.  Not the greatest of Hammer’s films but the bonus features alone make this another great release from Second Sight

Here’s the trailer for Frankenstein and the Monster from Hell…..