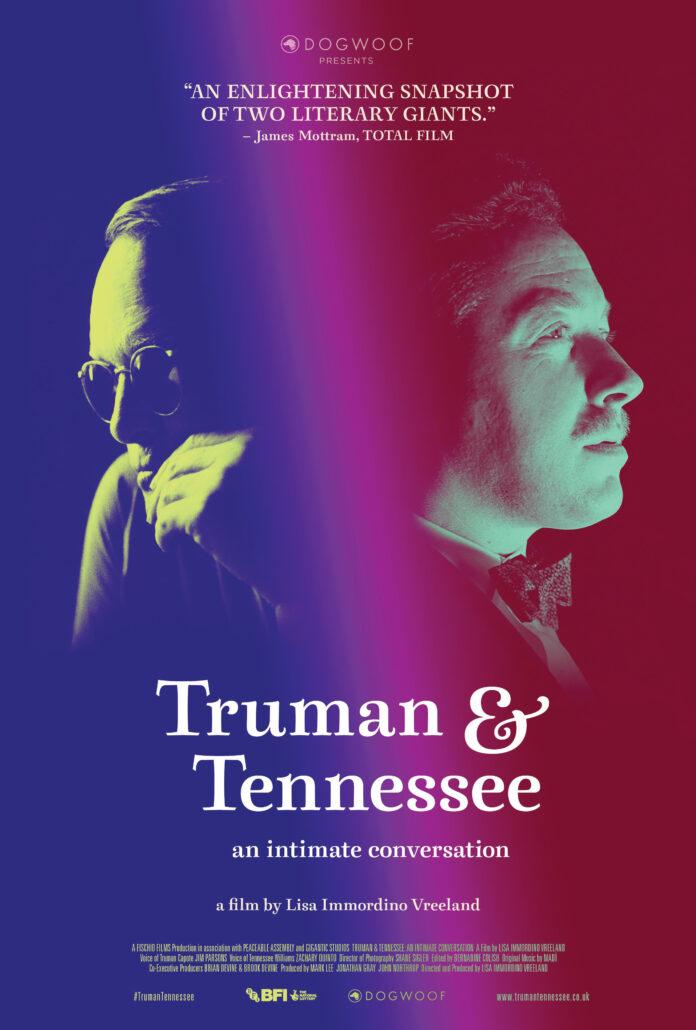 Truman Capote. Tennessee Williams. Both giants in the world of modern American literature. They were friends and rivals. Both were gay, both had a self destructive streak. Truman and Capote is latest documentary this made him a social outcast and drove him to drink and drugs. Williams himself was a prolific writer but also had a penchant for the bottle as is seen in several of the clips here as he slurs his way merrily through several TV interviews most notably with David Frost who had a knack for bringing out the best in his subjects hence why his interviews feature so heavily.

Truman and Tennessee were both complex men whose work came to the world’s attention in the 1950’s and the pair had a healthy respect, friendship but also rivalry for each other. The pair died within a year of each other but director Lisa Immordino unites them through the use of voiceover with Jim Parsons playing Capote and Zachary Quinto as Williams, both ideally suited to the roles, as they voice the letters and diary entries the pair made over the years.  Both writers dealt with their success in different ways – Williams was always disappointed with the film versions of his plays and Capote was suitably acerbic about his too. Both men had their own perception of society which was often biting yet always incisive.

Truman has already been the subject of a documentary ‘The Capote Tapes‘ earlier this year which recounted his downfall but for fans and students alike Truman & Tennessee is a fascinating further glimpse behind their persona’s. Two brilliantly talented gay men whose friendship did eventually turn sour hardly helped after the ever waspish Capote wrote a thinly veiled character in his final novel that was based on Williams.

Though there’s extensive use of archive footage this is a documentary that would be equally suited to radio but either way this is an engrossing exploration of a fractious friendship.

Here’s the Truman and Tennessee trailer…….

Truman & Tennessee: An Intimate Conversation – available in virtual cinemas & on Dogwoof on Demand from 30th April 2021