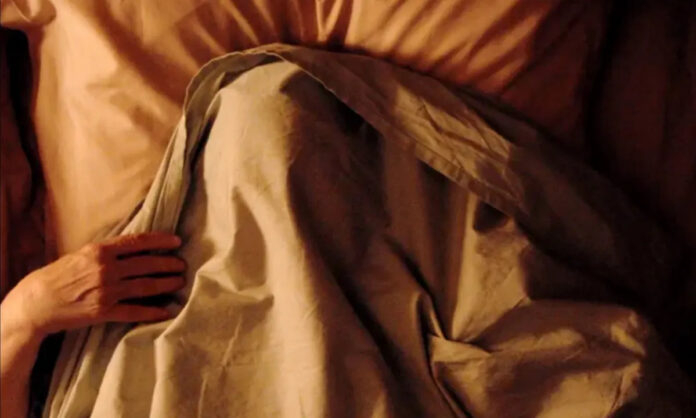 Vortex sees the Italian Genius of Giallo cinema Dario Argento properly appear as an actor for the first time. Our Editor is a huge fan of his work and it’s ironic that in a way whilst one makes stomachs turn indulging in horrifying spectacle the other is a respected Italian horror film director (‘You’re fired!’ – Ed). Argento, now 82 years old, has rarely appeared in films apart from the occasional fleeting appearance such as 1992’s film ‘Innocent Blood’ which served little more than to indulge John Landis penchant for cameos by his favourite directors and Argento’s signature is to make a feature of his hands appearing in his own films to commit on screen atrocities. His appearance in Vortex is something of a revelation. He plays the now retired Lui who is now writing a book about Cinema and the Subconscious. Lui is husband to Elle (Francoise Lebrun) a retired doctor slowly slipping into dementia and writing prescriptions for pills that clutter their Paris apartment. Their son Stephane can offer them little help suffering as he is from his problems as a recovering drug addict constantly on the cusp of a relapse. He wants them both to move into a retirement home as much as anything because he doesn’t really have the ability offer them anything beyond his own love but also because he’s not really up to it as he battles his own demons. Lui is vehemently against it understandably not wanting to leave the flat which holds so memories for him.  He is both stubborn and afraid like Brooklyn Beckham at a job centre.

This is an elderly couple in decline towards the inevitable and director Gasper Noe shoots Vortex in a resolutely unsympathetic matter focussing on the minutiae of their everyday existence giving the film an intimacy. Vortex follows their day to day decline for the films entire duration in split screen with both confined to their rectangular coffin shaped screens as they wander around the confines of the claustrophobic flat. It reinforces the effect that though they are together they are both alone. It is a gamble that pays off with the performances holding the attention especially Argento in one notable moment where he stumbles and falls in the flat in the middle of the night wheezing for breath in a long uninterrupted take that has you genuinely concerned for his welfare and that surely the crew should stop filming at this point to help him.

Several scenes are overlong and there are some unintentionally amusing subtitles notably when Argento frequently has a phlegmy cough and the subtitle reads, ‘phelgmy cough’ and mercifully his mother’s hobby is not collecting  butterfly entomology because the thought of a subtitle reading ‘Elle gets her brown wings’ doesn’t bear thinking about. (‘You’re definitely fired!”’ – Ed). Vortex, unlike Goe’s previous films is restrained both visually and emotionally and doesn’t attempt to pull on the heart strings in a way that any Hollywood remake would surely do . Instead this is his most mature and affecting film to date