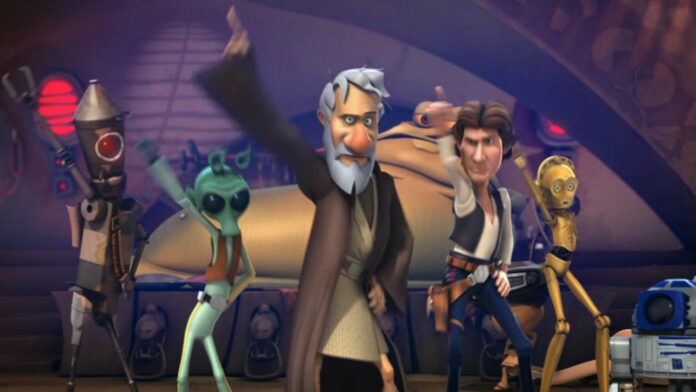 So whilst the 1978 Star Wars Christmas Special is the stuff of legend having been transmitted to audiences open mouthed in shock ensuring that it would never be transmitted again but there have been other Star Wars projects that have been made and but not even had one transmission. That project is Star Wars Detours.

This was a 39 episode series of short animated films which were made with another 62 further episodes having already been written and about to go into production when the plug was pulled.  The series had been announced way back in 2012 during Star Wars Celebration Day with Seth Green and Matthew Senreich, the creators of  ‘Robot Chicken, helming the project. But it all changed when Disney’s buy out of Lucasfilm was completed later that year.

The series was four years in the making with George Lucas on board too who Green said enjoyed the process immensely finding it laugh out loud funny as it was a parody of his iconic Star Wars films. But its possibly this that might have had something to do with it not getting broadcast. Green told trade paper EW back in 2021, ‘“The way it’s been explained to me is that there hasn’t been enough interest high enough up to go through what it would take to put it out, and that there isn’t an interest in releasing this content on Disney+ from Lucasfilm.” And as to whether it will ever be broadcast he added, ‘The most recent conversations I’ve had with anybody who would be in a position to say so say that it’s not soon.’

Which seems a great pity as the Family Guy send up ‘Blue Harvest’ showed there is an audience for a parody and even as far back as 1987 Mel Brooks had produced his parody ‘Spaceballs’ with Lucas’ approval. At the same time it is understandable that with the studio having spent $4billion on buying Lucasfilm they are understandably and perhaps rightly protective of the brand.

Zeros and Ones – REVIEW