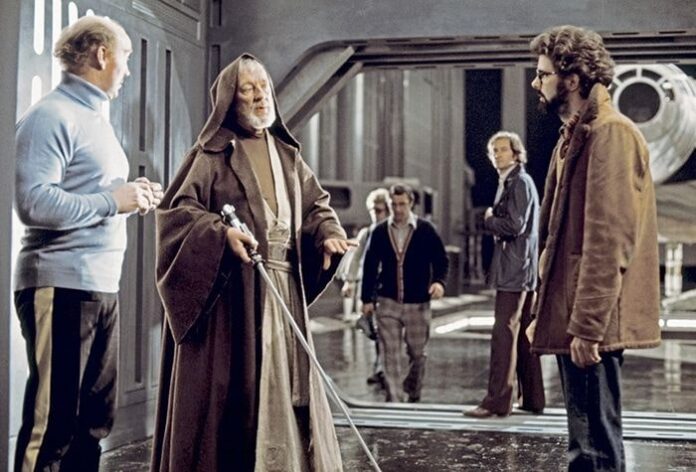 With the new TV series of Obi Wan Kenobi with Ewan McGregor in the role we wanted to take a look at the actor Alec Guinness who originated the role in the 1977 film Star Wars. But with actors earning a fortune from modern day blockbusters we wondered just how much was Obi Wan Kenobi paid back in 1977.

Alec Guinness was a highly regarded actor with an impressive back catalogue of over 50 films and an Oscar to his name for the classic David Lean film, ‘The Bridge on the River Kwai’. A modest man by nature committed to his craft his role in Star Wars would take him to a level of international  stardom he had never experienced or would be comfortable in. The role was pitched to him in January 1976  by writer-director George Lucas as, ‘a blend of the wizard Merlin and a Samurai warrior’ and Guinness eventually agreed to play the role  having got 20th Century  Fox to double their salary offer as well as 2 percent of whatever the film might gross plus an extra quarter of a percent once the film had wrapped. It would turn out to be a savvy deal for a film whose script he regarded as rubbish.

Star Wars opened on May 25th 1977 and was an immediate hit and went on to earn $307m worldwide eclipsing Jaws $260m which had been the number one modern day all time box office earner until then. Guinness had initially thought his percentage points might earn him around an extra $100,000 but by the end of its initial run it was worth $7m to him (for comparison in today’s value that would be around $33m). Not bad for a role that saw him on screen for only 20 minutes.

And yet Alec Guinness was reluctant to return for any sequel and when Lucas approached him in 1979 for Star Wars II as it was initially titled he reluctantly agreed feeling that he owed Lucas for the enormous income he had received from the films profits and didn’t have the heart to refuse. Alec Guinness died in 2000 aged 86 and after re-releases etc the actor had earned an estimated $95m from the film through his back end percentage points deal.

So that’s how much Obi Wan Kenobi was paid……..(at this point we would point out to any producers on future Star Wars projects that despite no acting experience we’re willing to take a role for less than half of Alec Guinness percentage points.)