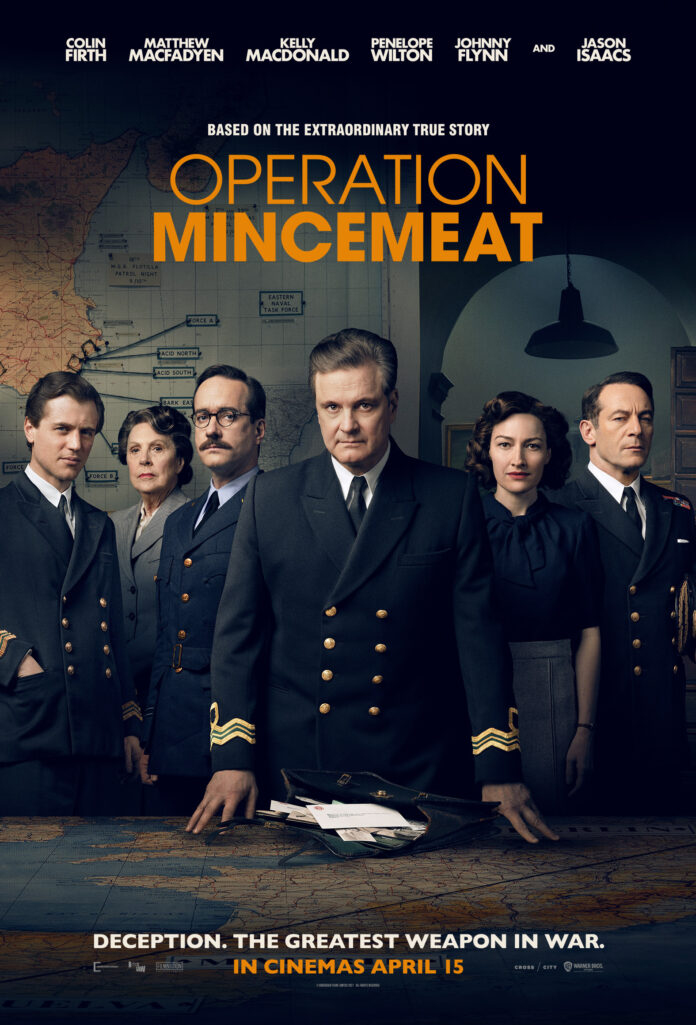 Such deceptive subterfuge goes on during war that it’s as much a puzzle to us as the Numbers round on Countdown is to Dianne Abbott as to how any of it ever succeeded. Operation Mincemeat was certainly the most brazen and bold attempt during World War II to pull the rug from under Hitler’s feet. July 10th 1943 would see Britain and its allies launch an invasion of Sicily and Germany were expecting it. But it’s Ewen Montagu (Colin Firth) a former Queens’ Counsel along with Charles Cholmondeley (Matthew MacFadyen) who formulated a plan that would hopefully lead the German High command into redirecting their troops to Greece.

Their plan was bizarre. Having located a nameless homeless man, dead from having eaten rat poison, they would create a new identity of a Major William Martin, dress up the deceased homeless man as such, ship him out to the coast of Spain and let his body wash up there containing allegedly top secret documents revealing the fake invasion of Greece. What could go wrong? As operation Mincemeat shows it was almost everything. With Montagu especially already seeing his marriage crumble and the suspicion from his superiors that his own brother might even be a Communist sympathiser so he pulled out all the stops to try and get the plan to work which in turn would lead to either saving a huge amount on military lives or its failure ending in wholesale slaughter of the troops.

A typically British film Operation Mincemeat is rounded out by a great cast led by Firth and supported by Penelope Wilton, Mark Gatiss, Kelly MacDonald, Jason Isaacs, Rufus Wright, the late Paul Ritter and the always excellent Simon Russell Beale who was equally good in the recent release The Outfit. Johnny Flynn, his co-star in that same film, is having something of a renaissance and here he plays fledgling Bond author Ian Fleming with a few sly winks towards his own super spy that he would write about after the war something which he mentions in a throwaway line and even uses ‘M’ as a code word for one of the officials

Operation Mincemeat rounds off a trilogy of recently released great British films that started with The Duke followed by Phantom of the Open all with a story of deception at their core. The story has been filmed before with 1956’s ‘The Man Who Never Was’ but it was only in 1996 that the plan was declassified albeit in typically British style by accident. For an event that happened almost 80 years ago there’s a generation wholly unaware of what a pivotal moment this was for the allies but also it is an indicator that it was the Brits who were so adept at this type of subterfuge even though it veered close to catastrophic failure.

There’s an inherent charm to Operation Mincemeat in what is a good old fashioned wartime espionage thriller rounded out by a plethora of excellent acting talent making this immensely entertaining.