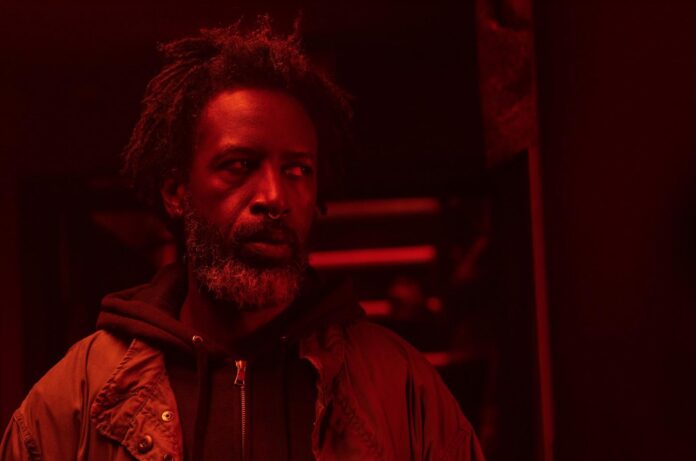 The montage has always been a staple for films and is used here as part of the title sequence for Akilla’s Escape taking in a third world country often described as poverty stricken, underdeveloped with little working sanitation, limited access to health care and often run by the politically inept but the film is not set in Stoke Newington or features Diane Abbott. Instead the montage is reflects the troubled history of Jamaica where Akilla (Saul Williams) grew up with  his self-appointed revolutionary fighter father Clinton (Ronnie Rowe) before fleeing to New York in 1995. It’s here where the film picks up with Clinton dead, now a bloody mangled corpse having ‘fallen’ from a rooftop and a 15 year old Akilla is bought in for questioning by police about the circumstance of his father’s death.

Fast forwarding to 2020 and a now world weary Akilla lives in Toronto where marijuana is now legal and the government is chasing down the previously illegal cannabis factories, one of which Akilla works for as a mule alongside a wheelchair bound Benji (Colm Feire)  who cultivates their particular strain of weed which has given them such success. But Akilla wants out and this drop off is to be, ‘one last job’ and which movie history dictates, much like Brooklyn Beckham tasked with ordering a margarita pizza delivery by phone, will go wrong. It’s at the drop off that he finds his colleagues being held at gun point waiting for the weed and the $150K he’s delivering. With one of the hostages hacked to ribbons Akilla finds himself staring down the barrel of a sawn off held by a one of the thieves, Sheppard, (Thamela Mpumlwana) who is instructed to execute Akilla. It quickly becomes clear that Sheppard is out of his depth with the sort of vacant look on his face not seen since passport control asked Gemma Collins her occupation. Akilla overpowers him but recognises the teen for the boy that he used to be and soon adopts a protective kinship towards him. It prompts a series of flashbacks that last throughout the film where Akilla’s father Clinton indoctrinates him on a daily basis into a gang mentality quoting Sun Tzu’s ‘The Art of War’ in ever more brutal fashion as Akilla climbs the ladder of drug dealing. Black cinema has moved away from this type of stereotype notably with the work of Jordan Peele’s progressive, multi-layered and often thought provoking films so it’s this aspect that is a little disheartening to see. Using CCTV footage and his own boss known as The Greek wanting to know the whereabouts of what’s been stolen its Akilla who tracks down the gang in a bid to not only get back the money but also to keep the peace so he can leave the life quietly behind him.

Written and directed by Charles Officer this is a gritty urban thriller held together by a stunning central performance from Saul Williams an actor, poet and musician who also worked on the superb score with Massive Attack. He is a brooding presence commanding the screen in all his scenes. It’s perhaps the films structure that weakens the film a little as it flits back and fore between Akilla’s childhood and how he got himself to where he is today and Akilla’s attempt to save Sheppard from retaliation by the gang in what is a parallel with his own teenage self. There are several very good scenes, all two handers with Akilla that include his meeting with The Greek who turns out to be a tough as nails woman as well as his scenes with Sheppard’s strong willed and protective Aunt. Quite how and indeed if Akiilla’s escape is managed is left to the very end in a haunting final moment that leaves the audience pondering just whether he has achieved it.