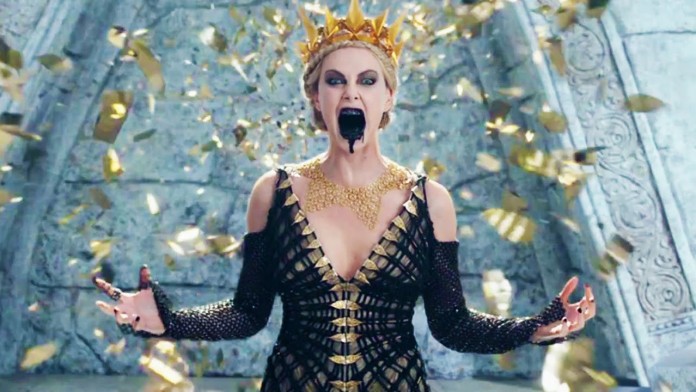 COUPLE IN A HOLE

A British couple ends up living like savages in a hole (this is not a documentary about Grimsby) in the middle of a vast forest in the French Pyrenees. This is actually quite a remarkable film.

A first-person action film from the eyes of Henry, bought back from the dead but with  no memory of who he is or how h came to die. To discover his identity he must save his wife from a warlord with a plan to bio-engineer soldiers. Bonkers mad action film. Even the trailer is exhausting to watch!

The latest Chris Hemsworth film is the clunkily titled ‘The Huntsman:Winters War whose plot concerns his attempts to thwart  the plans of evil sisters Charlize Theron and Emily Blunt so personally we’d have thought ‘ A right pair of witches and a beefy huntsman ‘ is more to the point but what do we know (‘Nothing’ – Ed). This is a sequel to the unexpected 2012 hit ‘Snow White and the Huntsman’ which made almost $400m worldwide so a follow up was inevitable albeit without Kristen Stewart who is busy trying to avoid press intrusion into her gay partnership (is anyone shocked by this sort of thing anymore?) So duties fall to handsome hunk Chris Hemsworth who, as a child, is effectively kidnapped along with a bunch of other kids by Charlize Theron’s sister Freya played by Emily Blunt who has gone a bit doolally since her own baby was killed. Freya, in what looks like a fairy tale version of an ISIS club for kids trains them all to be warriors becoming an almost unstoppable army. It’s only when Freya a non believer in the power of luuuuuurve separates  Mr Huntsman and his longtime love Sara (Jessica Chastain) that he decides to get his own back and in the words of Cheryl Tweedy….ur Cole… um Versini or whatever her name is this week and to fight, fight, fight, fight, fight for this love. Teaming up with a pair of dwarfs  played by the reliable Nick Frost and professional welshman Rob Brydon (whose made up to look vaguely oriental for some reason) and as they battle various monsters before they all have to face off against the evil sisters one of which sprouts malevolent twigs and the other reinforces her image as an ice maiden when everything she touches freezes. Frankly they’re like the sisters in ‘Frozen’ gone rotten but I’ll let it go, let it go, let it go……..(‘stop it’ – Ed)

The first film was visually spectacular directed by Rupert Sanders channelling Ridley Scott but the sequel has been handed over to first time feature director Cedric Nicolas-Troyan who had been the visual effects supervisor on the first film as well as directing second unit and here has been given a leg up to the big time and he embraces it well with some sequences a little too intense and scary for young children. Ultimately though the costumes are stunning and the winter sets are impressive – they seemingly have just let it snow, let it snow, let it snow……. (‘You’re fired’- Ed) but it’s not quite as striking as the original. Charlize Theron is deliciously evil as the queen (who we’re sure was bumped off in the last one film)whereas Emily Blunt as the more conflicted role of the sister is not so impressive and Theron’s presence is missed when she’s off screen which is for the majority appearing only at the start and the end for the climactic battle. As ever the plot is driven by vanity as Theron’s witch once again asks the mirror who is the fairest of them all. Something which the Editor cannot do without fear of the mirror cracking ( ‘nonsense!  the mirrors in the office are just cheap and break easily’ – Ed).

With Chris Hemsworth left to carry the proceeding this may be another film which his name is unable to sell as the sole male lead and is beginning to become something of a regular thing for him with only the Thor franchise being a guaranteed box office draw which the Marvel name sells rather than anything else because though films like Rush & Blackhat are good they hardly set the box office alight and The Huntsman is likely to carry on that tradition.

THE MAN WHO KNEW INFINITY

Growing up poor in Madras, India, Srinivasa Ramanujan Iyengar earns admittance to Cambridge University during WWI, where he becomes a pioneer in mathematical theories with the guidance of his professor, G.H. Hardy.

For those without children there’s little more irritating than new parents wanting to show them their new born baby needing no excuse whatsoever to whip out photos of their children at the slightest prompt usual at the most inopportune moments, …business meetings, funerals, seances.  Although the Editors children are a different matter which anyone would be well advised to steer clear of…. if anything the fact that they names are Damien and Adolf should be warning enough and worse still when he shows you a picture of them and you’re not sure if you’re holding the photo the right way round. And of course every parent thinks their baby is quite advanced for their age though quite how they know this is anyone’s guess. Perhaps it’s the toddlers in depth Marxist dialectic on the nature of international materialism that does it.

The boy in ‘Midnight Special’ is also special but in a somewhat different manner.  We follow Michael Shannon as the father of Alton (Jaeden Lieberher) who together are on the run from a cult consumed with the idea that this child has special other worldly powers and the FBI who also believe the same. It’s not made expressly clear what it is about the child that is so special that the FBI should want to get hold of him but the fact that the child has to wear swimming goggles throughout gives some indication that either his eyes hold the key – either that or he wants to go swimming but in a film such as this its likely to be the former.

The credibility of a cult is always undermined especially when predicting the end of the world and it doesn’t help when they gather on a hillside in preparation for the momentous event only for it to not occur and the group part ways with a cry of, ‘See you same time next week?’ Here, the featured cult led by Sam Shepherd are convinced that the end of the world is nigh on March 6th  so in light of previous proclamations by real world cults it difficult to take this bit seriously.  Director Jeff Nichols keeps things moving along with some well orchestrated set pieces including the FBI’s raid on the cult HQ and an especially impressive aerial attack on a petrol station – one of the few effects driven scenes in the film. It’s because the film keeps the effects and CGI to a minimum that when they do appear makes the scenes all that more impressive.

One of the strengths of the film is the unrelenting stony faced solemnity of Michael Shannon who manages to convey the predicament they find themselves in as they try to evade being captured and the FBI subjecting the boy to …….well, who knows what? Kirsten Dunst as the woman who helps them in their evasion of the authorities is underwritten but its Adam Driver as the sympathetic FBI agent who has the stand out role which gives the film some lightness to play off against Shannon’s gravitas. Joel Egerton pops up again in a largely silent role giving able support and urgency to their mission to keep the boy from the clutches of the FBI and the cult.

With the majority of the film shot in the darkness of night as they try to evade their pursuers the film (and leaves the audience in the darkness too as we try to figure out why this is happening) eventually emerges into the optimism of the daylight for an unlikely and moving ending. The necessity for the child to wear goggles is revealed bit by bit and the end shot is enough to prompt  post film pint pontificating about its meaning. For director Jeff Nichols this is a big step up in terms of budget. Ostensibly this is something for the sci-fi crowd with its elements of Close Encounters and especially Starman but a father /son relationship at the core of the story and poses questions for viewers. Just who is this boy? How do they know the world will end? What exactly is that ending all about? At just under 2 hours it’s perhaps a little too long and quite what a ‘Midnight Special’ is apart from what those lady’s offer who stand on street corners, is anyone’s guess!