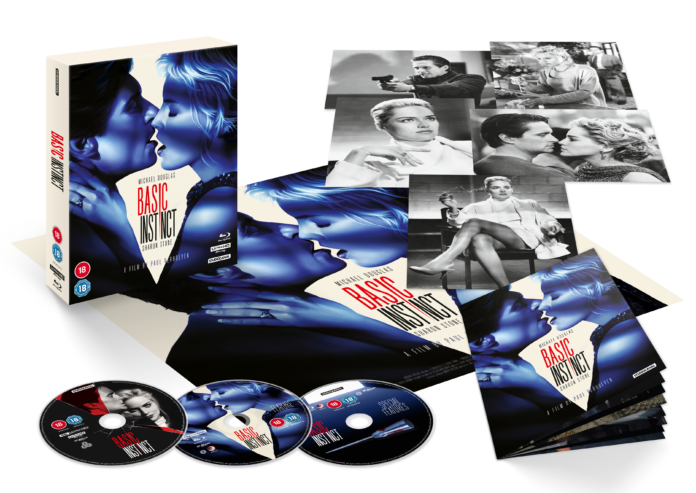 When Paul Verhoeven came to Hollywood from his native Netherlands it was like a breath of fresh air. To quote Austin Powers in ‘Goldmember’ that ’crazy Dutch bastard’ was much needed in the increasingly conservative centre of moviemaking. Having made one of the best satires dressed up as an action movie with ‘Robocop’ he then  made Total Recall with the world’s biggest star Schwarzenegger both were huge successes and the world was his oyster. His distinctly European sensibility to sex and violence made him the ideal director for the thriller Basic Instinct which would have both in spades.

The Dutch director took an interest in the Hungarian writer Joe Eszterhas script and it would be glossily photographed by Verhoeven’s Dutch DoP Jan De Bont. Eszterhas was as single minded as Verhoeven and the script, inspired by a cop he knew from his days as a journalist and a female producer whose reputation he was aware of,  had him writing the script in a couple of weeks with it selling within a few days in a studio bidding war for an unheard of $4m. It was the cause of much attention from Hollywood’s A –list and it was Michael Douglas who secured the role of hardboiled San Francisco detective Nick Curran a cop with a history of trigger happy shootings and a weakness for beautiful women and in this case its Catherine Trammell a novelist with a talent for seduction and a history of relationships that end in death. So when the her current lover, a former rock star, is found stabbed to death, she becomes number one suspect and Curran finds himself drawn into her orbit when he is assigned the case. It is an enjoyable thriller with lashings of sex and violence though its plot doesn’t hold up to scrutiny especially when lack of DNA analysis is a major plot hole.

It was not a particularly sympathetic role but Douglas was one of those rare actors who actively sought out those type of roles wisely seeing the often controversial scripts as having great film potential. He was right. Fatal Attraction had him in an adulterous relationship with catastrophic consequences and was an immense hit, Wall Street had him as an avaricious stockbroker earning him an Oscar in the process, and The War of the Roses cast him as one half of a disintegrating marriage was an hilarious yet bitter comedy.

The problem for actresses with Basic Instinct was the nudity. And there was lots of it and Verhoeven was adamant that that was exactly how it would he would be filming it. Understandably actresses soon backed off when they knew that as far as the director was concerned there was no room for negotiation on nudity clauses.  He had worked previously with Sharon Stone on Total Recall and there were several scenes in that which convinced him she could do the role but the studios wanted a name which at the time she was not. Stone had worked consistently since the early eighties but films like Police Academy 4 and Action Jackson were not really making her a household name. Basic Instinct would change all that. Yet it almost didn’t happen. She had campaigned heavily for the role despite the studios opposition but she turned in a great audition which landed her the role yet her first few days on set saw her suddenly realise how was much she had taken on and her nerves got the better of her and within the first few days she on the verge of being dropped until Verhoeven gave her a pep talk.

But her role as bisexual murder suspect was not without its problem for the production. Eszterhas at the time lived in San Francisco (watch what happened HERE when we were there working) when we  where the film was shot and the city has a significant LGBT community who, when they heard what the film was about, had them holding noisy protests at the various locations furious about what they perceived was a negative depiction of gay sexuality.  But Verhoeven was also savvy enough to know how he would shoot the sex scenes that would attract the ire of the censors and spent days shooting various angles & different shot sizes should they be demanded when the film was submitted to the MPAA.

The film was a huge success becoming one of the Top Ten earning films of 1992 and made Stone an immediate star with just about every one talking about THAT leg crossing scene. It’s a scene that she discusses at length in the French made documentary (‘Sex, Death & Stone’) on the  4K restoration of the disc and, excusing the pun, puts to bed how the most famous full frontal shot came to be. As an aside George Dzundza,  who appears in that scene suitably slack jawed in shock, was spotted by Spielberg and was the first actor he cast in Jurassic Park.

In the age of the internet and its gateway to readily available filth it is perhaps difficult to imagine just how big a deal Basic Instinct was at the time and only a director like Verhoeven could have made it the film that it is. The director has always been madly enthusiastic about his films so the commentary he does with DoP Jan De Bont is a great listen with a wealth of anecdotes delivered with his expected crazed enthusiasm. Equally for film scholars there a more nuanced appreciation of the film by leading feminist writer Camille Paglia who was vocal in her support of the film on its release and its depiction of strong women something that has always been a feature of many of Verhoeven’s films. There’s a lot of love gone into the newly issued restoration of the film which includes a very good ‘making of’, Stone’s screen test, storyboard comparisons and of course a new trailer. If you’ve never seen Basic Instinct or don’t own a copy then this double disc version of the film is well worth investing in.

Win a copy of the Doc Martin Christmas Special – The...