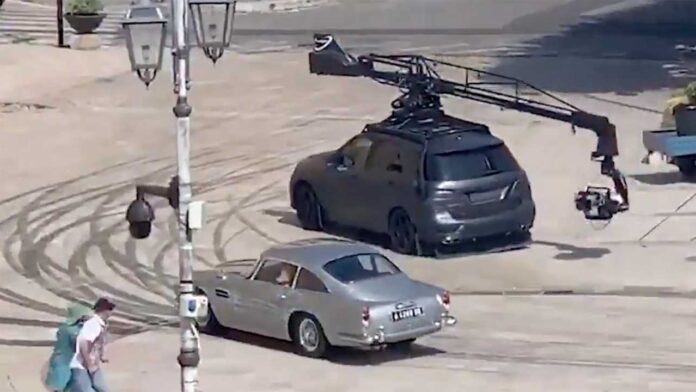 With the film on release we thought we would have a look behind the scenes of the No Time to Die stunts…….

The Matera sequence is brimming with exciting action and stunts and features a
memorable motorcycle jump, which was filmed on location in the Italian city. In the
narrative, Bond executes the jump, though stunt rider Paul Edmondson did the jump
using an ancient arch as a ramp. Producer Barbara Broccoli believes that this stunt could prove to be one of the film’s most memorable moments. “I think people will love that jump,” she says, “especially as it was done for real.” She also says that the fight on a staircase, which unfolds at Safin’s lair, will stand out as an unforgettable set piece. “The staircase fight is pretty impactful,” she says. “And so much of that is down to Daniel himself.” 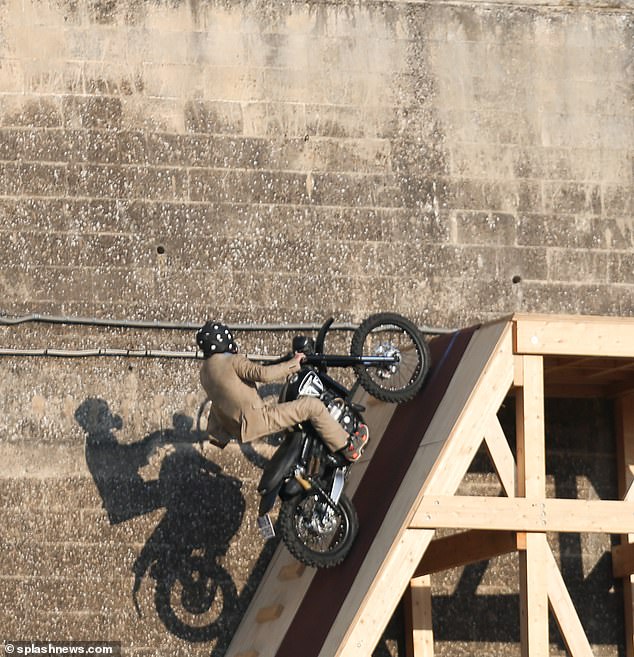 For the stunt team, one of the primary challenges of shooting Bond fight scenes is
balancing action that involves so many significant characters. Stunt coordinator Olivier
Schneider identifies the action in Cuba as a case in point. “Cuba was just one example
of a huge sequence that we had to design and rehearse,” he says, “but we had jumps,
fights, gun fights. It was a long process to tell the journey of so many characters at the
same time while also still telling Bond’s story.” 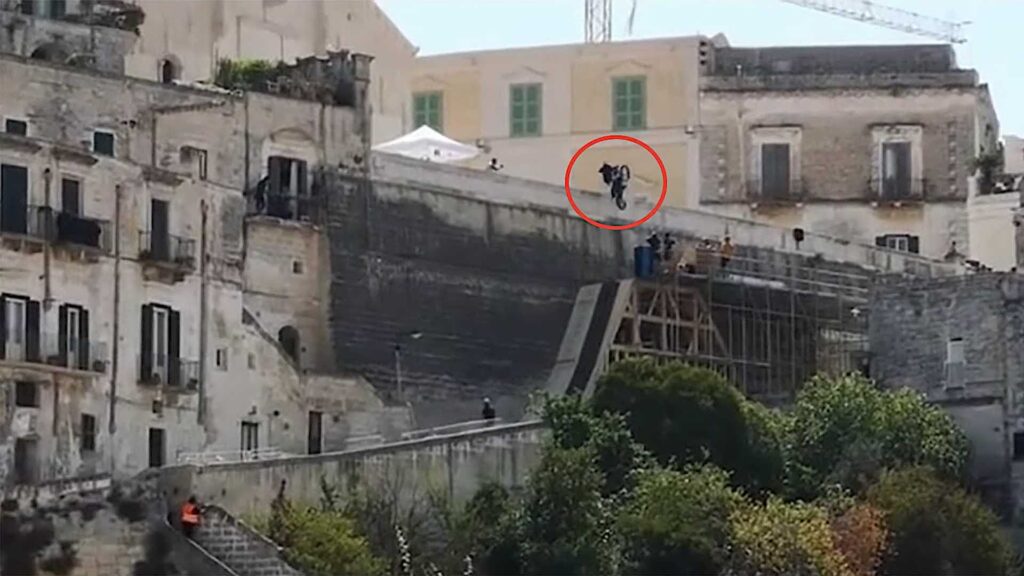 Along with ramping up the excitement, Fukunaga and the producers also wanted the
stunts to be realistic, and Craig always tries to put as much of himself on screen as
possible when filming his action scenes. “Because Daniel does the stunts himself, he has
huge input into how they are designed and created.” Broccoli confirms. “He wants to design them so that he is able to do as much as possible. Unfortunately, he had an ankle accident in Jamaica early on in the filming so we had to put a lot of the action at the end of the shoot, and he went under an intense physical rehab in order to be able to achieve it. It is really incredible what he managed to do.” Craig’s willingness to put his body on the line adds much to his character, says Broccoli. “Thanks to Daniel, you really believe that Bond is in peril or that he can get hurt,” she says. “He does get hurt and he feels it.”

Elsewhere, there is a perilous and emotional scene on a sinking trawler, where the ship
rolls over and starts slipping into the deep. “Once we established that was how it was
going to sink, we then started to create a rig that was going to do that,” Corbould
explains. The rig was built in the underwater stage at Pinewood where it was turned 90 degrees so that the staircases and engines stood at an unusual angle. “We then injected huge amounts of compressed air into it to give the appearance of it sinking,” Corbould says. ”And the actors did a great job swimming through it trying to get out. It was exhausting for them. It’s a long sequence and it’s very, very dramatic as well, with a strong story point in there.” Stunt coordinator Lee Morrison was mightily impressed with the rig. “Chris is an absolute genius, and the things he’s built for Bond over the years are mind-blowing, but this particular rig was a standout,” he says. Chris Corbould also masterminded the rig for the sinking lift for Vesper’s death sequence at the end of Casino Royale, which was shot on the same underwater stage. 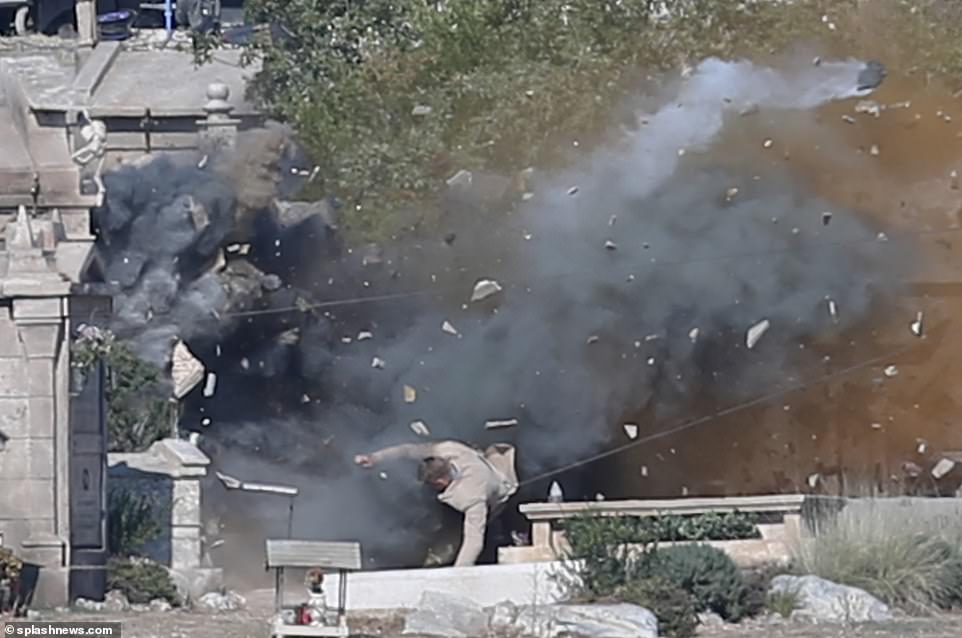 Another of Corbould’s greatest strengths is his work with explosions; the blowing up of
the villain’s lair in Spectre entered the book of Guinness World Records as the largest
explosion ever executed in a motion picture. There are two large explosions featured in
No Time To Die. The first ignites in Valdo’s lab. To achieve this explosion, the special effects team linked butane canisters together and used controlled, computerized detonators. “Cary was quite insistent that he wanted the space in between the explosions to be very short and to have a certain method to it. So we had to design the explosion very specifically,” says Chris Corbould. The film’s largest explosion occurs during the film’s climax and was executed by the special effects team at the Ministry of Defence site on Salisbury Plain. “We had to do three explosions in the one shot,” notes Corbould, “which represented three
underground caverns all blowing up, each explosion approaching towards the camera.” “The first explosion was 230 metres from the camera, the second was 130 metres from camera, and the last was only 30 metres from camera. Each one of them had 40kg of high explosive and probably 30-40 gallons of fuel. So while it was only three explosions, they were big, big explosions.”

After achieving a World Record on Spectre, the Bond team hope they might also secure
another on No Time To Die. “There is a record for the most high explosive in one shot,”
concludes the special effects supervisor. “We had 135.4kg in ours, so I’m hoping that
that goes through. It’d be nice to get a record on every Bond film!”

Read our review of No Time to Die HERE

Read about the No Time to Die car HERE