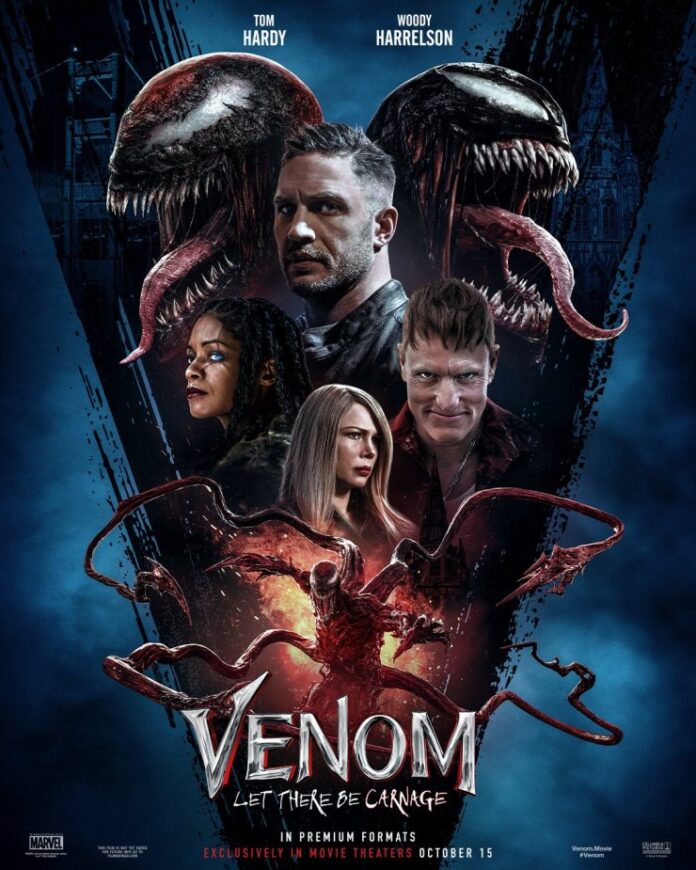 Like any marriage it is based on love and as any divorcee will tell you it usually ends with venom so it is ironically appropriate that Venom is something of a love story with Let there be Carnage hinting at what divorce become. The unsaid love story at the centre of Venom, is that between Eddie Brock (Tom Hardy) and the symbiote Venom who has taken a hold of his body. Tom Hardy also voices his alter ego and having played Batman villain Bane previously his version of Venom here sounds like Bane’s even more psychotic brother channelling the cookie monster. But it is host Eddie who wages a constant battle with the symbiote in a bid to contain Venom’s murderous desire to bite baddies bonces having grown tired of live chickens and chocolate that Eddie has limited him to.

Picking up from the end credit sequence of 2018’s Venom (reviewed HERE) we’re re-introduced to Cletus Kasady (Woody Harrelson)  way back in 1976 with his childhood sweetheart Francis Barrison (Naomie Harris) aka Shriek with an ability to temporarily paralyse anyone with her ear splitting scream – think Amanda Holden singing in a West End Musical and you get the idea. Fast forward to today and Cletus has been incarcerated for his serial killing spree seen in a nicely animated flashback. But now he’s on Death Row partly due to an incriminating newspaper interview he did with Eddie and now insists on giving him his last interview which Eddie readily agrees to in a bid to re -capture his fallen journalistic crown in the San Francisco press. Much like Prince William’s children when Uncle Andrew comes to visit, Eddie is ordered to keep his distance from Cletus when he attends his cell but when some symbiote DNA is absorbed by Cleetus……. Carnage takes over! 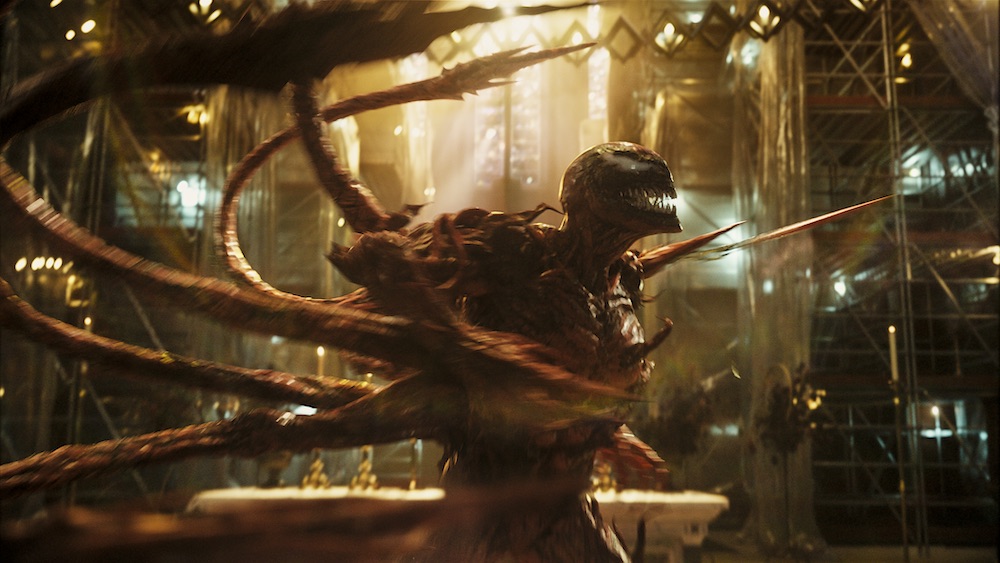 What follows is the expected mano-a-mano fighting usually reserved for the last orders at The Nags Head before the pub clientele are turfed out but here it’s on a larger scale.  Directing reins for Venom Let There be Carnage have been handed over to Andy Serkis and the bedlam is handled in proficient style but its the relationship between Eddie and Venom and their banter that is the real star attraction – one moment like a bickering married couple, the next Venom acting like Eddie’s subconscious and the banter is often very funny and outdoes the inevitable big battle between Venom and Carnage.  With support from an underused Michelle Williams and Stephen Graham largely superfluous it’s a lone scene with Mrs Chen and her corner shop that we would have liked to have seen more. As for end credit scenes…well in what is now an expectation from audiences this  hints at the future of the franchise which will please fans who will be keen to see how Venom’s story is potentially about to  develop.

Here’s the Venom Let There be Carnage trailer……